It does make me think that FL Studio is not using proper MIDI events for pitch bends and is instead using its own system, whatever that may be… Might be worth asking their development team for support or googling around for it.

Thanks for the advice. I’m going to look around, because you’re right. It doesn’t even keep the pitch bends when I tried copying and pasting the track from the non-MIDI version for the MIDI version. So I guess that’s something to note for FLStudio users.

I did find out that you can make MIDIs in FLStudio through the mixer. The issue is that the mixer itself has to actually have the tracks aligned for what they are “mapped to in the mixer” rather than simply assigning the MIDI instrumentation for each track itself. Then for each Pattern that’s the non-master Inserts, you have to assign instrumentation.

While it might not be useful for hacks, this means that you might actually be able to have each track change its instrumentation mid-song based on patterns. I don’t know enough about musical insertion in GBA files, but I’m curious if you could swap instruments mid-song. Since you’re not actually exceeding the amount of tracks allowed, but rather telling the track to play with a different instrument at a certain point.

I don’t know enough about musical insertion in GBA files, but I’m curious if you could swap instruments mid-song.

You can, using the Program Change midi event.

You can more or less do anything that MIDI is capable of, save a few options like Reverb etc.

Hello. I have a little problem with a MIDI, this one : Take The Offensive This is the MIDI File with the soundfonts

I extracted it with VGMTrans, and if you can find most track’s respective instrument without too much trouble, the last one is a mix of multiple samples. And I don’t really know how (if it’s possible) to make it sound good.

Is there any way to solve this? Thank you =)

It’s a drum track, so you have several options:

See this topic for more info on drum instruments

Either way you may need to open up the sf2 in Viena to check what notes are which because I’m not sure if all of them are just snares and cymbals.

To me to less painful path would be to export and insert the samples from the NDS game to the rom right? I’m gonna try that, thank you Agro =)

You could certainly do that too, although I worry about how the quality would sound in a GBA game. Give it a bash and make sure you install the sound improvement hack too

I meant create the drum instrument with FE7 samples

I was using the ELF method with Blazer’s Ultimate Tutorial, but then it requires his instrument patch which was a pain to find. I then learn that it breaks your ROM if it’s expanded, so that method can’t be done for me unless there’s some way to use the native instrument map in FE7.

Then, I looked into Sappy, but as I open it, I get an error message. 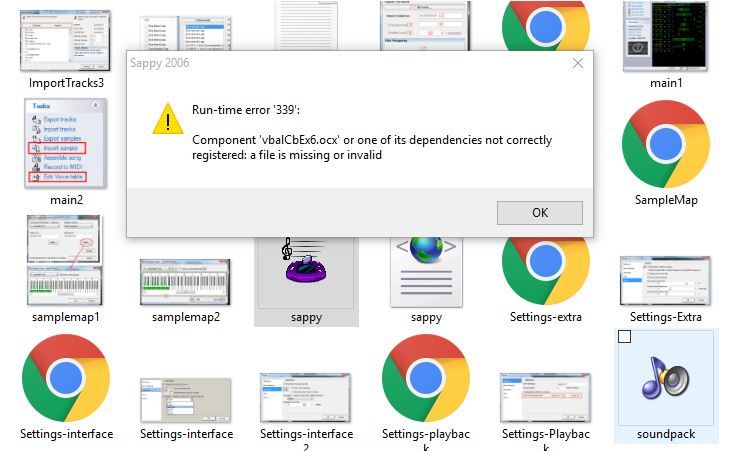 It was going great until I needed that instrument patch, and now I am just so confused.
Someone please ease my pain…

Abstract Sappy often displays an error that it can't locate a file called "VbalCboEX6.ocx". This tutorial explains how to rectify this error. The problem See above. The solution I give full credit to gogojjtech of the PokeCommunity forums for this solution, and might even link you to his tutorial because it's amazingly extensive. (edit: as of 30/4/2017 most of the youtube links and images in the tutorial are broken so it is almost worthless. for archival purposes I am keeping most of th…

The search button is there to be used, it tends to work very well

I’m very well aware of the search bar. I went to the site before, and the videos, photos, and most importantly, dropbox links didn’t seem to exist anymore. I assumed that that page was too outdated.

Thanks for replying quickly, though.

It looked very promising as a tutorial, but it’s worthless to me without the dropbox links. I’ll probably be fine once they’re fixed with that tutorial.

you don’t need his tutorial, all the necessary links have been provided, including a working version of Sappy. sappy is pretty self explanatory and the rest is already documented on FEU. the PokeCommunity link was provided as extra reading.

in future please also alert someone if a link is broken

All right. I downloaded Sappy successfully, (I think) and I open any ROM and it instantly crashes.

Sorry for messing you about. The sappy.exe must be replaced with this one https://www.dropbox.com/s/zybsqcwurrn3x01/sappy2006mod15.zip?dl=0 for it to work, which is something i thought was included in the download, and wasn’t

Thanks! It opens now.
If only Dropbox hadn’t updated, we all wouldn’t be having these broken links problems.

Time to try it out.

Well this is a really cool program!

I had my doubts from the bizarre installation and all of the broken links, but I’ve changed my mind. This should be the way to insert music!

I successfully inserted a one-track song, but it has some problems, and I have some questions.

Sorry to bombard you with all of this, but this specifically is new to me and somewhat confusing. I’d like to get this skill under my belt.