I love the anniversary status screen, but the gold color on the banner can be distracting to the eyes when it is used. Makes it slightly more difficult to focus on the actual stats.

That was my one concern as I finished up the darkening, but I didn’t have any easy solutions come to mind barring completely redoing or wiping out most/all of the detailing and losing the depth on it. There are no spare colors in the palette, so adding shades is out and changing any will change the rest of the gold that’s used on the left side. I can try darkening just the golds again and see if that helps or is more suitable for use?

Give it a try if you like, but I found some success in changing the gold to a blueish silver.
In other news, the background palette is misplaced for some reason on some of them. Might be worth mentioning.

Not sure I understand that last part?

A silver-y color could work. If you already have a rendition with that palette, I’d be interested in taking a look at it. 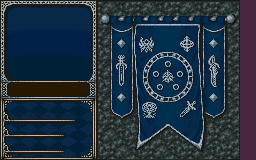 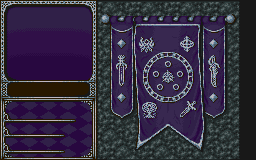 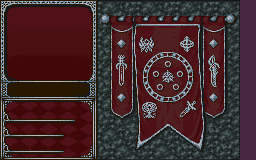 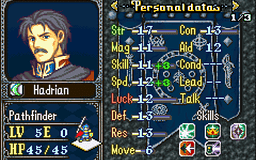 If you know of how to manually set the palette order in some program, it would be helpful, because the program I use doesn’t have a set palette order when I’m working in it and I can’t for the life of me figure how to just switch the order of the swatches in Usenti or GraphicsGale from what they automatically generate. (EDIT - Correction, my program will do palettes, but I have zero control over what index it assigns the colors in the order of the palette, not even the order in which the colors are added to the image from scratch.)

I’ve got a silver variant whipped up, but I want to get this palette order issue fixed for all of the versions before I post.

I used GraphicsGale. I copied the entire image, switched the correct bg color with the wrong one, and then pasted pasted to fix what switching the colors did.

Okay, I got everything fixed, I think. Took me a little while to get Usenti’s Swap function working and had to adjust for everything having the orders all over the place, but everything should be good to go and standardized between variants, especially if you want to try and pull off having the changing palette for allegiances as all of the banner cloth shades are at the same palette indexes.

Since there are now 24 (!) different images in total, it’s easier to just post a link to a ZIP containing ALL of them than to post each one individually: LINK TO ZIP FILE HERE

Had the idea for this one come to me in that odd morning state as I was half-asleep and half-awake one day - used @WAve’s FF2 Pandemonium tileset to do what I did for FE9 Ch 6 for FE5 Ch 24x.


Tileset: https://www.dropbox.com/s/e7kf6flcnxoj0bw/FF2%20Pandemonium%20Edit.png?dl=0
(Will likely not have the correct palette order due to the modifications I made to it*)

While doing this, if I had any feedback about the tileset, it’d be that there’s a little bit of palette overlap between the lighter blue floor tiles and some of the purple crystal elements which I had to modify in doing this palette edit. I also feel like there are a few more elements that are really needed to fully flesh it out - I added a Stairs tile (which I ended up not using anyway) as well as the 3x2 large door (which I again didn’t use) from the Fortress/Stronghold tileset as I noticed in the mockup screenshots in the Repo thread that it might be handy for the tileset to have if you had a more interior structure. The main source of issue that I had was trying to use the “top floor” boss area in conjunction with the rest of the tileset (as I wanted to mimic the Manastone floors that Evyel and the boss are on) because there just aren’t really any good transitional tiles to make use of and the way the floor had to be chopped up into a 16x16 grid didn’t really allow for many possibilities. In the end, I had to make use of the tile used for the top of the floating crystals, which I don’t even know if it’s traversable by units. (*If any of this feedback is taken into consideration for the tileset, I recommend using the edit linked above as only a guide so that the palette order can be retained from the original source tileset.)

The main idea on this was to have a map not entirely constrained by the objective of 24x while also opening up more freedom of movement, especially for fliers and/or rescue drops. The area at the top of the map could still be a “rescue Evyel” spot or it could be the new location for a Boss or even a defend point and the center “table” could instead be the “rescue Evyel” point or the Boss’s location (like in vanilla). Again, no idea what the movement rules are for some of the structures and objects, but the intention was that anything that wasn’t a wall, pillar, or the bigger crystal structures/statues could be flown over. (And then, used a couple of areas from games that I’ve played as inspiration for the palette and floor tiling choices, and boom.)

the tiles remind me of rpgmaker.
cool.

Jokes aside, nice edit.
Love the new palette, it reminds me of the “Heaven” dungeon from FF2. Clever way of linking the throne room to the rest of the map.
Thanks for the feedback on the tileset. Creating something for yourself is easy - but there’s always loads of things you miss when trying to make something for others to use.

For the palette, wanted to try and capture something that was spooky and otherworldly with flashes of color, which is why I went with the grey and desaturated purple for the main colors and the yellow/orange and blue colors (which fit perfectly) for the splashes of color. The throne room portion got magenta to evoke and be an homage to the Manastone terrain (as mentioned above). Also made it easier to draw from Diablo II’s Arcane Sanctuary and the Distortion Corridor from Radiata Stories for additional inspiration on the map.

I did remember one more thing that I forgot to add as feedback on the tileset - I ended up avoiding the 3x3 “galaxy” tile block and just stuck with the regular stars. I noticed on the sprite rips of the Pandemonium area in FF2 that there were more varied shapes to the gas clouds in them, so if it’d be possible for some more options, that would probably help as well. Maybe not as much as variety as typical grass has for its lighter or darker patches, but some diagonals and transitions to make things work smoother would make it a little more usable than just the 3x3 configuration.

After cranking out my contribution to the 1 Screen Mapping Blitz, I wanted to have some fun and wind down by featuring the map in a mock scene.

Like the last mock up I posted, the icons in this are not F2U or F2E. (Credit to Alusq for the Sassy Cleric battle sprite base and OreoStyx for the repaletted Pegasus Knight base.) 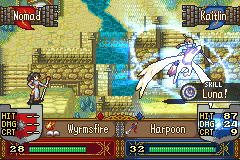 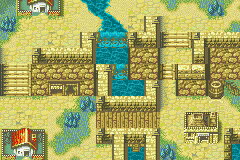 (I decided to work on these two things this weekend - at some point I’ll upload the files direct to the first post to replace the Dropbox links. Sorry!)

Since I got a notification that the topic had been linked in a list of resources, it made me realize that I don’t think I ever crossposted my old (Weapon) Icon Tutorial(s) from SF over to here. (Emphasis on “old”.) I figure, despite its age, it might still be useful to those that are just starting to make those kinds of graphics or otherwise might be able to learn or glean something new to enhance their current skills.

I would ideally like to do a new version of a tutorial for making icons as my style has evolved and grown in the almost 10 years since I posted Ver 2.0, but it wouldn’t be a video tutorial since it would take days for it to upload on my present connection speeds.

Since I don’t know how useful just seeing individual steps of my process would be, I guess I kind of want to open the floor to see if anyone has any questions that they might want insight on or something that they would want me to focus on if I do make a Version 3 revision?

Photobucket’d, a fate worse than death.

I have finished copying everything over with replaced images. You should now be able to actually tell what is going on without the semi-transparent Photobucket overlay obscuring the graphics. 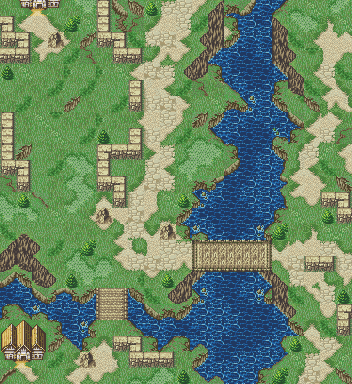 First time working with Zoramine’s Revamped Fields Village tileset - the higher cliffs and half-hills were why I wanted to use it, but also the elements I struggled the most with making use of with no prior experience on them.

I saw the topic about Advance Wars map sprites and it make me realize and be a little surprised that I don’t think anyone had tried to do a demake of similar tactics series Valkyria Chronicles but in GBAFE and making use of Advance Wars sprites to make it happen (even though VC is more about infantry than machines…), so it gave me the idea to try and recreate a map or two in GBA format.

This map is based on the Prologue from Valkyria Chronicles, Gallia, to Arms! Part 3: Encounter at Bruhl, though I took liberties with the design to make it more Fire Emblem-y, to use the full square map space (as opposed to chunks being blocked off like in VC) while keeping the major features - the bridge, the sandbags (as walls), the hilly west side of the map - and to make use of the extended cliffs and the hills in places where I thought they could fit.

Good use of the hill tiles.