Do you mean people should make their animations open source all the time?

Oh, so you are misrepresenting what I said. Okay, fair enough.

i quoted myself by accident *, but i still think that’s a dumb idea.

but yeah, not gonna veer off topic

I don’t see an issue with making generic ish animations free to use.

thought he originally was referring to all animations, including not generic ish ones

Do you mean people should make their animations open source all the time?

Yes? Is this a trick question? I mean, I’m following this post so…

What even is the conflict here? Thinking that Klok wants everyone to release all their stuff, even super special shit like lords? I’m pretty sure even Leon Kloksky wouldn’t expect people to release non-generic, character-specific animations. The cleric here sets precedent for what I’m going to do: release animations and map sprites ①after the demo containing them has been released, and ②after they have been sufficiently generic-ified.
My mindset in doing this is less noble/communist/whatever and more giving back to the community that I’ve been a sponge upon for the past several years.

Yeah. I never said anyone should. I don’t expect Yeti to release Tristan/Uther/etc, but if he releases the halberdier, the other generics, that would be admirable. (Actually I’m pretty sure he’s releasing like 95% of the generics in the distant future).

Only an asshole would demand or even ask rights to a specific character animation. But generics should be free for all. You give to the community, everyone gives to the community, we all reap the benefits. But hey, it’s just the exact same thing I said in that one thread that one time, and let’s not rehash that clusterfuck.

It seems to me that the entire conversation is based on misunderstanding (a misunderstanding that I have no desire to dig up and shove front-and-center again in an attempt to resolve), so I’m going to go ahead and leave well enough alone.

I decided to delay pre-release testing several days to almost completely revamp the non-prologue chapter that you saw a glimpse of in the screenshots:

Either we’re seeing Kelssian ingenuity at work or we’re about to intimidate the enemy with public defecation. Either/or.

The chapter pretty much fell into place once I got it figured out. ^ш^

Whoa, how did you make MOV 20? I guess the bases can deal with that, but I thought it was more than the game could deal with?

Venno made a hack to increase the maximum value for movement some time ago, so I bumped it up to 30. I use this to make penalties for weather less harsh (e.g. ×0.75 mov in rain instead of ×0.5; ×0.5 for fliers) as well as the armor/mounted bonus/penalty indoors. I also re-named mountains “hills” and made them give an odd-numbered movement penalty, so moving through a large swath of hills is a bit faster than going into the hills from plains. 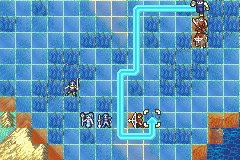 I spy two new mapsprites that aren’t immediately obvious as to what they are! Person-in-the-forest and the caster-girl (a cleric or a mage maybe?) next to the Soldier.

That’s Theln (commandant) and Demi (mystic— wind/lightning mage), yes. Demi still needs to be changed to look more magey and less clerical, though (that’ll probably happen once I make the actual generic mystic sprite). Axefighters are slated to get changed map sprites as soon as I get to the animations, too.

Will you be editing boots to give +5 mov instead, then?

I actually had no plans for boots yet, but hopefully!

While we’re on this topic, I do intend on giving the player nudges on game mechanics in-game: the movement system, magic changes, scarcity of luck, etc will be mentioned by villagers in earlygame houses (“don’t underestimate an armor knight indoors!”; “this is my pet pony! he doesn’t like stairs!”). I think I might add an option to have textboxes that spell it out for people wanting to know the specifics or people who wouldn’t get the hint, though.
Or I could put it in the readme. But that’s boring~

Or I could put it in the readme. But that’s boring~

Reward the players for doing what you say >:D Then halfway through the game, punish them for doing that 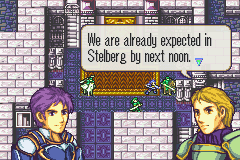 Because I’m going to have to move as fast as Theln and Ilya here if I’m to get my planned demo ready to play by FEE3. As you can see from our friendly neighborhood commandant’s slightly-more-immaculate hair, I did quite a bit of miscellaneous polish for the past month while having modder’s block on making actual gameplay. Now, though, polish is firmly on the back burner as I begin a three-week scramble to construct four-odd more chapters in time for FEE3!

Still one of my most absolute favorite upcoming projects.

Having a nice, leisurely stroll?

Boss-abusing so you can get Demi to level 20 with a Heal staff?

Maybe a little shopping break here and there? 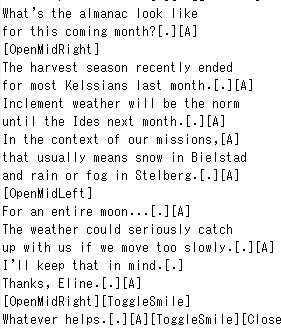 #MOTHER NATURE, MOTHERFUCKERS
Starting with the first of the three missions you go on, a turn count-influenced “clock” starts counting up, using event IDs to approximate if you took less turns than usual, a normal amount of turns, or way too many turns. If you spend too long bumbling around in ch1, you may have to trudge around in snow and rain for ch2 and 3… and ch4, which is already planned to be more challenging than usual, will become merciless with the added weather. If you’re playing on expert mode, it’ll be downright miserable. This loosely chronological weather system lasts all the way into ch8, where it will determine whether you fight in the midst of a mild flurry or in a blizzard with snowdrifts everywhere.

… I know I said that polish was off of the books for now, but this feature has been planned and is too good not to tease now that I’ve gotten to the chapters where it starts taking effect.

Edit: yes, I realise that punishing slowness by slowing the player down seems unintuitive. Movement penalties given by weather are less harsh thanks to the new movement system, though, and map design accommodates for it further with roads, indoor segments, and terrain that wouldn’t slow the player down much more than it does in clear weather.