All right. I think I’ve made enough stuff at this point to warrant keeping it all in my own thread.

I believe that this is everything I have ready to share at the moment. Let me know your thoughts. I’ll update as I make more stuff. Will prolly add music at some point as well.

So um, I almost forgot to post this guy I made a while back. I’ll probably use him as a mug for one of the Jagen/Oifey characters I was going to use (Baldur and Alruna are the two main characters and end up splitting up early on, so I’m giving the player a different prepromote depending on which route they take). Either that or as another boss character.

First, his default palette, if I use him as a playable character.

Yeah, another fairly splicey one, but I am rather proud of the chainmail. It took a fair amount more work than it looks to get it functional. Of course, I’m not great at spriting in general so, maybe it’s just easier than I made it out to be. Either way, you don’t see that too often in FE sprites and I don’t really want to give up the idea of using this guy because of that.

Then a possible palette for a boss version:

Wait just a minute… maybe if we just do something like…

Also, I turned most of my skill icons into a bunch of Tellius-style Skill Scrolls as well. 'Twas easy and quick work, so why not? 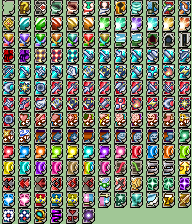 Everything that is in this post is F2U/F2E, just give credit please. And yes, I am still planning to use this char, though not the, uhm, crossover version in the hider XD

One more update to Skills and Scrolls, and this should more than cover everything I need out of these for my project for a while, so further progress on them will be slower going forward.

(“Discipline” does not have the “x2” included due to it making the icon feel too busy for my liking when I tried to incorporate it. Also, “Occult Scroll”

)
That said, if there is a skill you would like to see, you can always let me know and I’ll see what I can do.

As per usual, F2U/E with credit.

EDIT: Fixed some unintentional funk with the skill scroll sheet.

Time to get to work on some Map Sprites, Mugs, and Weapon/Item Icons. Wheeeeeeee~~

Preview of the Outlander map sprite if anyone be interested. tbh i kinda suck at these, but the only way to improve is practice, ig

Prolly not going to finish everything with him before work today. But when I do finish hopefully tomorrow but prolly the next day or w/e I will share the full sheet.

Brief update on stuff before I go make beef n cheddars for moneys.

(Not claiming this is the best map sprite in the world, but it works at least until I have a little bit more time on my hands to fix any mistakes. I have tomorrow off so hopefully

I can finish things then. )

F2U/E yadda yadda. You know the drill by this point lol

Love some of this stuff (especially the Eggman)

XD Thanks! I know I’m not the greatest, but I try to at least make it fun lol

EDIT: Realized I never drew the scarf on the l/r movement sprites. That is fixed now.

Also Idle pose was slightly off-center so that has been fixed. And scarf adjusted on it as well. Stuff lol

Been a long time since I’ve shared anything here. Not much, but here’s some skill icons I made last night and this morning. Includes a few (not necessarily good) attempts at FF14 skill icons ported to this style as well.

For a lazy day, I was surprisingly productive.

Did some fixing up of some of the old mugs a bit, and did some blinking/talking frames for them, as well as chibis.

Then I put together a few more skill icons.

So, idk why I never posted this here before, but I have a DeviantArt page. Got a lot that I need to upload yet (most of it is currently Pokemon stuff), but it’s there if anyone is interested at taking a look.

Also, I made a Discord server of my own for my projects. IDK if anyone is actually interested in joining it, but if you like my work, maybe think about jumping over there?

nice sprites in this thread