How to not use battle platforms in specific instances? [FE8]

So I found a patch in FEBuilderGBA that’s called “Don’t draw battle terrain” but when I tried to use it, instead of not drawing the platforms, it didn’t draw the battle sprites and everything just froze. I have a specific instance where I don’t want the platforms to show, and I have tried to get around this problem in other ways but it keeps causing unexpected problems. Does anyone know how to make this work?

You could make a terrain type that has completely transparent platforms assigned to it? 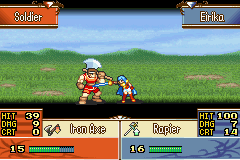 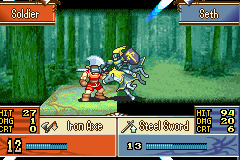 but “specific instance” sounds more like a cutscene thing so you can retain full control over it.

I’m basically trying to recreate the effect that the final bosses have, where you just have a huge enemy and a plain background, etc.

I ended up setting the entire chapter’s platforms to transparent, and that aspect actually worked fine…but I ran into an issue with the backgrounds I used for those events. They worked fine with animations on, but with them off it glitched the screen.

I was reconsidering because I would prefer if I could still have the platforms show up for other battles on that map, but idk if that’s possible or not.

It’s probably best to create a report.7z and post in the febuilder thread.

The problem is it’s an in-game fight with a boss that happens when you’re playing the chapter. I know there’s a patch to force battle animations on for bosses so I could theoretically fix the problem if the “Don’t draw battle terrain” patch would work. Then I could just have the boss fight not use platforms and the rest could work as normal, thus not glitching the screen any.

I think I will probably try that. I assume the patch is supposed to do what I’m trying to do with it anyway, so maybe no one has brought this problem to anyone’s attention yet.

Actually, I just figured out that the patch just makes the platforms disappear when you have the backgrounds turned on. That explains why it wasn’t doing what I wanted it to…

I haven’t received report7z, have you solved it?

I was going to, but I realized the patch actually did what it was supposed to do, it doesn’t do what I was trying to do with it. Would sending report7z help find another method to do this or is it just something that can’t be done?

If you don’t publish any data, there’s almost nothing I can give you direct advice.

The terrain doesn’t really matter when fighting huge enemies.
If anything, I think the cause of the freeze is the battle animation that is too big.
The trick when you want to put out a huge enemy is not to move that enemy.
If it don’t move, it’s okay to display a fairly large enemy.
However, there are limits.

Oh the freeze was just when I used the patch the wrong way. For the animation, I just wanted to remove the terrain in that battle to make it look more like the final boss battles in the GBA games. But I don’t know if there’s a way to do that or not.