How to do a chapter without the main lords?

Hey there, cactus here with a big prob this time.

I plan to make a intro where some ancestors of 400 years ago fought the big bad guy.
The map is done, the script is done, but the problem is:

I place my X number of units who will participate and the enemies at reasonable level.
Now, when I test the chapter or prologue part, it plays the Game Over music and screen after all the cutscenes and dialogue has occur.

I did use the command “Load Units. If player unit, join party.”, but still gives game over.
Do I really have to deploy the “Main Lord” to avoid this?
Is there a way to use X number of units without the protagonist and do not get the GO screen?

Call it a hunch, but I think you may have erased (killed) the lord unit in a cutscene. There shouldn’t be any problems with making a map that has no lord unit (in FE8, anyway). Use the REMU command to remove them from the party instead.

Changing the unit with Lord class to another class - problem solved

Autocursor function will go offscreen if there’s no main character, but would not cause a game over. Killing off character id 0x1 Eirika or 0xC(?) Ephraim with DISA would turn on flag 0x65 “game over”. There are a couple of febuilder patches to set the main character or to set various units to autocursor onto.

There’s a command that has a unit temporarily leave your party but can be enabled back at will; iirc it’s used in 5x to make Ephraim and co. leave the party for C6-8 but could be used for what you want. Just be sure not to use the one that marks the unit as killed.

Also you might want to check if the game over flag (iirc usually 65) or another flag triggering the game over events is active just in case; I was stumped on this about a year or 2 back for Resonance when I realized I accidentally enabled the gameover flag in the start event.

I would second the accidentally killed lord/flagged game over ideas because I actually asked this exact same question a few months ago when trying to do the same thing (map with no lord). It turned out I had tripped the game over flag in the previous chapter and it just never came into effect until I started playing the next chapter, so check every event going back, not just the one right before the start.

Mmm… seems complicated with all the options, but I’m gonna try them all. But after reading all of your answers I can say, you have to use the lords yes or yes.

Guess I’ll be making slight changes of history to my hack then.

Just to clarify, you don’t have to use the lord(s). I was definitely able to get it working without my lord deployed in the end.

Just throwing in another option, isn’t there a patch that allows multiple lords? So you can make one of the characters a “lord” but not really.

Never heard of it and I been searching for that patch of multiple lords, and yes, but that’s not the problem, the problem is that my specific unit will participate with another 2 who aren’t the protagonist as well him, but everytime I want to just put them, the test goes to the Game Over screen.

I putted the main protagonist (In this case Eirika) and the chapter flows and goes well done.
That’s the problem I have.

Ok, so why don’t you add in the real main character but hidden so we don’t know. And then remove them from party? So they are loaded in perfectly fine that’s what I did for one of my chapters

I will try the last one, seems more easy to do.

Perhaps was so easy but I wanted to do something very complex, that I fogged myself with the idea, I hide in a tile change (like some fort or something) the “lord” and the chapter went well.
AND even put the lord in the enemy lines but some random green unit killed it and called GG.

If you type in remu in febuilder event commands, it should show you the command you want I think.

If you need pictures to do this, please ask. Eg. “I’m sorry, but I don’t understand how to actually do this. Could anyone provide a screenshot?”

I would post a picture of the 1 line of using a remu command but I am not on my computer, sorry

It would help to do that, and about the REMU, I’ll think I’m going to experiment with the commands and see what they do.

I use “Remove Character [0x1 Eirika] from the party. (REMU)”
Therefore she is not seen on the map. But she is not dead. If we look at our units via the Connect to Emulator feature, we can see that she is Hidden, Escaped, and Captured as her status. 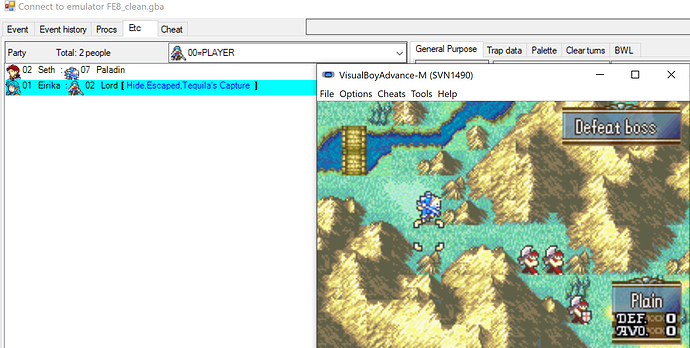 So in short: Use the command remove X unit and will work?
Great, amazing this explanation. Thank you once again.