This weekend I went through many projects and decided to upload some of them to GitLab for everyone to use freely. This includes tools that have never been shared and some old stuff as well. This list will be updated in the future whenever there is something new worth sharing.

All things that are listed here are open source can be used as you wish - you don’t even have to credit me since I mainly create software for this community because it’s fun.

Things for the future:

There is also still tons of old stuff that I could share as well in the future. It’s mainly stuff for presenting Fire Emblem data on the web, and conversion tools. Some of it is on old backup hdds though.

Currently I am porting my FE12 editor to WPF for the UI. I don’t know if there is any demand for custom romhacking WPF controls (Most people here seem to use WinForms which is great for prototyping but also very outdated) but I could share new controls as well.

Things for the future:

Here is a sneak peek of what’s coming next!
Since I dived deeper into the graphic formats of FE12 I developed some specialized tools for reading and writing to files. At one point I went for a more modular approach and started developing a software which I call “BinaryBlocks”.

BinaryBlocks can read image data directly from binary files and uses it’s own XAML based markup language that tells the software how exactly files should be interpreted. By loading customized definition files you can very easily modify the software to your own needs. It’s by far not limited to DS FE alone - there are a lot of possibilities for many games. Exports from BinaryBlocks also export image files with their exact palette with no rearrangements of colors or “optimizations” (Typical converters tend to eliminate unused colors to save space which is very bad for romhacking in most cases)

It supports reading Animations and exporting and importing GIFs as well as Sub Palettes. (Player and enemy sprites in FE games use Sub palettes for example) 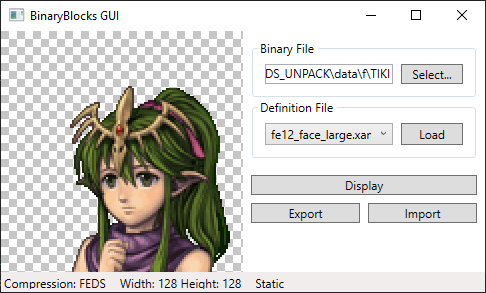 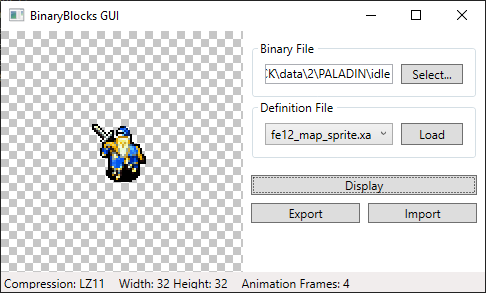 As you can see it’s pretty powerful. I am still working on documenting stuff and optimizing the software but I think I can release the software at the end of January / beginning of February. This is just a little preview. Also, here is a bonus.