First of all, don’t be expecting anything too comprehensive or impressive, but I felt I’d share a few of the little things I’ve slapped together for my own personal use.

IMPORTANT: When importing the item and affinity icons here using FEBuilderGBA, you want to “Import by reconstructing with specified value”; the third menu option when importing! The colors for the Affinity icons look very strange in the importable versions included in the zip file, but they should display with the proper colors (shown below) when drawn in-game!

What’s included? Well, firstly, and most significantly, custom Affinity icons made by yours truly!

Here’s a preview, upscaled, of the custom Affinity icons next to the official ones. 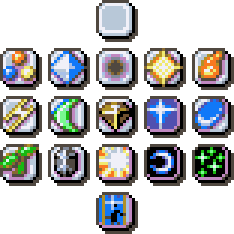 Starting from the center (just after Wind), it’s Tellius’ Earth, Heaven, and Water affinities, followed by Wood and Metal to complete the Wu Xing element set, and then Sol, Luna, and Astra… really just because I wanted a full 15 (one for each combination of four Affinity-boostable stats) and couldn’t think of anything better. Finally, there’s a special “Charm Affinity” icon that I was intending to use for a rare Affinity that would boost all six stats. All of that said, it’s totally fine to just use these icons for whatever! They’re mostly full-custom, save for the Sol and Charm icons, for which I just cropped the skill icons into the Affinity icon frame. The Sol icon is derived from the Sol skill icon found in the custom GBAFE skill icons set, while the Charm icon is derived from Charm’s icon in Genealogy of the Holy War.

Next, some item icons! In order, GBAFE icons for Poison, Ruin, Waste, Swarm, and Stone tomes, all derived from existing designs for those tomes in other games. This seems like an arbitrary assortment because it kind of is; I just felt I’d share it anyway in case it’d be of use to anybody. I’m sure other people have already done this, but I might go ahead and make custom GBAFE-style tome icons for more spells not found in the GBAFE games sometime. Eh… Maybe. If I feel like it.

Finally, this is like, actually nothing at all, but I included it in the zip file because why not? I reordered the frames in the idle sprites for the early Mercenary map sprite set so that the animation is smoother and less jerky. I actually can’t tell if it’s intentional that it’s how it is in the vanilla versions of the games, but it looks a bit nicer to me personally this way. Literally anybody could do this in like thirty seconds, but eh, here it is anyway.

I am back and toilsome bringing various things!

You can download a zip with all this stuff here!

Firstly, new affinity icons! The new ones with this post are Sound and Time affinity, on either side of Charm! Notes on importation in the OP still apply. 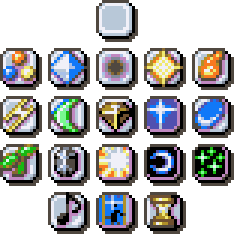 I also made some weapon icons, specifically for the Mace weapon found in Fire Emblem Three Houses! There are variants with and without the little loop guard the mace has in that game.

In addition to these, I’ve also made a few simple class card edits! In the order I made them…

A helmeted variant of the T1 Bow Knight class card! @flasuban also worked on the original for this one, as did @RobertFPY. All I did was some relatively simple splicing work.

A caped variation of the vanilla General class card! My intent was actually to use this for Barons, but you’re obviously free to use this for whatever. I actually had a lot of fun making this one, even though it’s just an edit and it only took me about twenty minutes, maybe, to get it looking right.

Finally, map sprites! To kick this section off, my own personal splicework; Priest/Cleric + Monk hybrid map sprites! These are meant for use with Monks who can also use staves, though, as usual, you’re free to use them however you please!
As well, a different idle sprite for Lance-wielding Barons, to condense the idle sprites down to 16x32 from their hulking 32x32. These are based off of Zephiel’s vanilla idle map sprites, and no shield is visible. It’s up to you how you feel about that or if you want to use them.

Next, some edits to map sprites in the repo! I’m not actually sure if Unknown is a user’s name, or if it just means the artist is unknown, but I’ve made modifications to the female Battle Sage map sprites to tweak the colors used on the shoulderpads (to keep the look consistent across factions) and, more saliently, modified the focus animation with a Myrmidon-ish touch to make the sword-swinging motion stronger.
I’ve also created a little splice-edit of Der’s (which Der? @DerSlendy? @DerTheVaporeon?) touched-up Archer sprites. Really I just slapped a Journeyman head on them for a sort of makeshift Hunter map sprite set. It’s not much, but I hope it proves useful nevertheless!

Are there a bunch of map sprites missing here, or just that General’s moving animation? I see lots of ‘bars’ but I’m not sure if they’re broken images or sth else.

Oh, my apologies! Nothing is missing here; the bars were my attempt at buffers to separate out sets of sprites that go together. For the Baron, there’s just the idle frames right now, which I had made for myself to use along with the Lance Baron moving map sprites in the repo. I might make shieldless edits of the moving sprites to go along with this, too, but for now it’s just the idle. I kind of came to the conclusion that there was no good way to show the shield clearly underneath the cape there, so I decided “just pretend it’s somewhere in there and you just can’t see it”, haha

Sorry for the confusion!

I actually needed something exactly like those staff wielding monk sprites. Nice work!

Happy to help! I hope they work for you!