To be honest, I tend to be accurate to some extent, that is why it is what it is.
It just didn’t feel right to subvert what is told without proper reason.
And changing the story for it is off the table.

I wanted to know on your very first run.
Who was your MVP boss that you recruited? 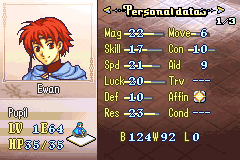 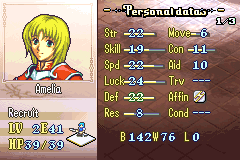 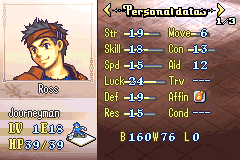 Blessed trainees I ever had. 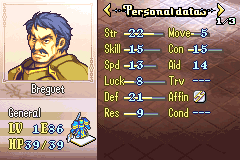 Despite bad bases, Breguet can still pull his weight quite well.

Can’t compresise the folder for some reason on my phone…

Update: A new update for this hack.

1: Buffed Gheb bases and growths to help with his Horrid bases.

2: Added a few more battle quotes between bosses, Text doc tells who has a battle quote with who.

3: Added an event on Lagdou ruins floor 10. (Must be in Creature Campaign)

Update: I discovered an oversight and fixed it.

Please re-download the patch to add the fixes in.

New Question Lol: Just got to chapter 17(where Alanna is), but I have yet to see Nico OR Evan: are they in a later chapter, or are the groupings in the doc inaccurate/out of order? REALLY hoping it’s the first, cause otherwise I seemingly inadvertently cheated myself out of a Recruitment waiting for them lol(also, would it be possible to get the chapter they appear in slapped onto the doc as well?)

Nico and Evan are on Ephraim route

Huzzah, now I know I got screwed out of a recruit cause the doc doesn’t state that at all XD

I really love this hack, finding it sent me spiraling into FE 7 and 8 rom hacks in general. Even learned how to do a bit of rom editing myself, so thank you for your hard work making this!

P.S. If you ever find yourself wanting to revisit the hack to add recruitment, battle or support dialogue, I’ve already started mapping out a bunch of that stuff. I plan to add it into the rom for my own personal enjoyment, but would have no problem working with you to put it in the official release if you were so inclined!

Now that sounds promising right there.

What are gheb’s hard mode bases?

Forgot to mention this but it seems excusive to Ephraim mode, bone vs bazba worked fine when it was erika in the same playthrough

That is because of how the battle quotes are handled in the data.
It goes from top to bottom, so you need to trigger the standard battle quote Before trying to
trigger the boss vs boss quote.

Okay, that makes sense! Thank you!