I have my first submission for the repository! (hopefully everything’s set up right!)

The class is intended to be a speedy flying class. They have above average Res, but low Def. Their Str is average, and 2 of their class weapons have nifty effects (Succubus should have a lower than average Con so the weapons weigh them down a little as balance).

Scythe is the most common weapon they will have. Hell and Libido are heavier to balance around their effects (So Libido will usually only hit 2 times on the Brave effect for example). Late Game they will have Fervor’s Cut instead of Scythe.

Scythe Monster Weapons (if kept exclusive to Succubus and her eventual T2 version) would have a bonus against Male units (assuming that’s an easy to program thing).

vv Some Screenshots of her in action vv 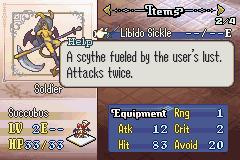 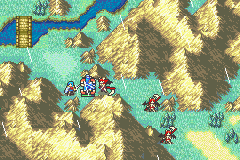 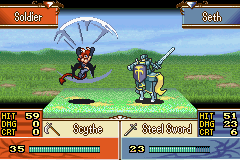 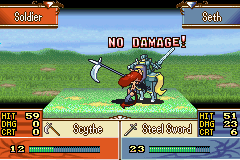 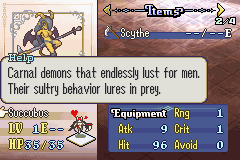 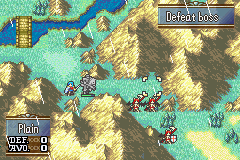 Everything should be in there and (hopefully) it’s all set up the proper way to be submitted. 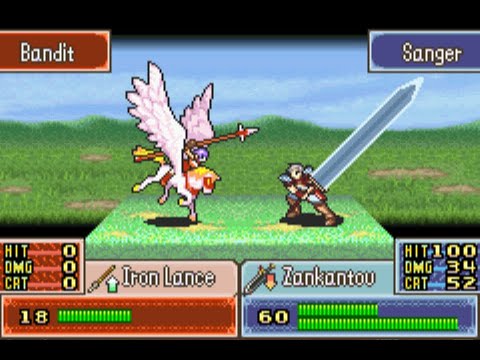 EDIT: I changed the lance animation. The previous one was too big and could cause issues. The latest one seems to work fine.

Very happy to be able to share this at last. It’s an edit of Zephiel. I tried to make him more like a generic unisex general promo. I gave them animations for lances, swords, axes (including magical axes), handaxes and unarmed.

Everything here is free to use and free to edit, just make sure to give credit to everyone involved. There’s a credits segment near the end of this post.

Palettes
I made palettes for the four factions and also for Gilliam, Amelia, Duessel and Tirado.

Class Card
I Frankenstein’d a class card. There’s two variations for each of three tiers, one where the frame is not mirrored, and one where it is; For a total of six variations.

Map Sprite
There’s both moving and stationary map sprites. The stationaries are 16x32.

Gimme credit for everything else not mentioned here. If I forgot anybody, feel free to tell me, I’ll correct it ASAP! 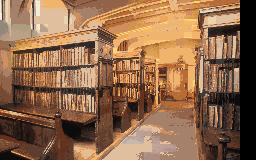 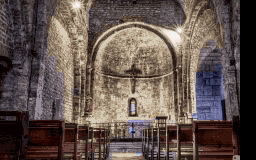 A medieval church. The image is originally of Le Castellet Church. The picture was taken by Mark G. C. Photography, and was obtained from https://marcgcphotography.com/le-castellet-medieval-church-france/.

Maybe I’ll make more backgrounds like this eventually. For now, just have fun using them!

WAve, epic mapping stuff man that he is, has created wide bridges and additional buildings to add to the Fields tileset. These are both great additions that help a lot for making maps more complex and interesting.

But now, with my latest project, you can use both at once! 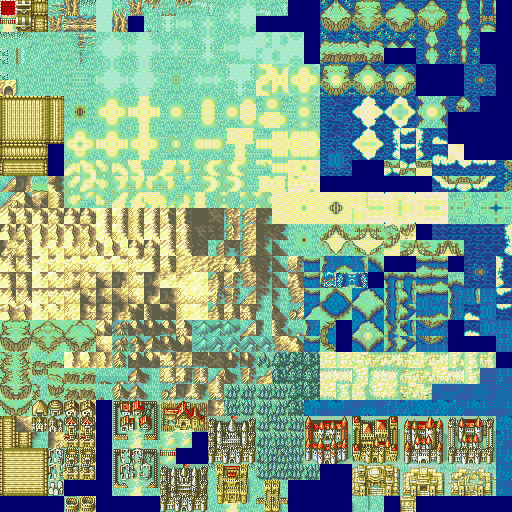 You may also see I’ve added a few other neat things. Feast your eyes on not only wide bridges, but also a new cliff tile (just below the top chunk of wide bridges), new deep water tiles (in the top right), village gates connected to fort walls (bottom middle, next to the basic fort), and more!

Here’s a sample map to demonstrate what the tileset’s capable of. 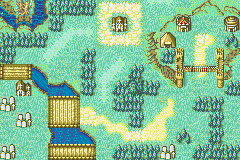 Download the tileset (and the sample map as a .tmx) here. Give credit to both me and WAve; he’s the one who made the buildings and wide bridges for me to insert, after all.

@Leo_link suggested cutting down the primary colours for the armour from four to three, freeing up another colour that used to be shared between the cape/gauntlet/helmet plume and the weapon hilt/armour trim. Hence, here’s a repalette of my Generic Zephiel edit.

Download
It uses the pre-existing dodge from the base game and most of the animation is based off a random old youtube video I stubled across by a youtuber named noonog. The video description invites anyone to animate it, so it should be fine permission wise.

It has a ton of palette freedom and I feel like the some of the timing could be improved, so if anyone wants to try getting more creative with it, go for it.

I added a magic axe animation for Nuramon’s Armored Wyvern Lord Axe animation and felt I should share it in case any one wants it.
Download

I made an edit of Leo_Link’s myrmidon, which I decided to call the pants myrmidon. I fixed up the legs and made the pants and shirt a seperate color.

And here’s a video demonstrating. 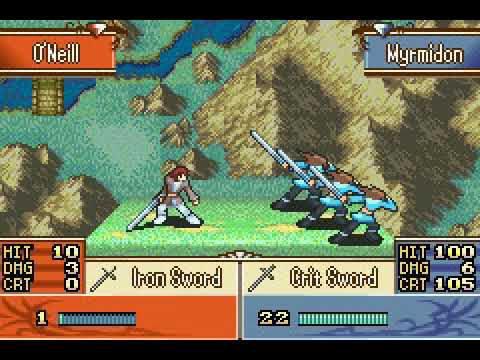 All righty! Here’s the link to a Google Disc folder with my 24 animations. Hopefully I’ve formatted them properly.
https://drive.google.com/drive/folders/1y9_fwUz1dcXdgErr0w0XCsTYIxUzDhuK?usp=sharing
If everything is ok, can I expect for this to make it way to the site or are there some other things I must do?

Here’s the updated Malig Knight I was talking about earlier. Nothing too major; just changed the armor, making it more sharper, and making the wyvern pauldron more consistent. Its been an issue I wanted to fix for the longest.

@JeyTheCount Here’s the download if you want to change the lance animation of the Malig.

I have a portrait I’d like to submit. Credit goes to both yours truly (CranJam) and ltranc for helping with editing the colors and the mini mug… Oh, and it’s Fergus from FE5. I know most people here know that, but there might just be someone out there that doesn’t.

Touched up JeyTheCount’s SALVAGED Mercenary female edit to fix the frames where the male merc’s small breastplate thing was still visible, and magic sword frames where the arm shading was inconsistent between each stage of glowing. No unarmed animation because it’s compatible with Jey’s one, since the unarmed doesn’t have these issues.
Download

Actually the whole body + the shadow shifts for one frame on the ranged animation, whereas it doesn’t on the male. Was like that in Jey’s too. Will upload a fix in a bit.
Fix is uploaded

I have created an edited version of the Dark Breath Animation from SHYUTERz and, with his permission, am posting it for others to enjoy. It’s blue, but I made different versions with different colored lightning, though I feel that the black looks the best.

Making use of Terasparks repalette of FE6 Fae because 32 color is wack, I created Fae FE8 manakete by merging the transformation animations.

Follow up to the Camilla mug I made with some minor cleanups, lip flaps, blink frames and chibi. This is my first attempt at making a mug from scratch so there may be issues.