Hello. I’m Noltra and I have been working on a ROM Hack for six months. This ROM is an FE8 hack and it has 50 playable characters, 100+ playable classes, 50+ unique weapons, and 20 chapters. The main story is complete and the gameplay is also complete. I plan on updating the game at a future time to include minor changes like supports, character description, and class description and all that but I just want to share the ROM now. I hope you guys enjoy it and let me know how you feel about it and what I could add to it. Here’s a trailer of the ROM: https://youtu.be/cqkO9jX2Ve4

Here is where you can download the game and check the resources that I took from the FE Repo: https://drive.google.com/drive/folders/1wiB0kjJryiOiBV_29wjpKzu2t0HqCJUr?usp=sharing

Some things to consider:
If you are on chapter 8, I recommend having an extra save file as if you are able to proceed to chapter 8x, it will be pretty hard to beat. If you don’t want to go through this, you need to kill Justin (the sage one).

I’m assuming this is an FE8 hack, but you might want to include that info in the description. Either way, good job, I’m looking forward to trying this.

EDIT: Tried patching it, and this is an FE 8 hack.

Hey! I can’t seem to post screenshots atm yet because I assume my account is too young but I will definitely post them when I get the chance too.

Hey! Thanks for reminding me about it! I changed the post to remind everyone. I hope you enjoy the hack! 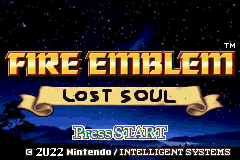 I admit, I have only completed three chapters so far, but I figured I’d drop some feedback here and now before I forget, since there are a few thing that stuck out to me even this early on.

That all being said, I like the funny PRF weapons, and I think with polish it can be a perfectly fun hack. Still, it feels largely like a beta (which, to be fair, it’s basically labeled as such), and it’ll need that polish to reach that level.

I’m just going to inform you that you can’t have a link to the download of a original fe8 Rom in you download guide. I would recommend removing it as fast as possible

Alright, I’ll keep everything in mind. Thank you!

Oh I didn’t know about that, I’ll remove it right now.

I’ve played some an am overall enjoying. Some critiques though:

Hey, I am glad you are enjoying the ROM! I didn’t know about the show heal amount patch until you told me so I’m planning on adding it later. For chapter 8x, I realized that it is pretty much impossible at the protagonist’s current level so I plan on changing up the chapter in another update. I am in the process of updating all the descriptions for everything.

I streamed this the other day in my server (not going to post any critique about that right now), but this is largely a pointless claim. You used multiple different variations of the same class (like using two different fighter or mage sprites and saying they’re different classes when they have the exact same bases and weapon levels).

Playing some more (savescummed hard for 8x, but lack of luck means foes can crit hard, and flat out one could kill me from full hp without a crit. Had to roll for one of two 96% misses.)

Hey, I didn’t mean to claim the classes as unique to each other but I get what you mean and I am sorry if I misinformed you. I wanted to have each character have their own class that is unobtainable through other characters and I guess my wording does sound like I have 100+ individually unique classes. I was planning on giving each individual class stats of their own but I seem to forgot about it and I am working on it atm. I will have an update to the patch where the classes will have their own individual stats. Again I am sorry for the misunderstanding.

I may have come off harsher than intended, I was basically saying that despite the claim this seems wholely inaccurate. No need to apologize, just something you should probably clarify (or even consider changing given the differences are cosmetic at best).

Will say I’m having a lot of fun even if there’s some rough parts to this!

Worth noting, summons from other classes do seem to work perfectly fine.

Hey, Thanks for telling me all these issues. I am currently working on an update for the romhack and I will try to resolve all these issues by the next update. I want to thank you for taking your time to test the rom.

Okay that was scary. Why he have to remove it and why fast as he can?