Check out this Puzzle Robo map design, only full length and spread out into a legit map.

edit: Discourse cuts off half of the montage and only shows it as an image preview unless you click on it.

Chp. 21 felt like filler. Bunch of weak-ish unpromoted enemies, a huge map, and some weird events. I don’t know how it would have went without the stocked convoy and strong, trained units, though. 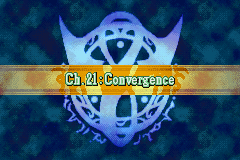 I think someone pointed it out already, but shhhh[quote=“Zane, post:66, topic:4295”]
Chp. 21 felt like filler. Bunch of weak-ish prepromote enemies, a huge map, and some weird events. I don’t know how it would have went without the stocked convoy and strong, trained units, though.
[/quote]

Guess what we’ll have today, too.

Anyway, sorry for the wait. Been consumed to hell and back by the Damn Train, and irl responsibilities. Time for me to post.

Hell, if I had played the chapter I would’ve changed the weather graphics priorities (Guess who has a thread for that?)

Snow + fog is such a cruel move. I hope murdering the boss felt like it was worth the trouble.

Not pictured: me reeing hard at full convoy, forcing me to have benched peeps to hold onto the weaker, useless stuff.

Hey, man, I tried to lighten the load. I sold, like, ten or so low-use weapons back in chapter whatever!

She explains how her family is dead, she’s holding the not-Fire-Emblem, and that being vaguely related to someone puts her next-in-line for the throne.

(Thelma’s bizarre debut/existence in general, combined with Rydell being a good guy, only solidifies my suspicions that there was some story arc centred around Megelar that was ultimately aborted)

Word on the street is that being part of the annoying “playable Anna” trend is exactly why the jury found her guilty of being unable to ｓｌｉｄｅ in the first place.

Word on the street is that being part of the annoying “playable Anna” trend is exactly why the jury found her guilty of being unable to ｓｌｉｄｅ in the first place.

Well I guess she won’t be clearing Frost Man’s stage any time soon.

Boy chapter 23 was more nothing. 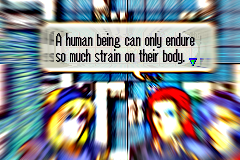 Another FE7 story with Four Heavenly Emperors and a final chapter title drop. This bodes well.

Ch23 is, in my opinion, the textbook example of gigantic Requiem maps (edit: actually, no; that would be the fog of war rout map with Laraya, but this is still an honourable mention). Just so, so much nothing with everything that might’ve been interesting (the switches and the final fight with Legato) tucked behind it, including the only non-recruitable switch-guardian being pretty much acknowledged by the game to have no purpose at all. I believe that officially, Manfred is another dangerous person who was locked in the prison just like Shel, but either the game doesn’t tell us this or it’s locked behind a boss quote/one of the recruitment convos of the other two stooges.

Also, our enemies are no longer humans devoid of morals and character, but humans who are being manipulated. I get the allure of having a special type of enemy that comes out during the endgame (I guess these are Shel’s version of the E.Egardia units), but in Fire Emblem, that means it’s time to pull the dragons/monsters/etc out, not just re-brand the morphs you’ve been using all game. Dang; now I’m imagining Shel turning the hollows and himself into Duma-esq monsters for the final chapter. That actually sounds cool.

and speaking of monsters, u killed benchmeat’s mom and whateverth-cousin-twice-removed’s buddy i’m gonna have ur head if they’re the key to beating the game and u doomed us to playing through the whole thing again

Was someone recruitable because I’m not doing that shit again

The assаssin and the sniper are recruited by Thelma and Linda, respectively. Don’t they just scream “totally necessary recruitable”? 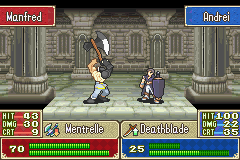 Half man, half Fred.

Joking aside, it’s good to see that we might just finish this one.

There’s a chance I’m misremembering and they’re just talk convos, but I’m pretty sure I remember them being useable in the final chapter.

(to be clear, do not go back to get them they’re literally useless and it’s not worth playing that chapter again)

Smilies took too long so I’m finishing this

I took a lot more pictures but batch upload keeps fucking up the order and I’m not doing this one by one so I’m just gonna reduce how many I stick in this post.

And that’s Requiem! Took a bit but we finally managed to finish one of these damn things. 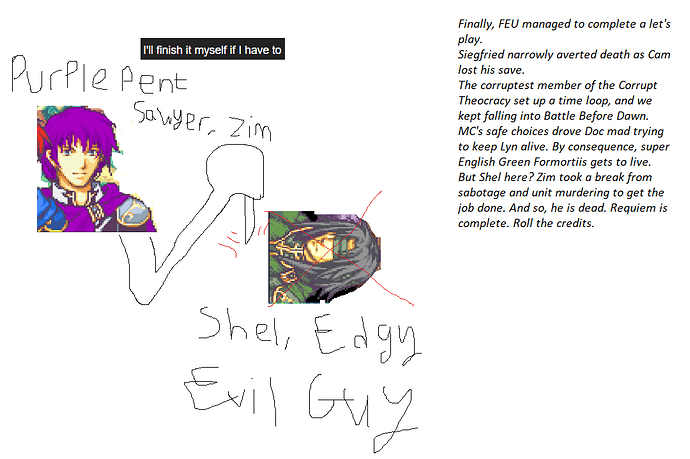