A few weeks ago I released this project of mine on SF and Reddit, and was told that I should publicize it here as well. I only ever really lurked in the documentation parts of this site, I had no idea it had an entire projects section as well!

This is a 19 chapter completed FE8 story and gameplay hack. Hundreds of years ago, Humans competed for survival with magically gifted beings known as ‘Fae’. Over time, a breed of ‘Half-Bloods’ emerged, descended from parents of each race. The Half-Bloods chose to ally themselves with the weaker Humans, and the Fae were destroyed. The Half-Bloods then turned on the humans, using the powers of their Fae blood to subjugate and enslave their magically-inert cousins.

A little over a hundred years have passed since the subjugation. Our main characters are two Half-Bloods: Lord Cassius Malberry and his sister, Fordra. Hoping to find the cure for a horrible disease, they hunt for an ancient Fae tome…

The game makes use of the FE8 skill system and is meant to emphasize fast play while giving the player strategic flexibility. It also features supports, original (but badly spliced) mugs, some original music & numerous paired endings.

While the core game is finished, I am still actively working to fix bugs, improve the aesthetic presentation, & improve the game’s balance based on feedback. If anyone wishes to contribute mugs or other artistic assets to the project, please let me know, I’m more than open to help!

Otherwise, enjoy the game, and let me know if you find any bugs or have any feedback to give. All criticism is welcome.

imgur album with screenshots from the first 2 levels

Cool to see you around here (I’m TheUltimateChaos on SF).

Hack is pretty good and very hard on hard would be nice if u gave canto to rangers and gave them 8 move to match the other mounts and gave great knights at least 7 move cause 6 move sucks and shouldnt be out moved by an assassain lol.

Is Roy in this hack?

i finished this a while ago, seems this hack went under the radar but that’s likely because of the bad sprites. gameplay is solid (hard mode) except the final boss if i’m being honest. i don’t want to fight robin with awakening’s nosferatu as a boss, who teleports around, so i skipped that chapter and looked up the ending on youtube lol

Out of all the complete hacks this one is certainly among the most unrecognised.
My opinion of the hack after playing a hell of a lot is that the hack really gives the player choices in its map design and items given to the player, and the story is original and solid. It might be because this was my first played hack, but the sprites seemed alright to me.

Word of advice though, hard version is absolutely brutal and I had to warp skip and rig crits to push my way past.
Both enemies and player units have very high accuracy and deal huge damage, making positioning and player phase absolutely critical. I found no unit in the late game that could tank more than about 3 hits.

i forgot about the second last boss’s hp draining weapon and had to crit rig for a good 20 tries on the final turn because of it. it came down to the last turn because i’m a completionist and wanted those sweet sweet treasure chests that iirc didn’t even have that good of loot in it #worth

this is a good hack , thank for the game , thank for the feel, really glad took my time to play this , just need to hold a few chapter of bad sprites then you good good job

I’m really glad to see that people are still enjoying this almost 2 years later! Thanks so much to everyone who’s still playing and sending feedback. This might not be the most well-known hack, but it still feels surreal to have made something which many other people around the world are having fun with to this day.

Recent posts here & on SF reminded me of a few changes I wanted to make, and owing to the COVID situation, I had some extra time to implement them. Patch 1.1.3 is now up in the google drive folder - just fixed a few long-standing minor bugs, and also gave Knight and Great Knight Felix slightly less offensive palettes.

Great news, this is actually my favorite FE hack! Tough as nails and you can’t afford to lose even a single unit, but also very rewarding and has some really memorable moments gameplay and story-wise.

Is there going to be more updates coming, or is this the final one?

No specific updates planned, but I’ll still be keeping an eye out for bugs & feedback and fixing things as needed.

I’ve also had some fleeting ideas for supports / paired endings which weren’t in the original release. I might get around to writing them out at some point, we’ll see…

Hey, I was curious about this game. Is 1.3 the current version? If it is, I’m working on downloading both Easy and Hard mode now. I’m curious about the characters in it.

Well, I got to Chapter 15 of the game and this is my favorite character so far. 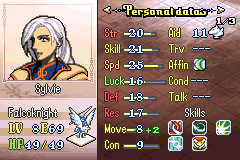