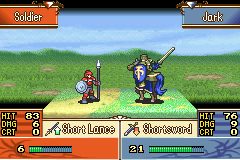 This is Fire Emblem: Cult of Yarudr, a GBA hack I’ve been working on since 2018. Does this mean it’s near completion?

At least we can take RNG dodge without exchanging blows like FE 11 and 12.

Dang, I had a idea for something close to the name :[

Looking quite schmexy i do gotta say

Is that my name in the credits??? You love to see it.

well I used one and only one item icon from someone else, so there you are

How far along is this hack?

I’m a university student, so not much happens during term periods. They get reeeeally busy. After April I want to work on getting the first playable public patch out. Because of university work there’s just going to be a lot of times when this isn’t being worked on, but it’s not dead.

you and me both buddy, keep the spirits up aight!!

Which would you people prefer for the release of the first 6 chapters? (It’s not ready yet regardless)

Can you please make a fixed growth version?

Is there a link? I want to try it please

Not yet. I’m pretty busy this time of year.