So a few weeks back I downloaded FEBuilder to finally get on my dream project. It’s honestly been amazing so far, the program is truly a marvel of hacking ingenuity. But unfortunately it’s not helped me figure out a very big problem I’ve come across.

Certain ways of fighting seems to freeze the game for about 10-15 seconds, then force it back to the main menu. But it’s veeeery specific! It seems to involve custom animations each time, but all of them were downloaded from the big repository here on FEU, and all of them seem quite complete when I review the animations. Basically certain things work while others don’t.

Let me clarify; in the first map, I have it set so that you’re taught the weapon triangle by moving at three enemies with three allies, all of whom would fight at an advantage against said enemies. You have a custom female fighter that attacks a custom soldier in melee with an axe. That works fine without crashing. Then a custom lord against a regular male fighter in melee. That works fine too. Then lastly, you have a custom soldier that attacks a regular mercenary with a javelin. That also works. Now, without putting ANY sort of coding in to force the player to attack in these ways, NOTHING ELSE WORKS. If you change up those configurations at all, it leads to the crash I mentioned above. Even something as small as using your soldier to attack the mercenary in melee instead of at range causes the crash. My thought there was just, “okay weird, but I guess I can try to solve it later. I’ll just test the rest of the maps now and debug after.” WRONG! Because the boss of this chapter is a custom knight sprite, and the crash happens against him if ANYONE tries to battle him.

So, uh… Any ideas? I’m pretty new to hacking and while the tool is simple to use, I might have overlooked something basic due to inexperience.

Hello and welcome! Glad to hear you’re having a good time hacking. Could you by chance post a screen shot of the event that you’re mentioning? That would help diagnose the problem. Also, a clarifying question: You said you have been able to get the animations to work themselves in individual cases without crashing? As in, you don’t think the scripting for the animations is broken?

Here’s the report file. I’m really impressed that feature exists, it’s crazy how forward-thinking that is. My hat is off to the devs of FEBuilder. You guys are geniuses.

Included with the file is also the following screenshot at the other user’s request, which shows the exact moment the game freezes and one of the class combinations/attack distances you can use to replicate my crash issue.

Hello and welcome! Glad to hear you’re having a good time hacking. Could you by chance post a screen shot of the event that you’re mentioning? That would help diagnose the problem. Also, a clarifying question: You said you have been able to get the animations to work themselves in individual cases without crashing? As in, you don’t think the scripting for the animations is broken? 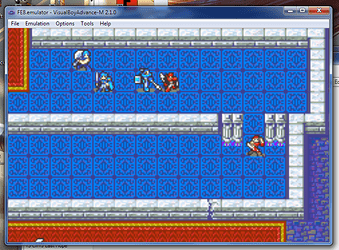 Yes, I’ve been able to get things to work if I were to follow the tutorial messages (which as far as I’m aware is pure coincidence). For example, if instead of attacking the solder with the soldier, I had attacked the soldier with the fighter, no freeze and crash would have occurred. The animations are capable of working correctly but not when squaring off against certain enemies, it seems.

I think he meant a screenshot of the event in the event editor
Either way, the report should have everything needed

I figured, but the thing is; an event isn’t the cause of the crash (I don’t think) because no event is being run when it happens. It’s during the player’s turn and only seems to involve specific situations during battle. I just snapped the nearest relevant situation to add some clarity.

Correcting this one byte will work correctly.

Usually, the routine is as follows.

Perhaps SkillSystem is reworking this part.
Therefore, SkillSystems was broken because I tried to rewrite this part additionally.
So I think it’s frozen.

Attach the version of the fix that fixes the problem.

Oh my gosh, you are a genius and a saint! Thank you so very much for your help! You’ve honestly put me into a state of awe with how quickly you’ve helped me solve a problem that almost made me quit on this project. Thank you a thousand times over.

I can confirm that the fix is working 100% and I’ve finally been able to move on through the first map without any crashes!