Is it possible to fix overwritten data?

Long story short, I was suppose to repoint my spell association module and I didn’t due to misinformation so I ended up overwriting things in my ROM. Now whenever I try to create new custom weapons and assigning spell animations via nightmare, my game either freezes up and/or black patches start appearing on my maps where there was none previously.

What I did do so far is:

I can’t revert to my backups as I was repointing things nearly a year ago when I first started my hack so I don’t have saves that old to revert to.

Is there a way to fix my problem or am I screwed and have to start over?

Maybe there still some pointers screwed up. (if you don’t know your repointed offset) I would take the vanilla FE7 rom and do a search for the vanilla spell association offset. Note the offset and go to them in your hacked rom and type the vanilla offset of it in. That way you won’t miss one in your hacked rom.
If that’s not helping, you could compare your rom with the vanilla one with HxD and looking for fishy data.

That is what I attempted to do. I compared a vanilla FE7 to my ROM and fixed the original location of the spell association. Assuming nightmare writes data to the now repointed location, which should be correct, I’m not sure what my move should be. Does nightmare only write data to one location when creating custom weapons or is it more than one location? Is there anyway I can find these locations if that were the case?

Open the module in a text editor or hex editor. Nightmare edits the rom at the offset you’ll find there.

I managed to solve the black patches issue, turns out the area immediately after the default spell association location stores information for chapter data editor ( or at least I think so) so i just went about changing everything back via chapter data editor module. But one thing still remains, 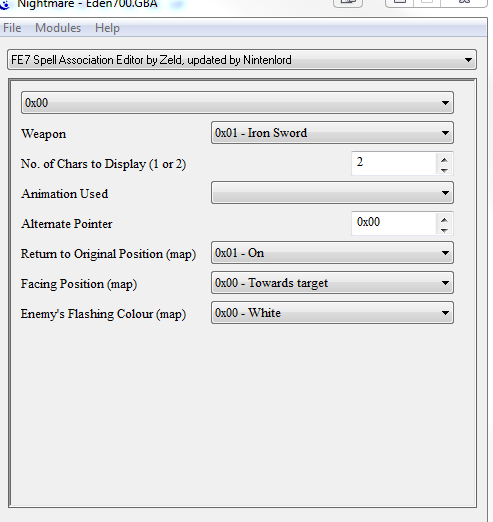 This image shows my spell association module while 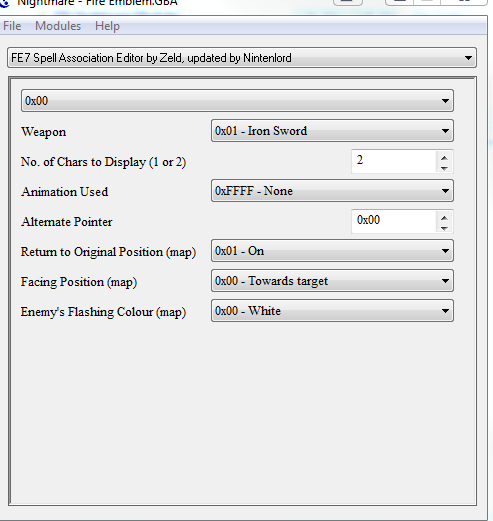 this image shows a normal spell association module from a fresh ROM, on mine if you notice the “animation used” box is blank, I noticed in the past that if this happens it means I still have something screwed up somewhere, any idea where I could look? Normally when scrolling through the weapon list in the spell association, for weapons that don’t use any animations, the box is defaulted to “None”. But in my case, it remains as blank until a weapon with a spell animation shows up. I hope this isn’t too confusing as it’s kind of hard to explain without showing.

Though, if I’m wrong about this blank box thing, please tell me because I am not sure if it is true or not.
I’m only asking this because I want to minimize errors down the road.

open the nightmare module in notepad

do this for both chapter data editor and spell animation editor

write down the offsets on the first line

open a hex editor to those offsets on both your ROM and a vanilla ROM. either with a diff tool or by inspection, make sure that your ROM matches the vanilla rom exactly

wouldn’t all the changes I made through nightmare over the duration of me working on my hack make sections of my ROM vastly different than a vanilla ROM?

sorry for so many questions, just wanted to make sure i was on the same page as you

if you’ve repointed, it shouldn’t matter that you’ve made edits

you’ll want this to be with the original module

the spell animation section is exactly the same as the vanilla.

as a side fyi, i repointed spell animation and not chapter data editor, would this be the cause of the blank boxes? i figured there was no need to repoint chapter data editor because I’m not adding additional chapters, though if I’m wrong please let me know.

but besides that, the blank boxes are still showing up

I’ve always have this blank boxes when I use the Spell Animation module, but it’s still working fine with me.

hmm that gives a better peace of mind, sephie. i hope my ROM will continue to work. if you dont mind me asking, have you been creating additional custom weapons and your ROM is still working?

Yeah, I’ve expanded my item table and have currenty 170 weapons with a lot of magic weapons in the expanded area.

Ah okay, that is good to hear, hopefully mine will be like that down the road. Thanks!