Hi all, I’ve recently been learning how to use FEBuilder and I’m trying to figure out how I would go about using the mauthe doog walking sound in FE7. I remember Nintenlord had a patch and nightmare module that helps you change the walking sounds of the classes and shadowofchaos figured out how to add the mauthedoog sounds and using them in FE7.

I was able to add the mauthe doog walking sounds into FE7, but that was a long time ago and I can’t for the life of me remember how I did it.

So far I used FEBuilder to import the mauthe doog sounds into FE7 and patched the movement sound installer, but I don’t know where to go from here. Thank you in advance for taking the time to help.

You would need to import the SFX of the walking sound to FE7, fiddle with the priority, and assign the noise to the class in question. I don’t know much else about it, but I didn’t need to import a walking SFX in specific before, so that’s how I would approach it.

Yeah so far I used FEBuilder to import the sfx from FE8 into FE7 at the same location location in the song table. For example for the Mauthe Doog growl, it’s located at 032A in FE8, I’ve imported it to 032A in FE7 so that I can use the sfx for the battle animations.I’ve also changed the priority as well.

The only part I’m not sure how to go about is assigning the walking sfx to the class that I want to change.

There should be a editor for it.

Yeah, it’s in FEBuilder. I’ve patched it in, but the issue is since the Mauthe Doog sound is not in FE7 originally. So it’s not listed in the walking sounds. 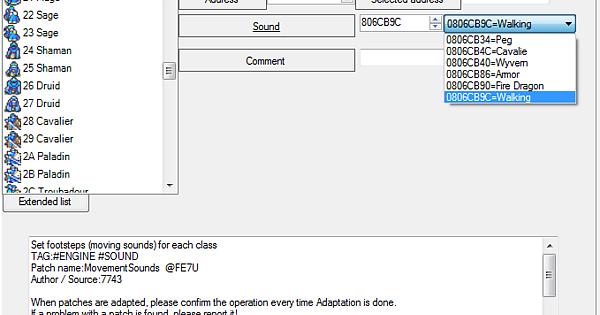 So that’s where I’m stuck. I don’t know how to add Mauth Doog to the droplist in order for FEBuilder to assign the sound to the class that I want to change. And I’ve also ran into another issue where when installing this patch if I were to change say Lyn’s sound to another, no sound plays when testing it. So I’m guessing I would have to repoint something for the sounds to play. But this one’s been added after using Nintenlord’s moevement sound patch. So I’m going to try to use a clean rom to test it out.

Go to the sound table, there you look up what is the offset where you imported the sound, write the offset there, it should work

This is what I see when I take a look at where I imported the Mauthe Doog walking sound in the sound table. 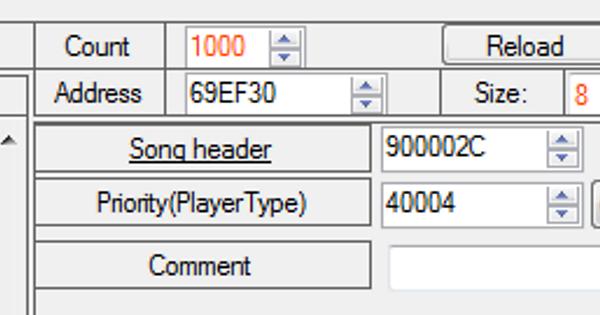 In conclusion, ASM is required.
The moving sound is specified in the ASM routine.
The routine of moving sound used in vanilla is registered in combobox.
If you want to use anything else, you must make it yourself.
Look at existing ASM routines and make your own.

Ah ok. Thank you for letting me know.