I’ve began just today this patch and I was wondering, is there a promotional item for thieves ?

Is possible to make the rogues doesn’t need the lockpicks in the hack? Like Fire Emblem The Sacred Stones 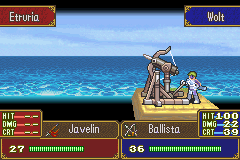 Hey everyone, it’s me again. Apologies if it seems that I have been silent, as Ember has not been publicly updated in almost a month. However, do know that it is because me, my partners, and testers have been working and polishing up a final major update to this hack. It aims to add more to the hack than any previous build, including added playable units to the main campaign, custom supports written by @KrashBoomBang (who I trust more than anyone else when it comes to capturing the tone and feel of FE6’s writing), and a whole new difficulty level contained within a separate patch that will be added to the Dropbox when the time comes. I look forward to releasing this update very soon and am ecstatic to see where things go next after the future release!

For the time being, feel free to observe one of the major new additions to the hack, specifically for our good man Douglas: https://www.youtube.com/watch?v=070gnRNUV-I

As a bonus, here’s one of the new playables as well, complete with his own dialogue and support conversations: https://www.youtube.com/watch?v=SQtkFm7xyxc

That is indeed normal, it’s a side effect of using different archer animations since the palette order is different, so it looks like a mess when using the vanilla ballista animations.

I’ll just say that is cute. I think it will be intriguing nonetheless.

Are the new playable units Guiniviere and Gale?

For now I think its best left up to your imagination, as I have already spoiled one of them.

Mind if I ask why you chose Lowen over someone like Rebecca? From what I remember Lowen doesn’t really have much connection to Roy’s army besides being from Pherae and being a knight, meanwhile Rebecca was Roy’s wet nurse, is Wolt’s mother and also is of Pherae, I think she’d be a cooler addition than just another Cavalier who happens to be from Pherae

Well in previous versions of Ember we only had two Great Knights available to the player, so having three of them compared to the game’s four Paladins rounds out the mounts a little more. We felt Lowen’s stat spread in FE7 complemented the GK class best and decided on him being the “returning FE7 character.” The writing portion came after. I can understand your Rebecca argument though.

Tbf, I think it’s fair to assume a character like Rebecca might have settled down after everything in Fe7, as opposed to Lowen, who likely stayed as a knight in Pherae, therefore he’d be more likely to still be fighting. Not that I don’t think Rebecca could be interesting, but the game isn’t really lacking in Sniper class units.

Rebecca - A Wildflower Rebecca returned to her father, then pledged service to House Pherae. She has formed a family, and yet she still serves Pherae well.
or
Lowen and Rebecca Rebecca and Lowen were wed and they became two of Eliwood's most trusted retainers. Their green-haired son inherited his father's chivalrous spirit, as well as his mother's smile and skill with a bow.

I am very much looking forward to what may come from this final update, whenever it comes out. I’ve always wanted to see one of these “Fe6 improvement hacks” go further than just revamping gameplay. I’m also looking forward to what Krash’s supports end up looking like, s he played a significant part in me deciding Fe6 was my favorite game in the series. However, will any old supports be getting revamped/changed (as in a good number of Wendy’s which are bladder than bland), or will it all be new supports without touching any existing ones.

I can see that, I just personally feel like Rebecca would be less likely to go than Lowen, as I feel like she’d leave the active fighting role, since she was birth Roy’s wet nurse and had a son of her own. That’s not to say she couldn’t/wouldn’t have gone, but that’s just how I see it, since she could serve Pherae even after putting away her bow. Plus, it’d make sense for Eliwood to keep some skilled soldiers with him, which is why I’m not fond of Lowen heading out, but that’s whatever.

That’s fair. I don’t necessarily feel the same, but this is your hack, and I’m enjoying it a lot as is. I hope that the final bits of this hack go well for you.

P.S. I’m taking about the point on existing supports. I completely agree with letting Krash work on his own thing.

The beginning of FE6 has Pherae basically defenseless since all the skilled knights went to Araphan to get Zephiel’d, Lowen’s ending has him being known as a famed knight on par or even surpassing Marcus, I believe he would have been there to get Zephiel’d as horrible and sad as that is ;w;.

It’s tough because if Lowen was with Eliwood the whole time then why didn’t he help out in chapter 1? and if he wasn’t then he was most likely sent to Araphan along with the rest of Pherae’s Knights which means he’s not very luckily to be able to help.

I think with Rebecca you could assume she hung up her bow and still served House Pherae, then with some write around you could think of a reason why she didn’t fight in chapter 1 but is now coming to aid in the later chapters, if she wasn’t sent to Araphan as well in which case, F

Yeah, my personal Headcannon is that Lowen got sent to Araphen and got Zephiel’d (remind me to make that an actual noun) but it’s possible he could’ve survived, at which point I think there are two options of you want to make him playable. Either have him have just escaped death and join the party during Chapter 3 (like, he’s surrounded by enemy units and the player has to rush to save and recruit him) or he’s managed to get away with only being injured, having to be healed, and joining the party mid game after recovering.

Personally, I would just try to keep FE7 out of FE6 as much as possible, especially when considering the Lycians from FE7 since iirc most if not all of them would be dead:
Pherae’s Knights are killed in FE7, then they get Zephiel’d (Harken, Isadora, Lowen, Rebecca)
Ostia’s Knights get Zephiel’d (Wil, Oswin, Matthew, Serra)
and the Orphanage run by Lucius (and presumably Raven) gets destroyed and those there are killed.