Every MIDI imported has some fatal sound error. Fixes?

I am trying to import midis to have music variety in my own personal playthroughs of roms and rom hacks.

However, nearly every midi I import has some sort of jankiness. This could be a drastic change in instruments, the song jumping to random parts and speeding up, and at one point I had one song just play scratching noises. Only one has worked completely fine and I have imported +5 different songs.

When importing these songs into anvil studio they ALL sound completely fine. Something is happening when transferring to febuilder/sappy. I believe I set the cues correctly so they should loop fine. I even tried importing one song directly from another GBA rom, but no luck.

What are possible causes for this? Do I need to upload videos of the songs to show the errors? Is there anything I need to post on my febuilder song tables to get assistance? Are there any simple fixes?

Any help would be appreciated. Sorry if I posted this somewhere wrong, it is my first time here.

Midis won’t work very well unless they are prepared using the fegba instrumentation.

If you aren’t already using nimap2, I recommend you do.

I think it is easiest to download .s files from the repo and insert those. Midi you will have to prepare yourself and may have mixed results.

Import from another gba game also works pretty well in my experience importing the FRLG tracks. The only thing I had to do was change the drum track for every song I imported to a vanilla fe8 drum track.

Doesn’t importing from another GBA game take up tons of space because it also copies the instruments? I heard that’s why Deity Device had to be split into three parts.

You ask a question without attaching any data?

When you ask a question, you must attach data that can reproduce it, or you will burden the respondent.
And you won’t be able to get an accurate answer very easily either.
It will only be a mutual loss.

Doesn’t importing from another GBA game take up tons of space because it also copies the instruments? I heard that’s why Deity Device had to be split into three parts.

Graphics and sound use up the most space. Using up the 16+ mb of free space would be due to re-importing the same assets (eg. tweaking the animations and re-importing them) or by having a huge amount of assets. I’d estimate that you can fit at least 100 custom animations and 100 songs imported this way. But you’d only fit 1 song that is purely .wav, I think.

Since wav also has m4a hq mixer DPCM compression, you can import quite a few if you are creative.
In fact, Kaitou was able to implement 17 vocal songs.
However, we are struggling with the lack of space for that…
Roughly 8 MB of space was taken up by these songs, so it was necessary to delete unnecessary program space and even libc.
Assuming a 1-minute song recorded at 8000 hz minimum sound quality, it wastes 800 kb uncompressed, or about 300-400 kb if compressed.

Import another game song is also not recommended as it wastes quite a bit of space.
Depending on its source, this one will also waste space in the 100kb range.
You should probably be prepared to waste about 100-300kb per song.

The best thing to do is to reproduce the music in NIMAP.
Since s file is only sheet music, it saves much more space than the above method.
With s file, one song would be about 2-4kb.

Still, if you record 1000 songs like Kaitou, it will waste about 2MB of space…

I used nimap and one of the songs imported was a .s file, the rest were midis. The only one that worked was a midi not designed for the gba soundfont.

When you ask for data, you must specify what data needs to be shown, or you will burden the OP.

I clearly said in the post that I was new to this and I didn’t know what I needed to attach… and to tell me if I needed anything specific.

If you’re not sure, it’s a good idea to attach all the data.
The more information, the better.
But remember not to attach the gba ROM.

I think 7743 is expressing irritation due to how common it is that new users immediately make a new thread with verbal details instead of hitting up the FEBuilderGBA thread with an attached report7z. Honestly there should probably be some kind of sticky with “GO TO THESE THREADS FOR ENGINE/TOOL-SPECIFIC INFO/HELP”…

I’d be happy to add something near the top of the Getting Started thread.

I think the worst thing you can do is ask a question without disclosing the data.
When you ask a question, you should provide data as evidence that we can reproduce the phenomenon.
Because there is no way to answer the question because the data is not publicly available.
We have to assume all possibilities.
Especially if novices, we can even consider the possibility of operational errors or misunderstandings.
The more information you have, the better.
Because if you attach all the information, you will not forget to attach it.

In this case, it is possible that the midi is broken, that NIMAP has not been installed, that the wrong instrument is used, that there is a BEND and MOD, or that there is a disease such as auditory hallucination.
It is impossible to know which one applies without seeing the data.
The solutions are different.
For example, if NIMAP is installed incorrectly, it should be installed correctly, and if it is BEND and MOD, the correct course of action should be taken.
And in the case of auditory hallucinations, you should go to a doctor.
We do not know at this time which solution to proceed with or not.

I added this to the Getting Started thread: 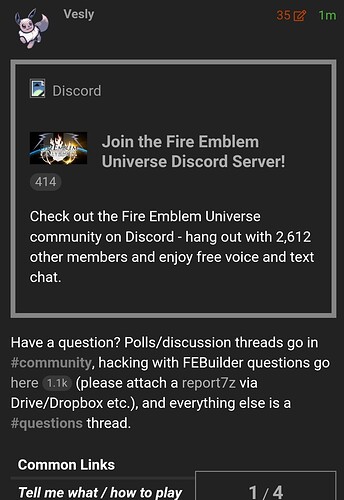 Is it possible to make viewing this topic (Getting Started) a prerequisite for Basic status?

Also I just realized OP is importing into romhacks, not into their own project.
In which case it’s probably an alignment or free space problem.
Either way, a report7z is the way to go