Hello everyone! I wanted to create this post to have a place to share updates and progress with the fire emblem community.

I am currently a few months deep into a new project combining features from fire emblem games and rogue-lite elements.

The main concept is a smaller fire emblem game with a story that spans over multiple runs. It will be challenging and will take many attempts with no chances to restart a level, only playing until death and starting over from the beginning. As you play some items, gold, units, and such will carry over to make progression easier.
Each run will be relatively quick, with a successful run to the end lasting roughly a couple hours and an average run lasting 1 hour or less.
Each run will consist of 10 Chapters with 6 levels in each chapter. The first 5 levels are selected by the user with the 6th being the boss fight. Levels 1-5 will be quick while the boss fights will be more around the size of a normal Fire Emblem chapter.
The main story will progress as you complete different requirements throughout multiple runs.
The gameplay itself will be similar to a regular srpg game with influence from gba era fire emblem and with streamlined unit building and leveling.

I currently still can’t post images so instead here’s a quick update on the development progress!

notes:
Currently there is an existing alpha build but it’s very messy and was just meant to show off the base game to friends. The goal is to have a public build for the game by the end of this month, but I’ll just release what I have for everyone at the end of April regardless

I love rogue- lite games. This is definitely one I will keep my eye on

Hi everyone! I finally have the ability to post images, so I wanted to give another update with some images attached to help provide some context to some of the features mentioned earlier.

Firstly, for a code update things are going well and I’m still working on the tasks mentioned last week. This week I plan to take a break from the game code and work on helping with updating the art git repo so I likely won’t have anything new to share for another 2 weeks or so. 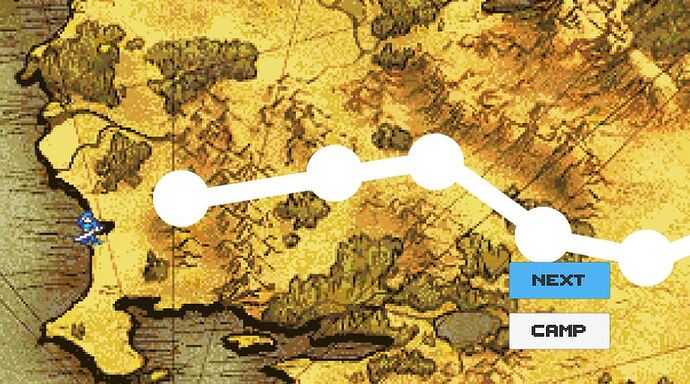 map919×512 127 KB
Each node is a chapter that will consist of 6 smaller levels.
Next starts the next chapter, and Camp will take player to camp scene. 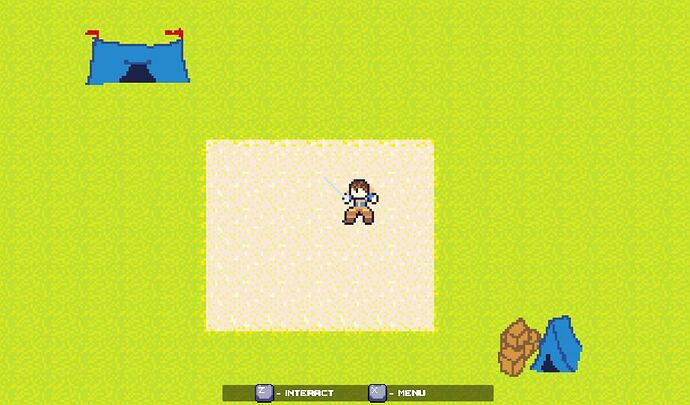 CampScene923×543 64.8 KB
Very bare bones right now, camp will be where player can interact with their units, manage inventories, and access a shop containing basic items. 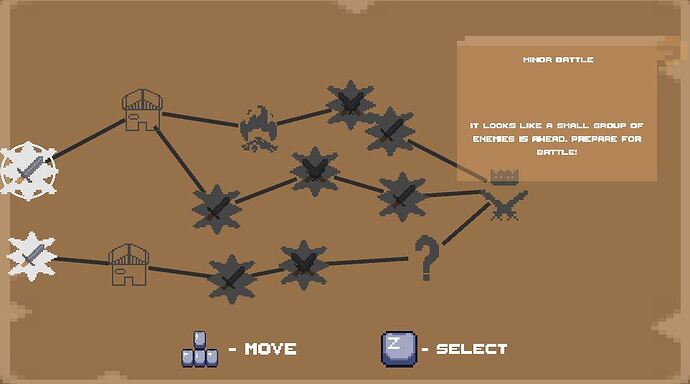 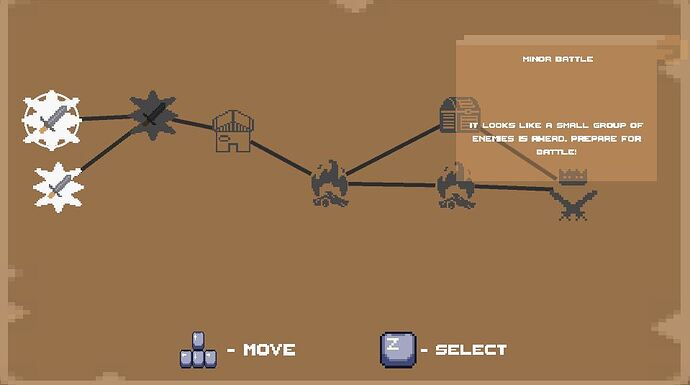 above are some examples of the random maps that are generated per chapter. They consist (currently) of 4 randomly generated nodes and 2 set nodes. The first node will always be an easy battle (minor battle) and the last node will always be a boss fight.
Current node types are:
Minor Battle - an short easy battle. Much shorter than a normal fe chapter.
Major Battle - a longer more difficult battle. about the size of an early fe chapter
Boss - a scripted boss battle. These will very but typically be the size of a later game fe chapter.
Shop - opens a shop with better weapons and items not available at generic shops.
Rest Site - will take you to a camp site, the same one you can access at the start of each chapter.
Treasure - either receive a random treasure (gold, items, etc) or loads a special map where player will battle for a better treasure (more gold, better items, etc).
Mystery - Will randomly act as any of the other nodes. 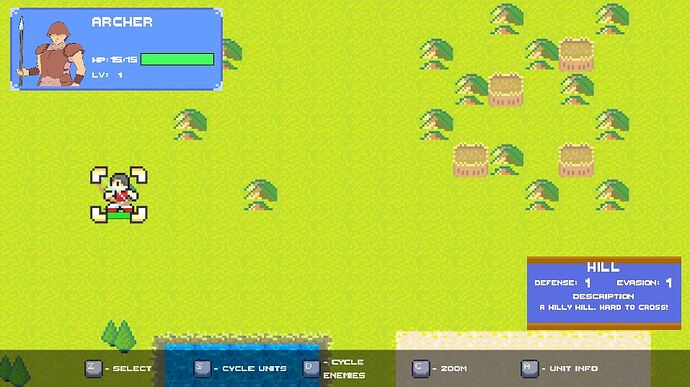 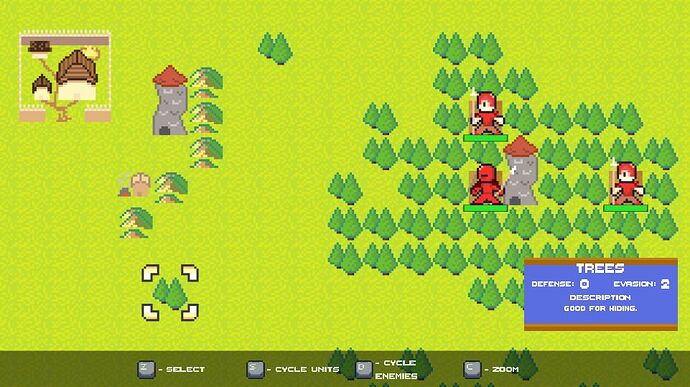 Above are some examples of randomly generated maps for battles.

I have several class animations already made by myself and in the current build of the game, but none of them are very well done at the moment. I’ve also considered changing the art style to be more like the 2nd example to be able to get more of a cuter chibi look like wargrove as opposed to traditional fire emblem sprite art.

This is really similar to an idea I (extremely briefly) started in Unity two years ago, really cool to see! I very much look forward to reading more about this project going forward

Hi All! I wanted to just give a quick update as to the current state of the project.

I definitely missed that end of april deadline I mentioned earlier as there wasn’t enough game done to comfortably share a build publicly. Due to work and just life in general development has slowed down considerably compared to the previous few months.

I’ve just tonight completed work on the base recruitment system and have decided to shift my focus to a quantity of work over quality. I plan to focus on getting the bare essentials I believe the game needs to properly express my vision and then worry about cleanup later.

because of this the main 3 focuses in the coming weeks are:

the current goal is to share a public build around the end of May as well as post more regular updates in this thread.
Thank you to those still following this project!

Hi all, another short uninteresting update!

I’ve gotten a lot of work done on the codebase and have shifted to a big art overhaul.
Unfortunately I’m not very good at art so it should all still be considered stand in art, but will be better than what is currently in the game.

After the art is done I wanted to rework how the random maps are generated but I plan to release a play test for everyone consisting of 3 total chapters at the end of this month still.

Nothing overly interesting to share yet, but I wanted to keep everyone updated and assured that I’m still working on the project.

Hi again everyone!
I wanted to give a short and quick update about the current plan and trajectory of the project.

The codebase has become pretty unwieldy and hard to work with, mostly due to me not accounting for a lot of things as I was building the engine. Because of that I’m planning a total rewrite, meaning updates after this will likely be very slow and sparse.

I plan to button up what I have currently and release on Sunday a sort of proof of concept to showcase the work I’ve gotten so far and the basic skeleton of how the game will play so I hope everyone will enjoy the buggy mess.

Cool good luck on the development.

Hi everyone, pretty late but I got everything set up finally.

I have edited the original post in this thread but here’s the itch io link here too:

Play in your browser

It’s playable in browser but this will likely be even buggier than the windows build.
It’s pretty buggy as is, but represents a solid skeleton for what is planned for the future.

There is no real balancing or anything currently and is more of a proof of concept or prototype.

As I said in previous updates, I will now be reworking the engine the game runs on to hopefully fix a lot of the issues I’ve been having but will also lead to slow updates from here.

Thanks to everyone who has kept up with the project so far!

Jokes aside, pressing the X button (to go back) while on the units menu softlocks the game.

Can just go straight to starting the battle if you want to see the rest of the game, I probably won’t be doing any bugfixes for the prototype since I’m remaking the engine.

Hi everyone, I wanted to give a quick update about my current progress with development.

The first thing I wanted to focus on was changing how the maps are generated.
The first solution I had that’s present in the demo is to break the map into 9 equal sized chunks to create a 3x3 grid and randomize each chunk.
This worked decently and I was always able to make sure there were good areas for the enemies and players to spawn on and reach each other.
The big problems with it though were that it wasn’t truly random since I could only make so many chunks, and it would also be very difficult to have continuity on the map so it was often obvious when chunks ended and another began.

The new solution I’ve implemented is using a form of cellular automation. Essentially I take a tilemap with some existing tiles (or an empty tilemap) and fill in the blanks randomly with grass or water tiles. I then run some clean up that changes each tile depending on set rules based on their neighbors a set number of times. Lastly we place different foliage (hills, trees, etc) where we have grass tiles.

This allows me to both generate completely randomized maps and also maps very similar to an input I give it.

It can definitely be improved and have more tiles added to it for more variation, but I like the results so far.

Hi everyone!
Back again with another update. The main thing I have to show that I’ve been working on for a bit now is that I’ve decided to change up the visuals for the game. I’ve changed to using 3d tiles with pixel art textures. I wanted to have some more interesting visuals and so I decided to try my hand at the hd pixel art meme that’s becoming more popular in indie games.

The last big update is that I was planning on changing up game play a bit. Essentially all of the story elements remain the same, but instead of slay the spire-like progression, I want to make it more of an rpg with rogue-lite elements.
The current idea I’m working on is open world exploration like shining force with fire emblem-like srpg battles. There will be a time limit beat the game with a failure having you restart at the beginning but with some meta progression.

The main reason I want to do this is that I feel the full rogue-lite game I was making only works with fully nameless/faceless randomized units and very careful tweaking to exactly how random all of the random generation is, and I decided that’s not the game I want to make.

The main things I want to focus on are interesting characters that actually have an affect on and matter to the story, as well as unit building (I like making op units).

Because of that the main features in this new iteration of the game are:

Once I make more progress I will make a bigger update here and also update the initial post in the thread.

Thanks for following everyone, feel free to leave your thoughts and opinions on this change