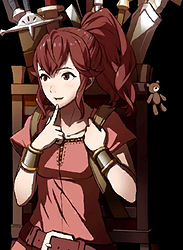 i submit jelik from the last promise 4

edit: slightly changed some of the shading

“You… Fire Emblem players… can you handle the weight… of a man who has Anna for a wife?”

When you gotta get into heroes one way or another

Okay, I got my first portrait ready. I will edit this post when Anna is done, but here is GBA style FE1 Jake. I hope no one already did this.

Your princess is in another castle.

Damn what’s next… is Anna going to be toad?

Yo get the fuck out my mind
kek.

i was thinking the natural conclusion someone besides me would make would be The Princess.

You’d be surprised how many people have said other things and on the other hand, you’re comparison is oddly accurate…

Well, glad I didn’t go with my original plan to make FE1 Jake and instead just made him a Soldier.

Oh, and I got lazy soooo, Anna is basically a General in Heroes right? (minus everything that makes a general a general besides axes lol) She had to get her start somewhere so Recruit Anna!

Don’t ask about the file name.

Alright I added my Anna portrait to my original post.

So a couple of questions…

What about characters from non-GBA games? I know applicable characters includes all mainline and spin-off characters, but won’t non-GBA characters put splicers and editors at a bit of a disadvantage, even gatekeeping some people? (Sorry if this is shittily worded, wasn’t sure how to get my point across.)

Instead of having the winner choose both male and female characters, why not have separate categories for each round? That way we have more winners, and there’s less pressure to make two high quality mugs to win a round. It might make the vote list a little longer, but I feel its a bit more fair to each contestant.

I think that SNES portraits aren’t that bad to change, but the hackbox would need to be provided.

Im assuming the contest is mostly, if not entirely, focused on GBA.

First time posting, decided to make a few edits for this
Here’s a few Pirate Jake portraits using both his FE7 and FE11/12 colors

Edit: Decided to make Pirate Anna as well just because

What about characters from non-GBA games? I know applicable characters includes all mainline and spin-off characters, but won’t non-GBA characters put splicers and editors at a bit of a disadvantage, even gatekeeping some people? (Sorry if this is shittily worded, wasn’t sure how to get my point across.)

Well, then you splice together a character that looks like the character mentioned.

If someone picks Edelgard, you can try to make a normal Edelgard, or even splice together an Edelgard-esque face onto existing armor; something like that. You just try your best.

It’s all for fun, and the points don’t matter.

why not have separate categories for each round

What does this mean?