At what point does a conversation actually have too much text for a text slot to handle?

Using FEBuilder I often get told a warning that there are too many lines of text. Whenever I view the text in-game however, it seems to run perfectly fine. Since I am hacking FE6 which is known for being unstable, I wanted to avoid doing things like extending the amount of text slots that are available to me whenever I can afford to. 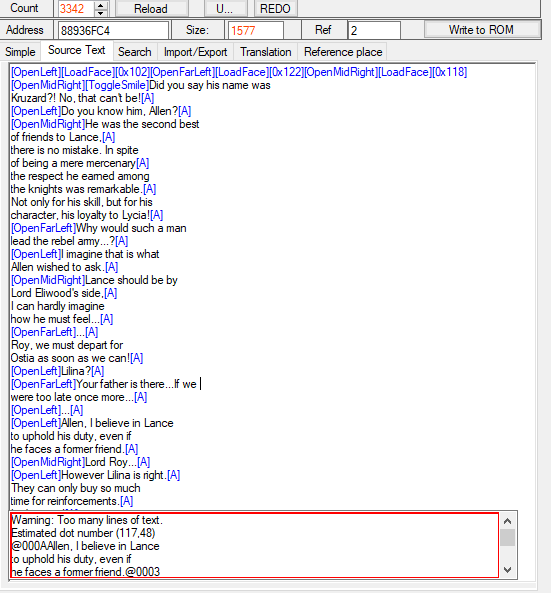 However, the editor itself gets pretty annoying, covering up the last sentences I can view and not allowing me to scroll down further. I’m assuming I can get around that with Notepad or something, but at what point is this warning worth taking seriously?

I mean that is three lines of text, so it would scroll past one line without anyone prssing A. can’t you just right click and hit ignore on the fault so it doesn’t pop up again?

Oh is that what that warning is about? If it’s just that thing then I guess it’s not a problem, I just have to get used to formatting these conversations more effectively…if there’s no issue with having lots of text in these, then I’m fine with what I’ve got to work with.

Generally speaking, unless you’re one of the cool guys with a three line text patch (I know they exist, I don’t remember who has them) you want to keep character dialogue limited to two lines. Something something, brevity is the soul of wit, and also it’s really annoying when someone is pressing A to speed up a text line and it skips the entire first or more lines of a character’s dialogue because the creator didn’t put an [A] break in the dialogue.

Also, if you do that cheating thing where you write run-on sentences and just use the [A] prompt every two lines, it becomes extremely awkward to read.

TL:DR, limit your dialogue to two lines of text per sentence. Trust me when I say it will force you to use more imaginative writing to condense thoughts into readable bite-sized sentences anyway, and it will be much less awkward to read.

So while the above responses had told me of another issue, it seems I have come to conflict with my original concern, which is the amount of text a text slot could hold. Or perhaps, how long a cutscene could go on.

A conversation that was originally the end event for Chapter 8, where Lilina speaks to Roy regarding her father, was one I changed completely to suit the context I’ve made for my FE6 hack. However, the scene finishes before all the text has played, and the last letter shown is not consistent with what was intended either.

This is the full video showing the conversation, the length mostly simply being there for the sake of giving you an idea of how long it’s going for. For the actual cut-off, just skip to near the end of it:

This is what it looks like in the text editor itself, or rather the second half of it because it’s lengthy enough to warrant twice the amount of window space: 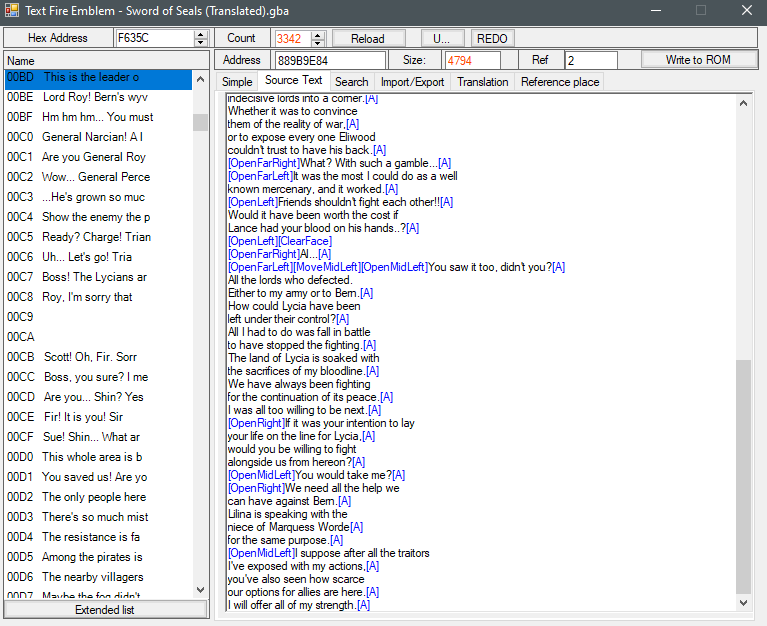 This is what it looks like in the event editor: 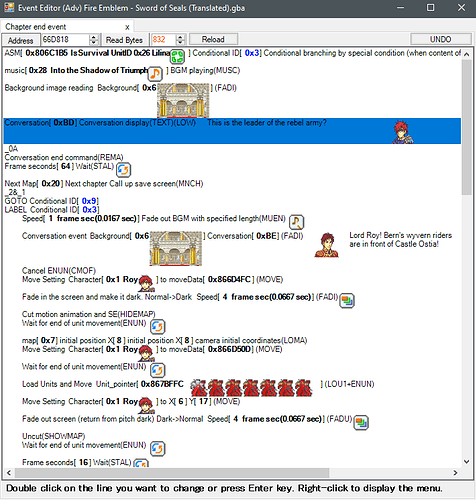 Is there something in the event editor that is causing this to cut short, or is it the actual limitation of there being too much text occupying the scene?

Pretty wild. There is an actual limit of text at which the game begins to break down, but I never encountered it, so no idea if that is your problem. You could just test splitting the convo up into two parts(the latter part using “moretext” as command to have a seemless transition.). Unlike the prologue-event, this one should be safe to edit.

I’ve fixed this specific issue simply condensing the conversation, but there will likely be times I need to display a longer conversation in the future.

How should I use a moretext command? Google doesn’t seem to be giving me information for it beyond the use of the Event Assembler before FEBuilder’s time. (I know very little regarding how to use FEBuilder, not being able to find many tutorials for it. I’m mostly just trying to figure out what to do from context.)

I don’t know the answer to this question, but I do know there are several long conversations in the gba games which are strung together via multiple conversation ID’s to prevent issues. Several hacks have used the method too. Someone else can probably give better specifics.

“MORETEXT” text to show-command in the eventeditor. It is easy to find through the “commands”-button when clicking on commands in events.