Hi, I’m trying to translate FE6 in Italian, and I’m using the English translation as a base. The problem is that in the Italian language we use a lot of accented letters (à è é ò ù) that aren’t present in the English translation’s fonts. I went to the font table in FEBuilder and tried to create my own letters (basically re-creating the ones in the later GBA games with official translations), but whenever I add them in a dialogue and I try to play the game only two hearts appear to replace the letter and when I go back to the edit text option the accented letter is replaced by a normal one. (Eg: i write à > I test the game > the in-game à is replaced by two hearts > I go back to editing the text > the à is now a normal a)

What can I do?

I think you need a customized Font Table, if no one gives you a better answer, DM me, I’ll help you.

Try @Mikey_Seregon, as he’s making a Spanish FE7 hack. He might have some familiarity with adding accented letters and may have a font table.

Note my liberal usage of ‘may.’ I’m not certain at all.

You can just replace fonts. ^,<,>,$,_,{ and } are unused except for inside the linkarena to my knowledge. In case you don’t mind working with a non-modified fontsystem of course.

Thanks! Now they finally work!

For the FE7 hack I replaced the font using Tile Layer Pro, but it was like 10 years ago and I barely remember how I did it. 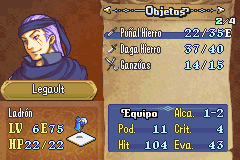 If you’re using FEBuilder, there’s a patch called “Draw UTF-8 Text”, it enables the UTF-8 unicode so you can write any character without replacing the existing ones.

You can just replace fonts. ^,<,>,$,_,{ and } are unused except for inside the linkarena to my knowledge. In case you don’t mind working with a non-modified fontsystem of course.

I recommend against this. It will make your life more difficult in the long run.

This happens because the à in your text file is not encoded to bytes in the same way that the hack expects them to be encoded. If you put them in the same places that the FE8 (U) font puts them, for example, then the text encoding should be Latin-1. (If you use a Japanese ROM, the built-in encoding is Shift-JIS, but this encoding only handles plain English letters and their fullwidth variants - not accented ones. So in this case you would need to replace some characters and keep track yourself.)

Nowadays, text editors commonly give you UTF-8 (it’s the best overall compromise between the things a text encoding should do, and it’s a de facto standard for the web now), which is why you would want to use the patch @Mikey_Seregon mentioned. Or you can fix the encoding in your editor, if it’s supported.

If you put the characters in some custom place in the font, then you’re on your own. The important thing to remember here is that the ROM works at a low level: the textual data is bytes, not characters, and those bytes are used directly to look up glyphs in the font table.

(If there’s any part of the above which you don’t understand, it’s a good idea to learn. This reference is from 2003, but it still (AFAICT) holds up pretty well for the basics.)