So I was going through one of my old files, and I found the stuff for something I had an idea since a while back, but I hit a roadblock since at the time I didn’t have any means to make it a reality. (And I was afraid to ask the community for help at the time on it.).

But that was then, and this is now.

Now, I do have tools, but I’d like to ask the community for help on this one because of what I have planned being something I don’t think I could do all on my own.

But here we are now, and so I’m going to lay down the proposal for my hack here:

The story takes place in an alternate universe version of the lands of Hoshido and Nohr (FE Fates-verse, but done in Sacred Stones engine with the help of FE Builder.). Chronologically speaking, it takes place after the route split with Corrin taking the Revelations path, but Corrin, nor anybody in their army, appears.

Well, there are two reasons. One, to prevent continuity issues. Two, and more importantly, it’s because the theme I had in mind for this hack’s playable characters was that they were all based on ‘generic’ units in one way or another (from the names of the playable characters being derived from one-off NPC bosses and the replacement units in Shadow Dragon, to memes like 3-13 Archer).

Our main protagonist (and Eirika equivalent, story-wise) is a Nohrian named Unil, who’s attacked in the prologue by a member of the Nohrian Army’s Criminal Investigation Division. (Or ACID for short.).

According to them, after Corrin’s defection, Garon has passed an edict that has all Nohrian citizens with Hoshidan blood in them being officially classified as traitors to Nohr, and thus to be treated accordingly.

Thus, Unil is forced to make an escape with only some of her own siblings, and thus, his unexpected journey to survive begins, with her, in true Fates fashion, reuniting with long-lost family, and in it’s Revelation-route style fashion, recruiting allies from both Hoshido and Nohr.

(Planned) Completion Date: TBD (This is still in the very early stages):

(Planned) Features:
Unique Support Convos and endings!
Custom Maps!
A Route Split! (Although more likely than not, we’re gonna focus on one route at a time.).
21 Chapters and a Gaiden (5x).
At least 33 Playable Characters!
Additional Classes! (Like Halberdier, Bow Fliers, etc.).
Custom Soundtrack!
Skills! (Like Personal Skills and whatnot).
A Customized World Map
Lots of Custom Animations!

What I Need Help With:
EDIT: After some consideration, I’ve decided to revise and better specify what I need help with the most currently, and why.

1.)Proofreaders: Always a nice must-have. I’d like to have people who can proofread what has been written so far for the hack and give me feedback so as to improve the quality of the writing.

3.) Composers/Sound Designers: I’d also like these kinds of people on board as soon as possible because developing a soundtrack can take months on its own. Thus, the sooner we start, the better.

We’ll start looking for Playtesters once something playable is done. There may be more types of people to add to this list as well as time goes on.

I apologize if some of these seem redundant, but I wanted to clearly seperate out what I wanted, and this is the result.

The more people we have, the better! Currently, there aren’t that many people on the hacking team, but we’re always recruiting so far for more!

Up-To Date Credits (Please Let Me Know if I Need to Add/Correct Something on Here):
-Assets used and/or adapted from:
TBA

Map Sprites:
[T2] Blade Lord Lyn with Weapons by IS, Hextator, shadowofchaos, Moocavo, Vilkalizer
(I’m going to have to get this all on a seperate doc.).

Patches:
‘Skill System’ by Circles
‘Unlimited supports but only one A support’ by Circles
‘16 tracks/12 sounds’ by Agro/Brendor
‘48Command_Hack’ by Hextator
‘Anti-Huffman’ by Hextator
‘Range Display Fix’ by StanH
‘Native Instrument Map’ by Alusq
‘Character Custom Animation’ by 7743
Item check and remove extra events, source: Kaito and 7743
Magic and Melee Menu fix by Tequila.
All new Events by 7743

I know that this hack sounds ambitious, especially for someone as new to it as I am… but I’m determined to make it one day a reality. Even if I can’t get everything I wanted (like a customized World Map), I still want to at least try and make something playable.

For anyone interested, please respond! Every bit of support helps!

(This post will also be updated as progress is made… if any is made, that is.).

Screenshots:
(Please forgive me if the quality is a bit shoddy; I’m still fairly new to this, and these are mainly just test shots of what I’m working on. These are not necessarily indicative of the final product. May be updated as time goes on to better reflect the hack.).
(Currently working on Acquiring new footage):
New Screenshot of Unil in Action! 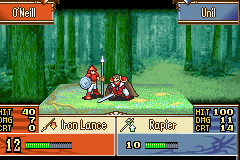 UPDATE 11-28-19: There is now a Discord Server for discussion the hack. Link here: https://discord.gg/gjVdzmK

Our main protagonist (and Eirika equivalent) is a Nohrian named Unil

Thus, Unil is forced to make an escape with only some of his own siblings

I haven’t played Fates so I can’t comment on how lore accurate this is, but one thing that jumped out at me was: I assumed Unil was a girl because you said they are Eirika-equivalent, but a few sentences later you refer to Unil with “his.” I’m sure you have it sorted in your planning, so this isn’t really a correction, but I was wondering what you meant by Eirika equivalent? Class/stats wise?

I meant role in the story-wise, actually. I should point that out more clearly in the post.
EDIT: I have officially updated the post to better reflect this.

This sounds and looks really interesting. Good luck with your project!