Hey everyone! A couple of weeks ago, I started and finished a huge project involving adding the entire Graphics Repository’s contents to Lex Talionis. This means map sprites, animations, all the existing FE6-8 characters, etc.

Go to this post instead. The google drive link found below is outdated.

Hey, guys. I’m dumb. I think I removed the LT map sprites from the repo, which was intentional, but I did not provide the new link here, which wasn’t. This is Super Lex Talionis. It’s a WIP project I only work sporadically on. Long-time Klok fans may recall Super FEXP, which was intended to be “FEXP but it has all the fandom’s animations and stuff.” Super LT is the equivalent of Super FEXP, except it’s actually good. Clone this project with github, and whenever I make new updates for it, you…

Everything below this line is outdated!

At this point, I only have completed the map sprites. I wanted to make a post so that people who use either Tactile or Lex Talionis can download and use them all!

These map sprites use the LT naming schema, but they are formatted for both custom engines, NOT GBAFE. If you are using Tactile, you will still need to rename the sprites to fit them inside your FEXNA folder and make them work properly in-engine.

For LT users though, guess what? You can simply delete all the existing map sprites inside your project folder and paste this folder’s contents in. If you include this .json file here… 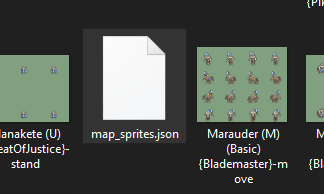 It will also organize all of your map sprites inside the editor (Assuming you use the BEEG update’s map sprite editor). 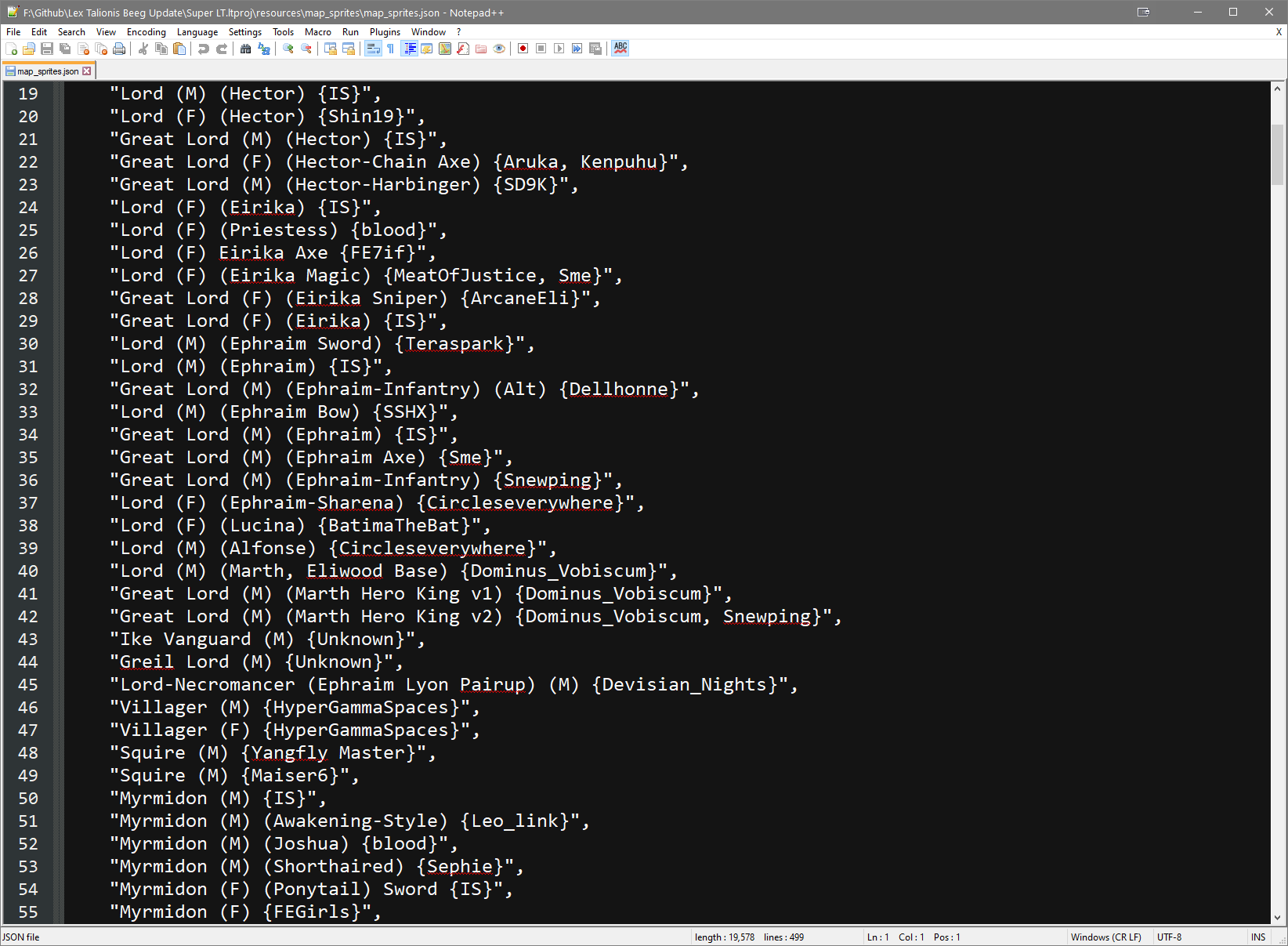 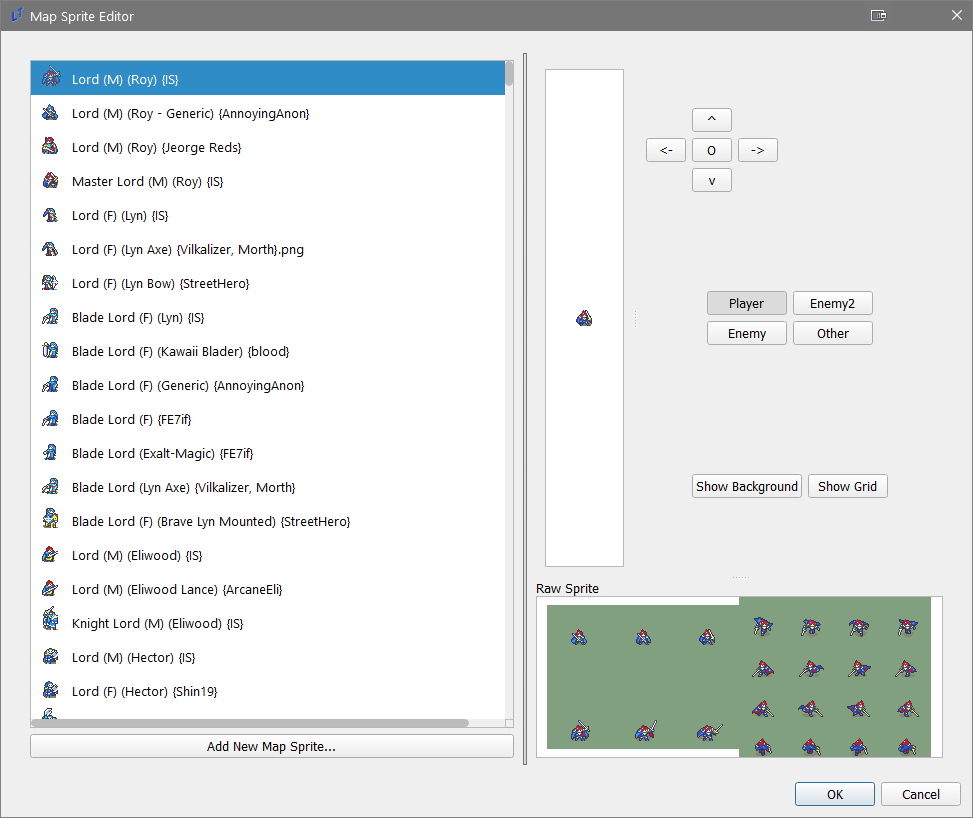 BONUS! All of the map sprites are named in such a way that they maintain their original credit! That means you’ll know exactly who made what and who to credit in your project.

There are a few sprites I need to fix. Some of the alignment on specific sprites, such as wyverns, isn’t quite lined up perfectly, and so on. If you spot any issues, let me know and I’ll fix them up and update this repo. I plan to make other fixes and will post in this thread when I add them in the future.

You can also find the map sprites inside the main graphics repo. (Click the pic to view) 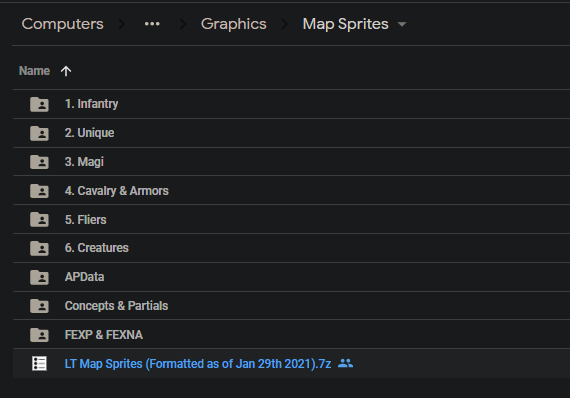 That sounds like it was a herculean task. Congrats and thanks for making the transition to these engines even easier!

So I did that.

Then I imported everything. The number of clicks that required was in the thousands.

After importing, the names were obnoxiously long, so I cut all of them down to a much smaller and easier to read format/size. (Thusly, I edited hundreds of names)

Then the sprites were only loosely organized. I had to drag them around, sort them by weapon type, role of each class, move the weird ones to the bottom, sort by tier, etc.

Then I had to go through and edit a bunch of sprites, specifically wyverns, because all of their spears were fucked up.

Then I had to edit a bunch of colors on some sprites, because they didn’t use GBA-standard colors.

And after all of that, I still have to import the sprites into classes, which is project specific but I also plan to release in the future.

Awesome! Thank you for doing this Klok!

Awesome work Klok, as always!! Do they work in normal LT without BEEG??

Probably. I barely used ordinary BEEG, but I think map sprites function identically in both versions? Check the Json files to ensure my BEEG version matches the normal one in your folder, as far as python formatting goes.

You will need to associate the map sprites with any existing classes. They have different names from normal LT map sprites, so that’s expected. Beyond that, shouldn’t be any issues?

Legacy also needs team variants, I think BEEG only requires the Player team and recolors on the fly? Not sure, but point is you’ll need to account for red (and green/purple if needed) in legacy, but there’s a tool that creates the other colors using the blue version so it’s easy enough to do.

I think BEEG only requires the Player team and recolors on the fly?

Yeah, this is true. I forgot Legacy needed all four colors. Beeg is best.

Hey, guys. I’m dumb. I think I removed the LT map sprites from the repo, which was intentional, but I did not provide the new link here, which wasn’t. 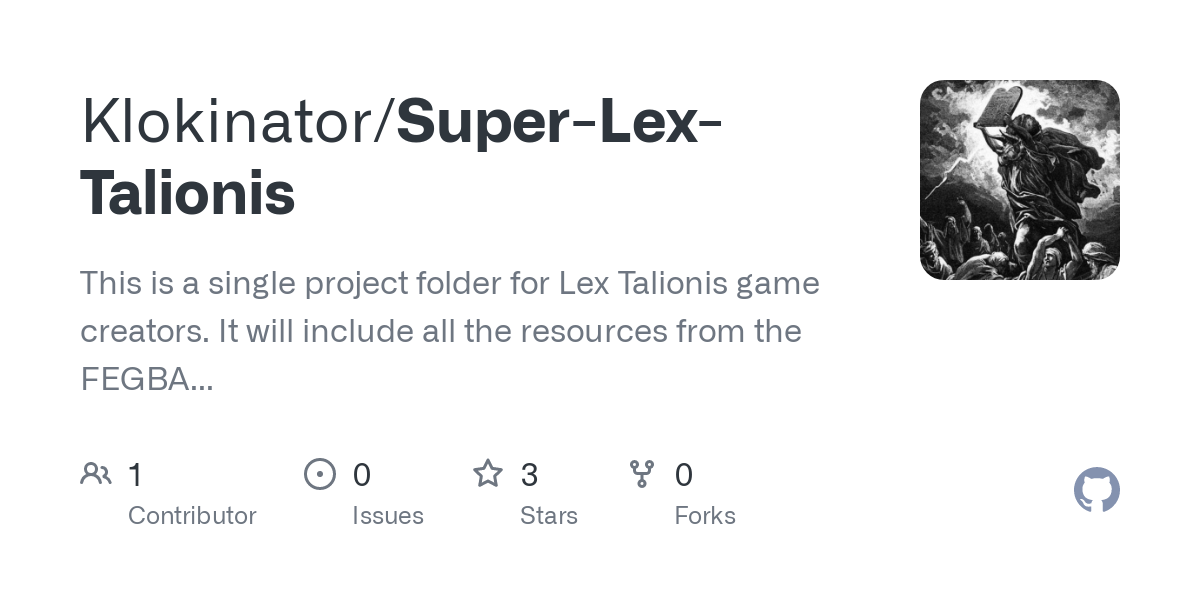 This is a single project folder for Lex Talionis game creators. It will include all the resources from the FEGBA Repository, where applicable, and thus can be used as a base for making games of all...

This is Super Lex Talionis. It’s a WIP project I only work sporadically on. Long-time Klok fans may recall Super FEXP, which was intended to be “FEXP but it has all the fandom’s animations and stuff.”

Super LT is the equivalent of Super FEXP, except it’s actually good. Clone this project with github, and whenever I make new updates for it, you will see all the new map sprites I’ve made, plus all the class cards. Currently, 95% of the repo’s map sprites and class cards are in here. This function only technically works with the BEEG update for LT, not Legacy LT without the editors.

This project is WIP. It’s not finished, and I can only update it sporadically because I am busy.

In the future, this project will also include every animation from the Repo, minus a few of the wackier ones. It will also include all of the FE6/7/8 portraits, plus portraits for Non-GBA FE characters, those found in mainline games. However, this last option is a bit tough to implement, as we do not yet have all of the FE characters in GBA format. This is one reason why the CCC Contests exist. If we can get every character made from every FE game, they can all be in Super LT, ready to go!

I plan to make this a huge ‘starting gate’ project in the future. It will come not only with Rainlash’s game, The Lion Throne, built-in, but also potentially FE7 and FE8. Rainlash himself is slowly adding FE8’s chapters one by one, and has reached Chapter 8. His Lion Throne game is also fully complete. Additionally, my guy @beccarte is slowly working on creating FE7 in LT, and he has reached chapter 9 of Lyn Mode, I believe.

Having all of these available in one package will give new users the ability to see how full games are formed. I will be sure to organize them in easy to understand ways, and will ensure Rainlash works with me to integrate them together. If we can get everyone working with the same cross-platform project, we can not only add new games into Super LT in the future, such as an FE5 and FE6 remake, but many other such ones as well! Combined with Lord Tweed’s LT randomizer, we can create a platform that fully rivals and likely even exceeds GBA romhacking on every front.

But, all of this will take time, and my time is limited. For now, Super LT is incomplete and only features map sprites and class cards. Use it for that, only.

Edit: Note that as of this post, I do have some map sprites and class cards from the repo I’ve not yet added. 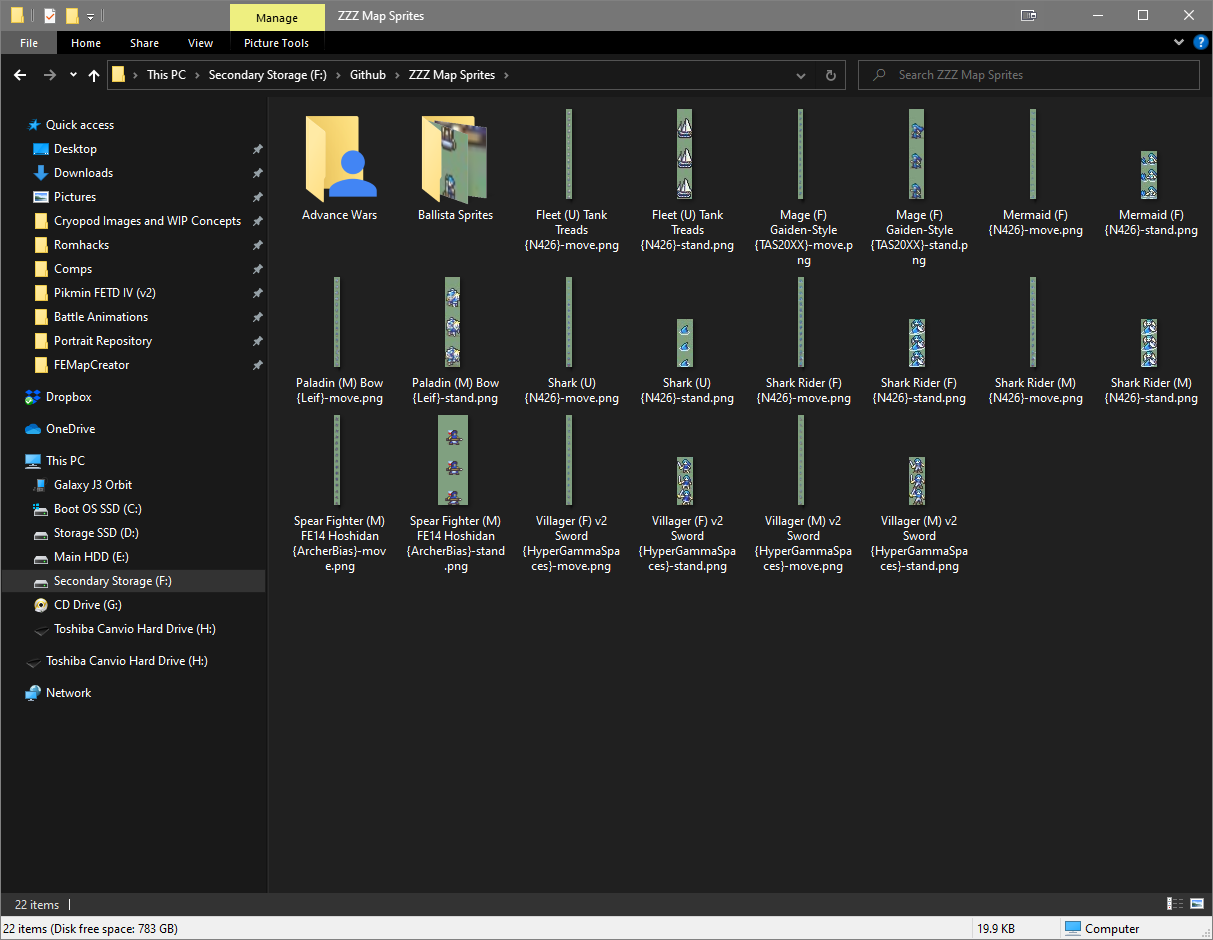 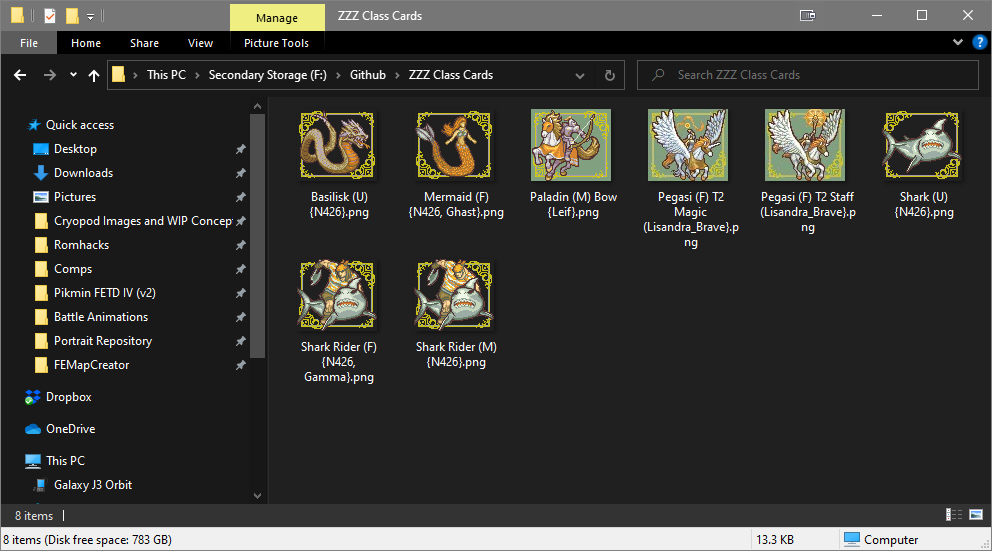 I’ll add these when I have time, but it’s not a high priority. I add sprites to these folders, then add them to Super LT in batches periodically.

Thanks, Klok. This will be really helpful for a lot of folks!

Yep, still working on full FE7 in LT with new features. However, real-life work has become suddenly crazy for three weeks, so it’s on hiatus temporarily. Planning to have the full game ready by the end of the year. I know it’s not an ambitious date: it’s a realistic one.

I mean, getting the other 20+ chapters in just 6 months is definitely ambitious. I thought it would take longer! If you succeed, I’ll be extremely excited!

So what changes need to be made to make this compatible with tactile?

Nothing that I know of. You just need to change the names to match the Tactile format. Note that I stopped working on this last year, so it’s missing tons of newer repo map sprites. Also, some of the sprites are not necessarily aligned perfectly. I didn’t get to test them all. Pay attention to the moving and idle frames ingame to make sure the tips haven’t been shaved off weapons, hair is properly attached to characters, etc.