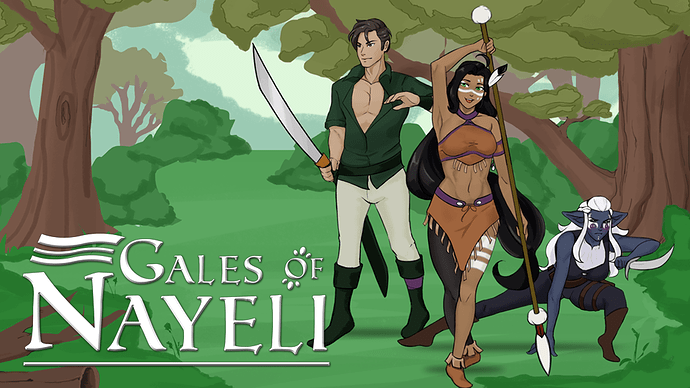 Over the past couple of years, I’ve been working on Gales of Nayeli and got most of the game in a playable state. In the past year, we’ve expanded the team quite a bit and we have been working pretty hard on making the game a polished package.

As we approach closer and closer from the Kickstarter Campaign (August 29th!), I felt like this was a great time to start sharing the project officially around here.

This is the Initial Reveal Trailer from a couple of months ago. Since then, we’ve been working on adding full battle animations and sprucing up the visuals.

Speaking of which. here are some screenshots :

Here are some of the core features to Gales of Nayeli :

And here’s a rapid fire list of smaller details that I find noteworthy :

This project is still very much in development and we’re aiming for a late 2023 release, so we’re very much listening to feedback as we progress!

If you liked what you’ve seen so far, consider supporting the project on various platforms. It really helps out a ton!
Kickstarter : Get notified when the campaign goes live. Early backers will get reduces prices on the game.
Twitter : We’ll be posting daily updates until the KS campaign and progress updates during development.
Steam : Wishlist the game to be notified when it comes out in 2023

Thanks for your time! I hope you’re looking forward to future developments!

This looks pretty cool, I’ll definitely be following along with this

I am doing an animation or two for this spiffy project, so check it out

You have my attention

Thanks a lot for the kind words everybody! It’s been really cool to hear all of the feedback so far.

I’m glad! Creating new items, skill scrolls and promotion classes and experimenting with different combination has been a highlight both for myself as a dev, but for internal playtesters as well.

I do think the choices you’ll be able to make around building your team will be pretty meaty and substantial.

Looking forward to share some more details soon,
Thanks again!

I’ll use this bump to share that the Kickstarter Campaign is now live!
Hop over there to hear the new VA announcements and get some more info on the game!

Thanks for giving it a look!

Bumping with a little snippet of some of the latest animations we’ve worked on!
What do you think?

Question what are the classes in this game of yours?

Every character has their own unique set of classes (one base class and two master classes at least).

For example, Keri is the party’s first thieving unit who joins as a Blade. She can promote to either Assassin (which gives her better combat potential) or Moonlighter (which gives her more mobility options)

We have been holding a few polls on twitter to determine which Master Classes to showcase during the campaign.

Here are the two first waves of showcased Master classes :

Wave 3 is still under way, but these are the classes that were showcased so far
Sharif - Militia > Dune Knight
Samira - Dancer > Blade Dancer

And there are some playable mounted archers (including the protagonist, Nayeli). These are mostly promoted classes, though!

Thanks again for the kind words! We look forward to bringing something playable as soon as possible!

Nice
Final question: Will there be other modes as well like hard mode, permadeath, casual, 0% and 100% growths, etc?

At the moment, the game has 3 planned difficulty modes :

Permadeath is interwoven with the game’s narrative regardless of difficulty. Some chapters have Permadeath enabled for story reasons (you will be told in advance when that happens).
This allows to raise the stakes for intense story moments while also giving a more reasonable scope for the story to adapt to the outcome of these maps.

I like the sound of that - am I right to assume that means if say unit A dies in chapter 3 the story may change down the road? And if they die instead in chapter 5 the story will still change but in a different way because they died at a different time?

Yep! If in your example Permadeath is enabled on Chapter 3 and 5, the characters would react in different ways depending on what happens in each chapter.

Of course, this could spread open the game into innumerable branches, so we’re limiting Permadeath chapters to big story moments, but when it does happen, we strongly encourage players to play through mistakes and see what happens. Some character growth will only happen in some of these branches.

This is such a brilliant idea, it’s simple on paper but no doubt extraordinarily difficult to execute! This jumped from ‘This is clearly going to be good’ to ‘blast that download button the second it is released!’ Haha. Keep up the good work!!

You’re too kind!
It’s always much appreciated to see some of my wilder ideas get some support!

And I’m using this opportunity to share that this is the final day to support Gales of Nayeli on Kickstarter! We’re pushing through to our second stretch goal at the moment, which will add some more post-game challenge maps!

That said, seeing the outpour of support has warmed my tiny heart and fueled the flames in my belly. We’re more motivated than ever to make GoN the best game it can possibly be.