A new patch, version 0.1.1 is up with the following changes:

As some of you may be aware of, I have started to work on new content (as in completely new maps and not hard mode versions). Upon playtesting I realized there was a problem: some of my units had started to snowball big time. Rather than just increasing enemy quantity I’d like to increase enemy quality, and in order to have more control over that, as well as aforementioned snowball effect, I’m going to do some re-balancing. Basically I’m going to decrease enemy levels and in doing so decrease the amount of EXP you can get. There might be some changes to enemy stats as a result, but it shouldn’t be anything too major.

I think that’s enough of my rambling. Here’s a little glimpse on a map I’ve been working on: 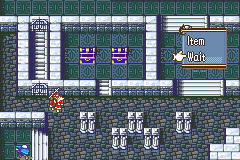 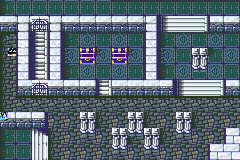 This is the first time I’ve seen that happen. I’ve played this map numerous times and I’ve never encountered this issue before. Send me your save file and I’ll see if this problem persists.

Your hack looks neat. I like the story and characters. I played but got stuck on chapter 3, the one that comes right after you make your choice to stick with your contractor or go against him. I guess I am just having trouble getting to the recruitable characters. Any advice on what to do?

I’m assuming you mean the map On the Run? I’m also going to assume you’re playing on Normal mode.

Are there any specific parts of the map that are giving you trouble? Overall, I recommend you open the upper door so that you can then send Camian to attack the archer, then pick him off with Avanni. As you proceed through the corridors, you might notice a couple of tiles that don’t quite fit. Those are floor panels that actually open up some pathways (look for walls that mismatch). One of the panels open up a shortcut to the middle area, which makes reaching Travond and Renaida much easier.

Just make sure you keep moving and if need be heal up your units with Vulneraries. After a few turns the Archers pop up. Don’t take them on just yet, instead use the panels to open up these pathways and make your way to the middle part. You should be able to reach them in time this way, unless you get really unlucky and the archer that comes from the upper corridor just refuses to die.

Yeah, that map, because I chose to go against the contractor. I was playing on hard mode, I think. lol I usually always just go for hard mode when playing projects, but I can always go back and start anew in normal mode, then try hard mode. Maybe that’s why I thought it was a little hard getting to them. I will use your strategy and see what happens in normal mode.

Yeah, Hard mode is pretty brutal especially for first-timers. I actually don’t know how many people have tried the hard mode. I’m making the hard mode with the assumption that players are already knowledgeable about this hack, because being able to plan things out helps a ton.

If you still wish to play the hard mode version, then I suggest that you buy a door key and use Camian for opening the door instead. Generally the approach is the same; make your way to the panels, then go to the middle part. This time around, however, you have to tip toe around the Sleep staff as well as the soldier, also pay close attention to how much HP Renaida has and if the guys at the upper area can reach her once you open up the pathway.

This map is actually going to be changed in the next patch. I got fed up with how linear and formulaic it currently is in my opinion.

No, I’ve actually started a new game in normal mode. Ha ha, for now guess I will stick to it and then tackle hard mode once I have completed the chapters you have done up to this point. You made a good point when you said hard mode was intended for those with a bit of knowledge about the game, so I will prepare well and then take on hard mode once I have completed normal mode. I’ll remember the tactics you suggested, though.

I wasn’t able to replicate the problem with the save file you sent me (it was blank?). I tested with two different emulators. This leads me to believe that:

If you wish to keep playing, you could try a different emulator and see if it still softlocks.
As for the emulators, I don’t know if naming / directing people to them goes against the rules,
as that could be seen similar to finding ROMs.

Time for a progress update:

I’m going to get this out of the way: I’m not going to participate in FEE3. I don’t feel confident enough submitting this project in it’s current state. I’d rather take my time and do all the needed polishing than rush this out just so that I have something to submit.

As for the balancing I mentioned I was going to do, it’s going well but is more time-consuming than I first expected. This has to do with some additional changes I’m making. Not only have I decreased the enemy levels, but also increased the hit rate of most weapons by roughly 20. Now this might seem like a small thing at first, but when I started playtesting the reality of it hit me in the face: some of my maps were borderline unbeatable without some RNG abuse. I felt like I had exposed myself, but on the other hand it was a good way to discover some problems in my maps. As such I’ve been reworking them in order to make them beatable without having to rely on manipulating RNG, and this has been the time-consuming part for me. For this reason new content has been on the back burner for the time being.

I’ve also considered adding more characters. My initial plan was to have a smaller roster and enough deployment slots so that you don’t need to bench characters, especially early on. However, the drawbacks of this approach have become more apparent to me. First of all, if someone decides not to reset after a unit dies, they’re forced to tackle the upcoming maps with fewer units. If you lose unit(s) early on, things are not going to get any easier in the long run. While you get more units throughout this hack, getting to that point where you get more units becomes harder, perhaps even unnecessarily so. This can be rather discouraging for the player.

Another reason for this idea would be that even some of the more harder hacks do provide replacements. I don’t think there are that many in this hack in it’s current iteration. More characters also means that should someone replay this hack, they can try out different characters.

Lastly, there are some class changes for existing characters I’ve been experimenting with, namely Seiris as a female fighter. I wanted a female axe user, and since the hero class was the first thing I could think of, I made Seiris a mercenary. It wasn’t until a short while ago that I realised she could very well be a fighter instead. You see, not only would she have axess - pardon the pun - to axes right off the bat, she would still have hero as a promotion option. I see this as an absolute win.

I think that’s all for now. If you’ve got thoughts and opinions on anything I mentioned, feel free to comment.

TL;DR: I won’t be attending FEE3. I have increased the hit rates for most weapons and now I need to rework my maps to be more fair. I’m thinking of adding more characters in order to add variety as well as a safety net. I’m also considering changing Seiris from a mercenary to a fighter.

Don’t needlessly bump topics.
OP when you want to resume progress, DM a mod to reopen

So, uh, I don’t know how to begin this update post, so I’ll just lead with this: The Eligor’s Spear will see its first full-length release very soon. There was a time where I thought the day would never come, but as I chipped away at it for the last few months, completing this project has become more and more apparent. Between my on-off motivation and other things requiring my time and attention, I’ve been hesitant to post any updates. I didn’t want to promise something only to walk it back later and not deliver.

The upcoming patch will feature full-length experience of one of the routes, the Grismond route. I focused on completing one route first, and since this route is what I’d consider “canon”, I prioritized it over the other one. Full-length in this case means all 21(+2) chapters, including gaidens, are playable on all difficulty settings, all cutscenes are in and there’s a defined ending players can reach. Of course, there’re still things I’d like to implement, but those will come at a later date.

As for content rating, expect it to land around 13+. Details on that will be provided upon release, but the main thing you’d look out for is strong language.

To those of you who already have downloaded and started playing the game, I thank you for taking the time to check out this project, but I also have to apologize because I think it’d be better to start over once the new patch is up. There are a couple of reasons for this, namely some compatibility issues and new content you’d otherwise miss out on. My apologies for any inconvenience this may cause.

That’s all for now. See you soon!

Eligor’s Spear v.1.0 is out! Check out the first/ opening post for details and dl link!

Congratulations on the release; this hack looks very promising!

During beta testing, has anyone tested it on real hardware (DS/Lite, GBA/SP)? Has anyone encountered any problems?

Thank you! Unfortunately, I cannot guarantee there wouldn’t be any issues on real hardware.

Hi! I may sound like a cheater, or else, depends on the person, but…