Ngh… this is terrible… House Akaneia must truly be cursed. As you know, two years ago… Hardin and Princess Nina were wed. In order to restore Akaneia to glory, a king was needed. There were but two suitable individuals: King Orleans’s younger brother, Duke Hardin, and you, Prince Marth of Aritia… Princess Nina begged me to wait just a while longer, but once I insisted of its absolute urgency… She said that it could not be you, for Princess Sheeda would grieve. In the end, Hardin was our only choice…
– Bishop Boa of Akaneia, talking to Marth, as he lays dying in front of Pales Castle

In this scenario, Hardin of Orleans had married Nina, but she did not return the favour. In truth, she loved General Camus of Grunia, who was thought to be long dead… That is how it goes in the original Mystery of the Emblem. But what if Nina chose the other option available to her? What if she chose to wed Marth instead, regardless of any grieving Sheeda might go through? Biraku Emblem serves to explore this alternate history of Akaneia.
Join Biraku, loyal knight of Hardin, as he tries to make sense of it all… 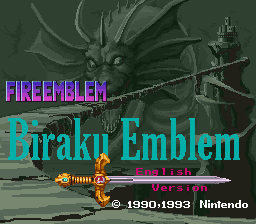 This patch translates the menus of Biraku Emblem. These should all be translated.
Please be aware that the dialogue is entirely in Japanese.

WARNING: The text does get rather risque at times, though none of this is translated. 7743’s post explains things in greater detail. 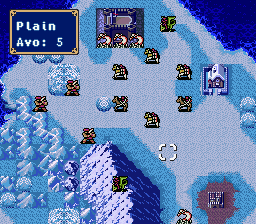 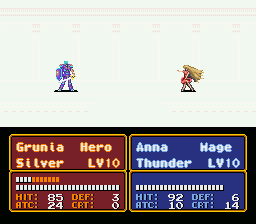 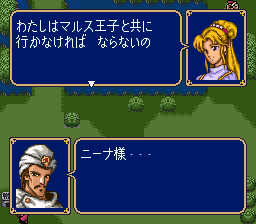 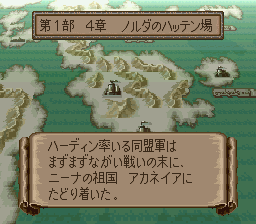 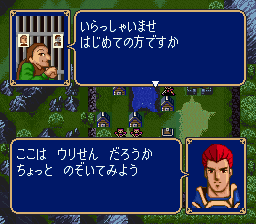 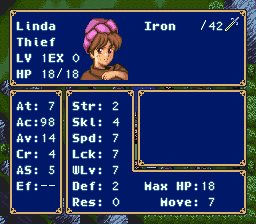 Can I get the link to the original Japanese project, so I know what it is?

The original Japanese patch is included inside the download. But if you want the original source, I believe it can be found here.

Oh boy have I been waiting for this day to come.

This is the best news I’ve heard all year

Someone asked me for this hack the other day, and now here’s a menu translation. What a neat surprise!

I have never heard of this hack before, but I suddenly really want to try it.

This patch will have a lot of net memes and will be hard to translate.

Development of this patch started in Part 2.
Part1 was created after Part2 was completed.

In Part 1, it is drawn until Hardin and Villak get married.
Unlike the original, Hardin fought desperately at Aurelis to protect the castle.
As a result, the Georgian army was unable to bring down Aurelis.
They attacked Talys directly across the sea.

In this patch, Nina has been interpreted as a bitch.
She is an evil woman who deceives men with her good looks and makes a fool of them.
She had deceived Hardin and ensured her own safety.
However, with the arrival of the more capable and younger Marus, she dumped Hardin.
After being dumped by his beloved Nina, Hardin was supported by Bilak, and their friendship turned to love.
They were to be married.

Part 2 features Marth, who has been tricked by Nina and has had his heart stolen by evil.
The two original characters’ positions have been swapped.

Bilak
The hero who marries Hardin.
Very nice guy.
In this patch, he is only interested in men, and very cold to women.

Bilak’s sword, the Viracle Sword(ビラクルソード), grants the man Effectiveness.
Why is Effectiveness in men? If you’ve read this far, you’ll know why.

In Part2, he is looking for Yumina who has been taken away by Gharnef.
He finally saves Yumina. (But Yumina will chase her heart.)

Wolf senpai.
He is a very reliable senpai.
In Part 1, he will appear in different classes in each village.
It is easier to clear them if you join them early.

Lena.
The alter ego that Arch sage Gotoh split.
FE3 has a bug that introduces a lot of Gotoh-faced Lena.
This is a joke based on this bug.

Dark Emperor Marth.
In part2, he married Nina and became King of Akaneia.
And his heart was trapped in darkness.

Vega
The Pegasus knight with glasses that appears in Part 2.
She continues the journey to bring Marth trapped in the darkness back to sanity.
Not Sirius.

I have never heard of this hack before, but I suddenly really don’t want to try it.

I am suddenly very glad Darr didn’t translate the dialogue.

These are real kuso miso hours

That is definitely a kind of character personality.

This work has a very unique character.
It’s interesting when viewed as a comedy.

By the way, this game is based on gay net memes,
but there are also works based on lesbian net memes.

Lily Emblem.
However, this work was not ups, only the video was published.
The author deleted the video, but the live play video remained.

Clarine plays an active part in this story as Onee-sama.

Clarine.
Onee-sama. The protagonist of this story.

Only Chapter 1 is made of games.

I’m gonna need a full translation of this, I have to know now