You Can Be Part of The Hack!

For the ROM Hack that I’m currently working on. I am planning to make this project a big one for other people like you and me to enjoy.

In hesitation to prevent this catastrophe. Calvin (the boss) decided to ask Samir to form a group of his own to stop the bandits from attacking the village. After known where the bandits are. Samir united the group that consist of these three people.

They went to the bandits hideout and saw the leader of the bandits, Jacob.
Samir then proceed with caution when a bandit came up to him and interrogating them on why they are on their “territory”. After realizing they were mercenaries, the bandit then tried to attack Samir, but Samir killed him afterwards.

With the last draw of breath, he shouted in the air saying that they are being invaded. The group proceeds to raise arms.

At the end. Ahmed was horrified on the fact he killed someone for money, and blames it on Samir for putting them in this mess.

They returned to Sern for their money.

The Roles that I made on the server are listed here.

Animators (Sprite designers)
If you choose this role. Then, you make animations for the ROM Hack and for the whole community. To send it. Compress it. Then, post it. Easy as pie!
(Anyone can be in this role anytime)

Meme Historian
If you choose this role. You specialize in memes and their formats from Grumpy Cat to modern era of memes. Hell, you might even discover new memes or make one of your own to make your own imprint on history.
(Anyone can be in this role anytime)

Musicians
If you choose this role. Take the baton, Mozart, and start making all kinds of music.
Music is important, since it can simply effect the mood of the game play. If you want, make CrazyBus Theme Song 2.0. Oh God… What have I done?

(This role is decided by the creator of the server: SamirPlayz)

Play-testers
No Ragefest from me, just Dawn of Destiny. Your opinions and ideas are private from the rest of the server. If you are caught sharing any updates, the Officers will delete the message, and a 1 day banned. If again, 3 day banned. If AGAIN, THEN you get kicked out. Three Strikes! You’re out!
(This role is decided by the creator of the server: SamirPlayz)

Fooker
They are frickers that have high expectations. Equip: Memes
(Anyone can be in this role anytime)

Idea Guy
If you are a type of guy who like to share ideas with the sever. Then this position is for you. Share your ideas in the community.
(Anyone can be in this role anytime)

Anime Master
Like anime? Eat ramen? Well, Naruto run over there, dude. Realistic, it is just a role that people might enjoy.
(Anyone can be in this role anytime)

The “Officer”, “Musician” and " and “Play-tester” roles will be determined by me.

Here are the treads on the sever.! 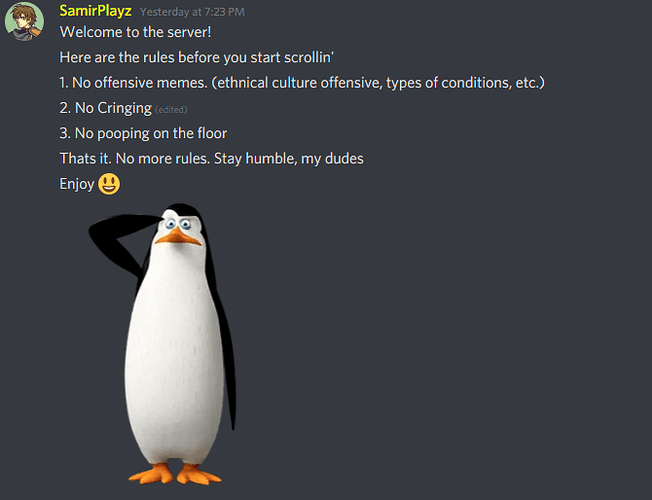 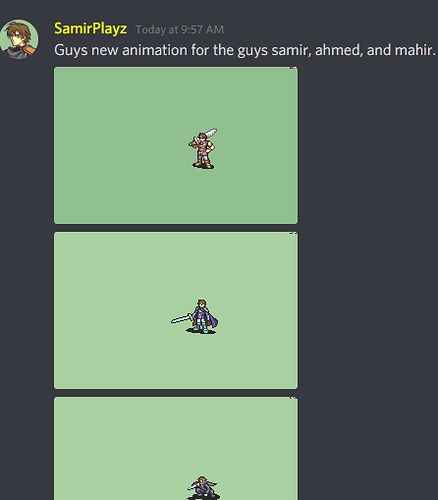 17 posts were merged into an existing topic: The Dawn of Destiny v1.0