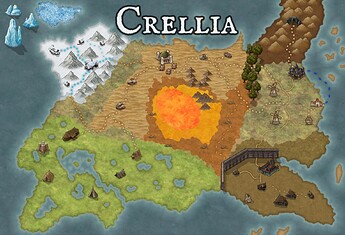 Hello everyone! My name is milom and I think it might be time to create a page for my WIP hack Fire Emblem: The Order of Frost.

I got into rom hacking in 2020 after I very clumsily used FEBuilder the first time to make a 0% version of FE7, which soon thereafter turned into a classic rework/rewrite of FE7. This however led to a new project that’s been going on from time to time a year and a half, based on a very loose idea for a table top rpg plot I had a long time ago. I can with 100% certainty say that I would never have gotten as far as I have without the inspiration gotten from the incredible talent, friendliness and support I experience in this community.

So what is this hack about?

The continent of Crellia is in a delicate state of balance woven between five different countries united by a common threat. 600 years ago the continent was put into a state of despair when, by events lost to time, an enormous rift filled with flames opened at the center of the continent. From there, an endless stream of flaming fiends began pouring out, and only by uniting and combining each countries strengths did they manage to keep this threat under control. The rift have since remained, and an order was established to keep this ever present threat in check: The Order of Frost.

Our story starts in the year 611, when events are about to unfold that will shake the delicate balance of Crellia forever.

I hope that this will be something that eventually can be enjoyed by many of you in this community. The first patch will soon be out!

Good luck with the project Milo, might give the first patch a playthrough

Looks good, i’ll be sure to try it

hope difficulty will be like hard mode, been playing some games lately wich are wayy too easy!!!

The hack will (at least at first) only have one difficulty. The idea is for it to be harder than FE8 by quite a bit, but still manageable without having to replay every map 34 times. The eventual playtesting will help answer how well that went.

Unique promotions for all playable characters

Unique you say will there be playable monster class?

Also good luck on the hack. 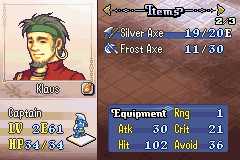 @Blasteroid
Please do not triple post in a thread which isn’t yours.

Woops sorry about that.

And thank you for the support!

I’m surprised something I did or rather made actually ended up in a hack lol, looking forward to playing it once the demo is out!

To be honest, exactly how to handle the monsters is something that is in the backlog as of now. There is a high probability that some sort of manaketes will be in the hack however.

As for you @Its_Just_Jay, one of your portraits will be in the first demo even