Wouldn’t FE7 be amazing if you had to play it on a command-line? What’s that? I’m sorry, I can’t hear you over how amazingly awful this idea is. 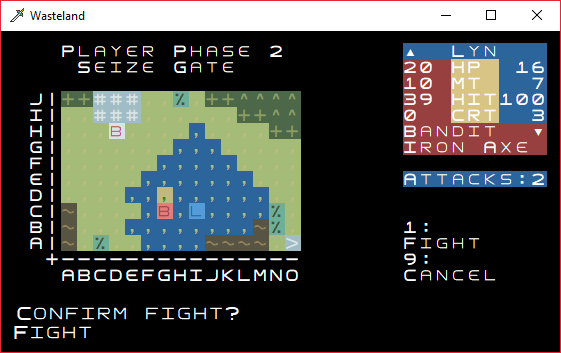 I had already started work on a Fire Emblem engine (I’d like to make my own game some day!), so since I had both means and opportunity, Wasteland was born!

Q: So this is based on FE7? Is there a ROM somewhere in there?
A: It is based on FE7, but I have reverse-engineered every single piece of code in this darn thing from scratch! It took me over 100 hours to get to Wasteland v2.0.0, and if you’re reading this and we’re past v 2.0, it’s taken some time longer as well!

Q: So how much of FE7 are you going to remake?
A: Well, I started off wanting to do the first two maps, which I’ve got now with v2.0. Then I thought I might do the whole of Lyn’s story. Then I realized I had made a poor choice by limiting the game area to exactly 15x10 and decided I’d stop before the first chapter that is a larger size than that (the 5th map, chapter 4).

The size thing isn’t insurmountable, but it’s a lot of work, and I’m not going to cross that bridge before we come to it. 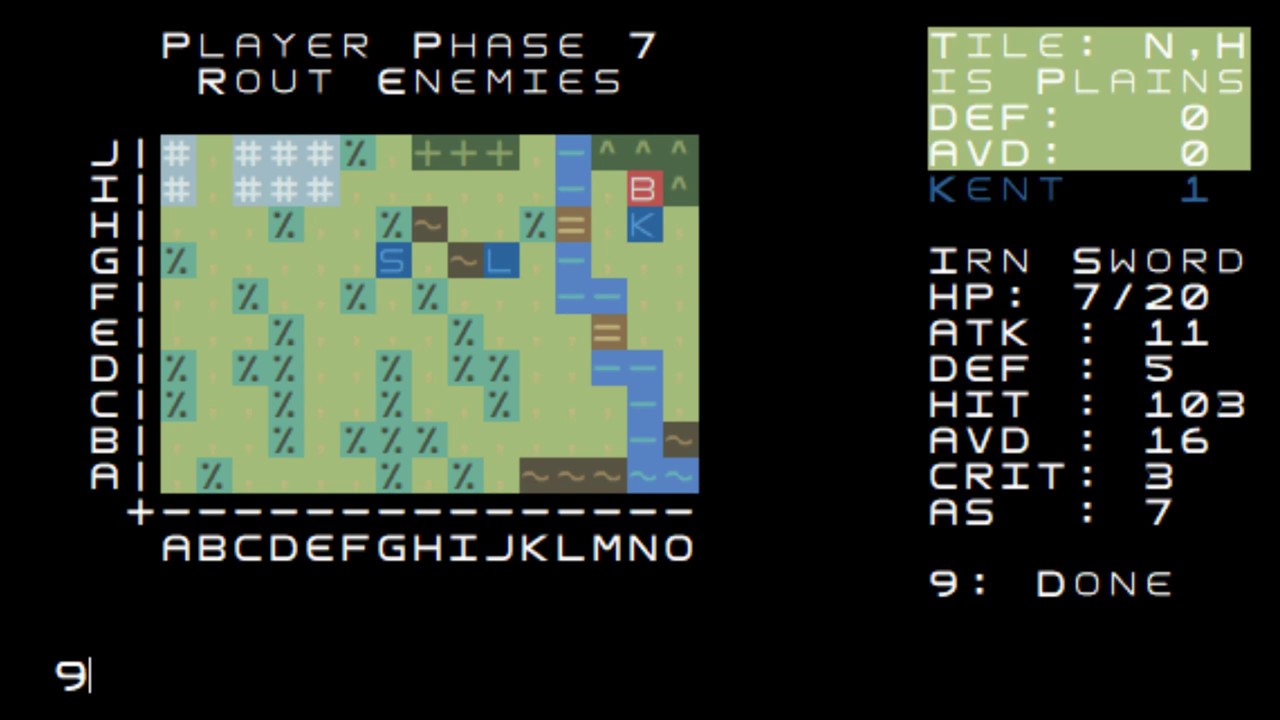 The latest build can be downloaded here:
Wasteland v3.0 - https://1drv.ms/u/s!AnNN78-U93SKgeJZBpBhcPRkhf0Oxg

Stupendous my friend but may i ask: what about battle animations? (just curious)

Given the medium, there’s not many options. Currently it’s Dragon Quest-style scrolling combat text. (Minus all the "thou"s and "thy"s.

If you have alternative suggestions, I’m all ears, though!

This looks so bad and yet so good. Can’t wait to see where this goes.

that’s how bwdyeti started making fexna (I mean everyone starts from somewhere.)
I’m sure this will end up looking great.

I was gonna talking about it. (Microsoft xna iirc)

Happy to report that I’m releasing v3 of Wasteland today!

It is going to look mostly the same to the end user, but the entire innards have been retooled in a way that will make it easier for me to develop things out of this engine in the future. (Both for Wasteland and the projects that come next!). I don’t know how many of ya’ll actually played the previous game, but there’s definitely less crashes than before, in addition to 50% more levels! (For a total of 3! Amazing!)

As before, comments, thoughts, criticisms, and ruminations welcome. I would expect v4 to come out much sooner than the gap between 2 and 3 – the main thing to include will be the last planned map, Band of Mercenaries, which I already have 90% the infrastructure set up for – just gotta implement shops.

This entire project is silly, but something about the idea of using my letters to spell out words Scrabble-style while I kill my enemies for style points is appealing.

excuse me one does not simply forget about oswin

Shit. I scoured my mind and the wiki looking for a character with an O name. I am shame my famiry.

Well, friends, here we are.

It’s been a bit of a journey to get here, but I’m finally ready to sign off on this project as “Done”! Featuring the first 4 chapters of LHM in thrilling ASCII, this has been posted to itch.io if you’d like to have a go yourself.

Looking over the amount of time spent between versions 3 and 4… (16 hours recorded), there’s no real reason it needed to take 3 months to get here! But, as they say, life happens! See y’all for the next project!