I thought of adding playable brigands in a Romhack I’ll be attempting to make soon and I’m currently thinking of several ways to help make the Pirate and Brigand Classes unique from one another.

I’m leaving Pirate alone since it’s a good enough class to begin with, however I’m still in kind of clueless as to how can I make the Brigand stand out.

One idea I had was to make the Brigand act like more of a utility class, with the ability to tear down certain defensive tiles (turns Forests into Plains, turns Forts into Ruins, etc.) but I can’t for the life me think on how to balance it.

Feel free to add your own idea on how to differentiate Brigands and Pirates on more fronts and niches rather than what kind of terrain can they traverse. Thanks!

I feel like the easiest (and potentially boring) approach wpuld be to just mirror the Merc/Myrm/Thief split, but for Axes.

Fighters are the Mercenaries, Pirates are the Myrmidons (agile and quick), and Brigands take up the Thief role (Stealing, but not the same stat spread).

What if Brigands had a good magic stat? Add in some magic axes for them to take advantage of it. That could make them distinct.

I’d do something similar to FE6 where Brigand is the more all out offense at the expense of Skill oriented class and Pirate is the well rounded Axe class. Except you know, actually making those playable Axe users good at base : P

High base STR, DEF, and CONS.

Everything else is below average.

This makes for a unit which can rescue and handle big axes well.
They can also hold off enemies like an armor knight, but get the full movement of a fighter.
Plus they can walk on mountains too.

This honestly makes for a pretty badass unit.

I’ve played around with there being a brigand/PC dichotomy in a hack, like there being a mercenary/knight/archer/armored alternative for bandits, with their own promoted classes. As far as playable classes, emphasizing a niche, like making them fighters who are all about the alpha strike, higher HP and Skill, lower defense, or maybe the myrmidon equivalent for fighters (seeing as they usually become berserkers) so they are fast, crit happy axemen

Since you’re already toying with the idea of having them remodel the map, I take that to mean there’s a good degree of ‘anything goes’ here.

My brigand-as-a-class suggestion would be to have them gain increased bonuses from defensive tiles. More so than pirates and fighters, brigands have a very “pop out of this nearby mountain to dunk on you” feel to them, and benefiting from concealing terrain meshes well with their existing uses in vanilla FE stories.

If you’re messing with skill systems and you’re very brave in map design, you could make a brigand your unique Capture guy, since they normally have high CON and fit well with the kidnapping flavor.

One solution could be to improve brigands across the board compared to pirates/nerf pirates, but give pirates access to special weaponry in the form of light axes (specific mechanics at your discretion, but a player phase brave effect is the first thing that comes to mind). Pirates have the most unique axe animation in that they use two axes, which is where this idea came from. The downside is that there isn’t really a promotion that does that.

Or you could just make them really good at throwing axes, like bonus hit/might with them. This works best if your setting is the setting of Kung Fu Hustle.

First of all, will they promote into the same class(es) as Pirates do? They do in Vanilla GBA FE, so they have the same endgame.

If you give them a new class that they can promote into, make Brigands themselves synergize with the promotion bonuses, caps and properties/skills that they will end up having as the promoted class(es):

If you won’t add a new, exclusive promotion, I’d go in a similar route as LordGlenn said. Fighters as physical tanks, Pirates as glass cannons and Brigands as the balanced ones.

That’s how I do it, usually seperate the classes into
High Str, High Skl, High Spd.

I had a promotion in mind for the Brigand called Brawler, where they ditch the movement on mountains to have the ability to outright disregard the weapon triangle. This gives them a double-edged sword since they can score hits on Sword Users but Lance Users can also have a decent chance to score hits on them.

Though I may not like the ability as much, I wonder what do you people think?

I think removing mountain movement might be too much. But regardless of that, is it possible to give a class the ability to ingore the weapon triangle altogether?

I imagine it is, but I’ve never seen someone program it.

Personally, I think I’d lean towards Pirates being comparatively balanced axe-users, Brigands being way in the direction of huge HP and Strength but bad Skill and mediocre other stats, and Fighters falling in between those two.

I think that really, the bottom line is Pirates and Brigands are both sort of… “Flavor classes”, for lack of a better term. They were implemented with the intention of them being essentially Fighters with some slight ability differences based on where they’d show up as enemies, and the main differences being cosmetic. That’s not to say that it’s not possible to differentiate them, but they are all infantry axefighters at the end of the day, and there’s only so much you can change that before they just become unrelated classes borrowing the names of the Fighter/Pirate/Brigand trio.

Gonzalez 2 but he marries Lilina or whoever your young noble princess in your hack is. That’s all

As king his country becomes Verdane but awesome

Gonzalez 2 but he marries Lilina

Good ending to my boy at last. 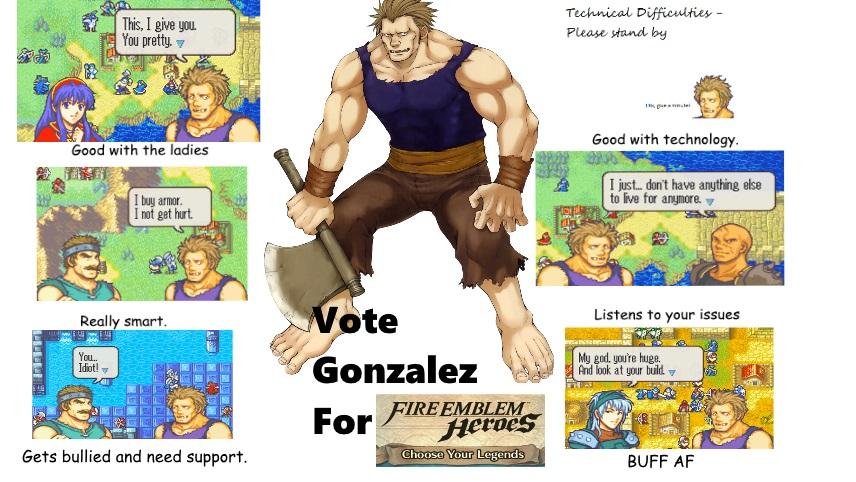