Hey, it was a joke. Be cool man. Be cool and spin around in an office roller chair.

If only I had included it in my quote.

Your repalette looks awesome! This is the best interpretation of Hector’s Great Lord until Jeorge Reds completes his Elibean trio set

I did a lot of work today. As I mentioned in one of my previous posts, I plan to eventually make a FE7 and FE8 Enhanced Edition. To that end, I’ve already started getting to work on the planning phases for the FE7 version. I made some palettes for the alternate Lord promotions I’ll be using, which are quite neat to look at. Sax-Marine’s cool new Brave Hector repalette put some wind in my sails, so I felt a little inspired, but Dedester actually made these palette choices.

The classes you don’t see are the lords’ three vanilla classes, and Lyn’s ‘Brave Lyn’ class. None of them needed repaletting, but the ones above did.

Also, deets on the promotions: 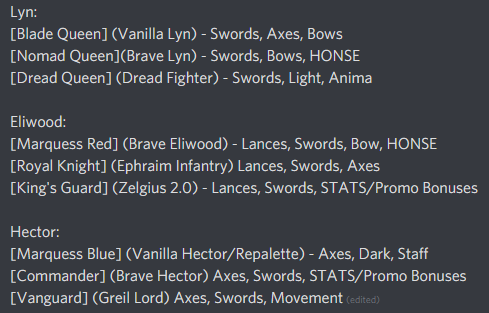 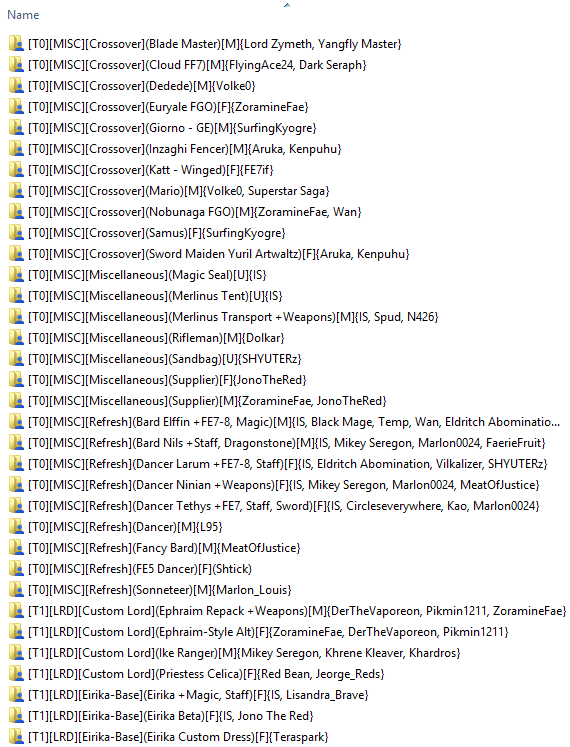 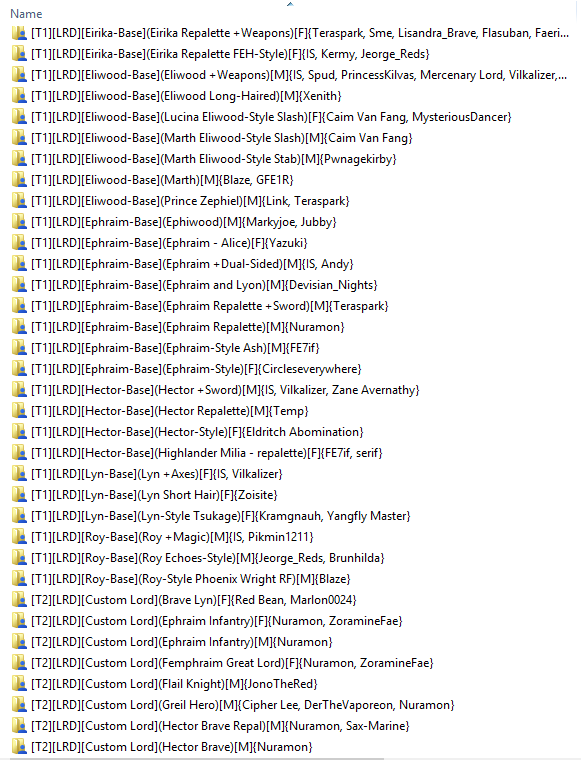 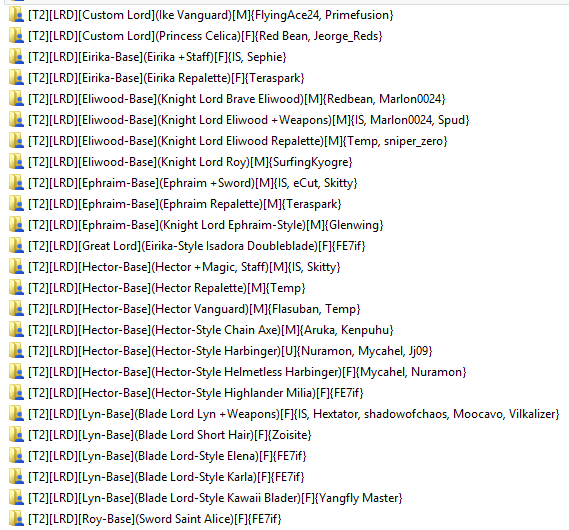 It may not be immediately obvious what changed. Let me elaborate.

Previously, we had two tags eating up 80% of that folder. [Lord] and [Great Lord]. This was dumb. The Lords folder was the second repo folder I ever made, and when I made it, this was two years ago before a LOT of cool new animations had been made. Now that I’ve seen how the Repo has progressed, I was able to make some changes.

-Lord/Great Lord are now split up into Roy-Base, Eliwood-Base, Lyn-Base, Hector-Base, and so on. These ‘bases’ are about the movements the units move. If an animation directly or heavily references, say, Ephraim’s T1 animation, it gets an [Ephraim-Base] tag.
-Custom Lord is used much more heavily. Nuramon’s fantastic animations stick out a bit more and are easier to find, now. I had one big deliberation for the Ephraim Repack folders, which technically use Ephraim’s standing frame as the base, but all their movements are fully custom. Since this directly promotes to Master Knight, and all those anims are custom, I made it a T1 custom.
-I changed ALL the Crossover, Miscellaneous, and Refresh animations to T0. This is to keep them together. I kept a few Crossover animations with some other Lord-Bases, but only if their movements used that lord’s base.

One downside of this change is that some animations, like Brave Hector, now aren’t with the Hector-Bases… because they don’t use those lord’s base animations. I seriously debated this choice, but in the end, custom animations are custom, and I want the repo to be consistent and practical. Custom Animations also tend to come before all of the lords, so in a way, they stand out a bit more, too! Perhaps in the future, I’ll look into dual-tagging certain animations that might go in two spots. We will see.

Anyway, no progress on the gigantic still sheets, and I may even need to totally redo the Lord sheet (or simply realign my current sheet to match the new Lord folder’s organization) but either way, the repo is much improved today! That’s what counts!

…Also, the site won’t mirror these repo changes I’ve made, not for a while. I plan to look into certain other folders to see how much more consistent I can make them. We will see!

What’ve you’ve done so far is amazing, those new palettes to those sprites would be great for the lords. Also, when you said Fe7 and 8 enhanced edition, does that mean you’re gonna try to port Fe7 to Fe8’s engine, or just make a bunch of new classes? Because it would probably seem too much work to try and recreate one game in another’s engine. Keep up the good work

Also, when you said Fe7 and 8 enhanced edition, does that mean you’re gonna try to port Fe7 to Fe8’s engine

FE7/8 Enhanced are upper-smallscale projects that will just… improve FE7 and FE8. Nothing huge. Some important game fixes, some other alterations. The ‘big stuff’ comes in that I will add tons of animations from the repo to really make the games pop. Stuff like adding Salvaged and Nuramon animations, anything that will overall improve the game. Dual promotions for classes, a few T3’s… it will make the game interesting enough to be worth replaying for us oldies.

But… more on that later. I’m not quite ready to post or announce anything, just throw out some wip stuff.

So, I went through and updated the old sheet. By ‘updated’ I mean ‘redid all over again.’ I cheated a bit and copied off the old sheet where possible, but for the most part it was all from scratch.

This is a total revamp of the lord sheet. You can see just how much better the Repo is organized now!

Here is the original version of the Lord sheet: https://i.imgur.com/FICgLaq.png

Here is the new version!

Hey, I know this is old, but I wanted to use these animations and the link just leads to a deleted page. Do you still have them?

Both of those are in the repo, though? 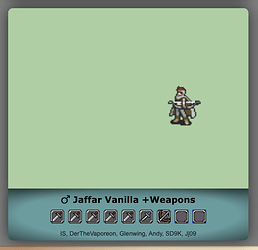 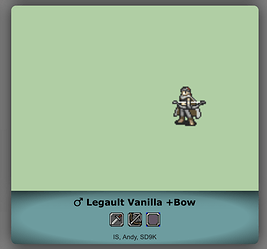 Be cool and spin around in an office roller chair.

Update 4! I’ve moved on to Cavalry and Armor!

Compared to all the other folders, this one is very smol. However, what it lacks in height, it makes up for in girth. These animations on average have more weapon types per folder than any of the other root folders, like Infantry/Magi/Lords.

I found one big goof with this guy… not sure what’s going on here, but I did leave a star to look into it later.

I was struck by how remarkably consistent the animations in the cav/armor folder could be. Sure, there are some animations that are missing a few weapon types, but for the most part, animations of one niche tend to all have the same animations, making it easier to use them in a project. That’s pretty cool!

Some animations got a little screwed up. This is because I just copypaste from the frames onto this big sheet, and then at the end I go through and delete all the ugly color squares from animations that don’t use the standard green. However, some animators choose to use colors like pure black, white, or even GBA-colors that other animations use. If I change their BG’s to the repo-standard green, it messes up those related animations.

Sad, but true. I don’t plan to go through and fix the animations that look a little wonky; at least not yet. Maybe later, when I wrap all this work up.

I am not looking forward to monsters. That folder is a goddanged mess.

Tired of thin baby-boy swordmasters? Want your wielders of Sacaean thousand-folded steel to be more…masculine? Look no further.

This is an edit of the Hawkzerker animation from the repo, to add in the spiked warrior shoulder. F2u, F2e.

The timings might be a bit off, and if so you might want to edit them. The gif seems faster than the animation when I insert in ingame.

Updated link, since I updated the animation to make it so the left arm bracer doesn’t change sizes so offensively.

Oh my god that looks so good, could use some polishing up but damn that looks good.

This looks awesome! I did have a bit of an issue with the ranged animation, but that’s nothing a small bit of editing can’t fix.

I also found it weird that the Male Nomad Sacaean repallete had an Axe animation for it’s promotion put in the wrong spot, that definitely needs some correction to avoid confusion

What animation are you referring to specifically?

…The one with the red star beside it?

As usual, credits to Pikmin1211 for helping me out with this edit as well as eCut and Skitty for the original.
I was debating adding lightning effects but needing to rely on skin shades for the 2nd electric shade would mean it’d look bad on a different skin tone, so I just decided to make an extremely basic magic axe frame.

Here’s a video of it in action: 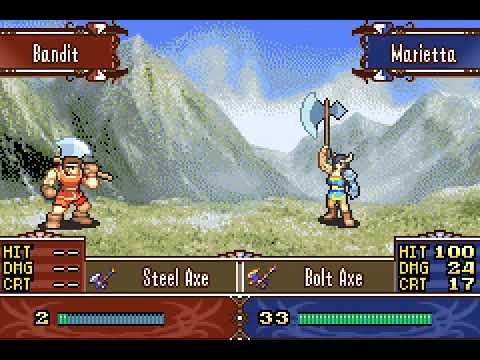 In typical serif fashion I forgot the download link, so here it is! It contains hand axe and unarmed animations too so you don’t have to scroll back to the original release post.