So I was surfing Serenes today and some guy found a Japanese blog.
Here’s the link. It has a lot of interesting information on it, such as documentation on Gaiden’s internals. However, one certain article piqued my interest.


There’s actually a hidden debug menu that lets one test the combat! (And no, opening it in the translation does not result in garble.) There’s many variables around to test, and I don’t know what most of them do. I did take some notes from what I could figure out, though.
note to self: put this in a more permanent location
Changing the variables changes what settings are used in combat. It’s certainly a lot spiffier than the FE1 version of the battle test, anyway. That was an experience to mess in.
Wanna see this yourself? Set RAM addresses 7E074A and 7E0C0B to 06 in order to access the menu. I recommend BSNES+ for this.

EDIT: The blog’s wiped all of its FE info, sadly. Only its Dragon Quest 3 info remains. The post itself is not archived, but the category it was in has been, containing all of the post, though without most of the pictures. I edited the link to the Internet Archive’s mirror.

ok kids it’s Translation Time. spent the better part of the day poring over as many corners of this thing as i could find, and this should be just about everything. there’s a fair few values that i can’t seem to get to work, or at least i don’t realise they’re working. anyway. first up, 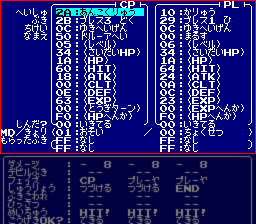 this bit here. just about all of its settings are related to displays, etc. left hand column is enemy-side unit, right-hand column is player-side unit 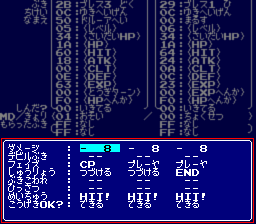 this bit down here. press SELECT to switch between it and the top menu. these alter what each strike made in the battle scene actually does 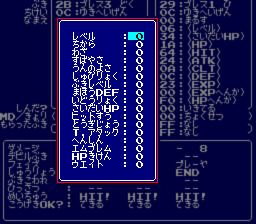 a few quick notes on the lists of items, classes and names that you select from. it’s all just the usual internal order, so if you aren’t sure what you’re selecting, consult just about any gameshark guide or nightmare module’s list of this stuff and you’ll have no problems. there is, however, an interesting wrinkle. the debug menu seems to read from a completely separate list of names for these things than what actual game menus use, and there are some very interesting differences. for items…

i haven’t looked through the unit names in much detail, but i did notice that it amusingly spells marth in hiragana (まるす) so. there’s that.