Also, I somehow forgot to give 16x a win condition. That’s been fixed now.

Alright, I’m posting this after having played uh, 5 chapters? Since chapters 5 and 6 have issues.

First, the gamebreaking things. Chapter 5 can’t be played, as when you stop on the dirt tile to open the storehouse, the game plays this dialogue and immediately goes to chapter 6. 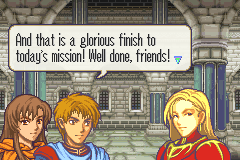 Secondly, Chapter 6 is unplayable. First of all, the map has no enemies on it. 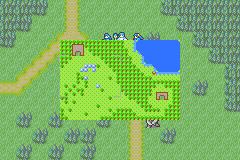 Then, there’s the problem of crashing. When I moved a unit into approximately this space, some dialogue played and the game completely crashed, rendering me unable to progress further. 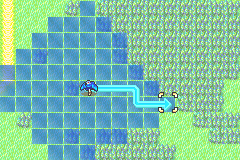 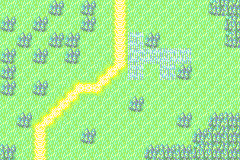 Next, I guess I’ll go over story? I’m not a story guy at all, but I did read all the dialogue.

Here’s my overview for each chapter.

And that’s it, since I didn’t get to play chapters 5 and 6 properly. Whatever I said here, I want to let you know that I don’t hate the hack or anything, and I’d like to see it improved.
Also, I believe the reason you haven’t been getting any posts in the thread is because you haven’t been replying to it regularly, yes. Without replying to the thread, it gets buried and no one really sees that, so you should be doing it more often.
Wish you the best on your future endeavours! I’d love to give the hack another try once chapter 6 is fixed.

Thanks so much for the feedback! I’ll look into the problems with Chapters 5 and 6 as soon as I have time!

I actually can’t really get rid of the Prologue chapter that easily. As simple as it seems, the events that happen there are actually important to Chapters 11-14. (Also, about it being a Lyn mode reskin… It literally is. It’s the first map I ever made, and I didn’t know what I was doing, so I took the safe route. I’ll definitely go back and upgrade the earlier maps at some point.)

…I thought I’d fixed all the times I called him “Lewis”. There used to be a lot of that. Looks like I missed one.

BTW, how do I change the effectiveness from 2x to something higher? I’ve wanted to do that, but I don’t know how.

BTW, how do I change the effectiveness from 2x to something higher? I’ve wanted to do that, but I don’t know how.

…I don’t know enough about how romhacking works to understand this at a glance, but I’ll do my best!

I’m trying to solve the problems you had with Chapters 5 and 6, but I can’t replicate the problem, for some reason. Any idea why that might be, or what I can do about it?

For chapter 5, I used the archer to stand in front of the place, and for chapter 6, I used the thief. I’m not sure what other information I could give you to help. Looking in builder, I don’t see anything causing it either, so it might have just been an anomaly? I don’t really know, sorry.
edit: what emulator are you using? it might be an issue with that.

That explains it. Using VBA will let some glitches pass by that occur on the more hardware accurate mGBA emulator I’m using. Not sure what the fix is, though.

I’ve done a bit of testing with a more hardware-accurate emulator. Not only are all the issues you pointed out (minus “Lewis” and some sub-par map design) showing up here, there’s actually some enemies that are flat-out refusing to spawn, such as a second cavalier in Chapter 2, an armor knight in Chapter 3, and the first wave of enemies- including the boss- in Chapter 4.

It seems something like VBA may be needed to play this, at least until I figure out how the hell these bugs work.

Having not looked at the hack in builder, I will say that I’ve played another FE7 hack where certain reinforcements did not load on non-VBA emulators, and the issue was that

I’ve definitely used that command a bunch, so I’ll look into it.

EDIT: Okay, so I’ve subbed out all the instances of loading units without “If Player Unit, Join your party” in the first 6 chapters. I haven’t tested whether it solves the Chapter 5 issue of playing the end event early, but it seems to have fixed all the other errors, as far as I can tell!

EDIT #2: Seems the Chapter 5 error was fixed too! You’re a freaking lifesaver!

Thanks to some advice from @knabepicer, the errors seem to be fixed! I’ve put up a new patch (v.06.3) that should have everything working as intended!

@Relic brought to my attention that playing this hack on emulators more hardware-accurate emulators can cause problems. However, thanks to some advice from @knabepicer, I’ve been able to identify the errors, and (hopefully) get them all fixed! A new patch (v.06.3) is now up that has these fixes.

Hey, I just finished chapters 5 and 6, and encountered another issue with the game crashing. 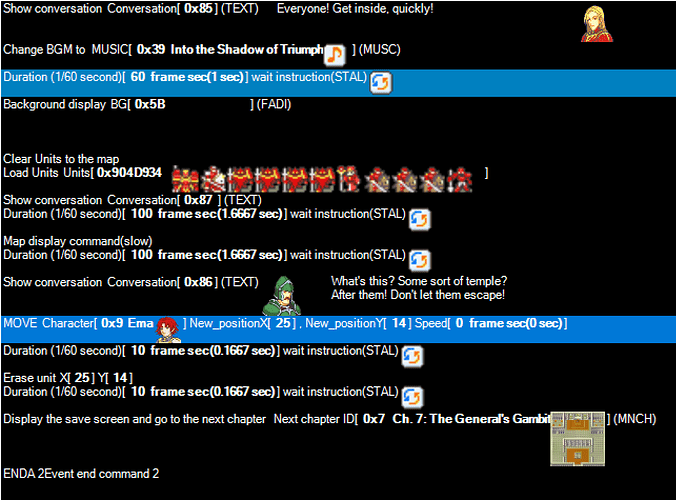 Gameplay roundup for chapters 5 and 6:

Sorry if again it seemed too negative, but the issues here are pretty simple and I’m confident these chapters can be fixed easily by you.
In addition, I had an idea that you could turn the first chapter into a cutscene, if you don’t want to remove it entirely.
Once again good luck on the hacking, and maybe look for a few more bugs like the ones I encountered before updating again, haha. I’m looking forward to playing more.

Ugh, I can’t believe I missed that one at the end of Chapter 6. (Also, how the hell did I tell it to move Ema?! I hadn’t even thought her up at the time I made that chapter!)

Anyway, I’m going to play through the entire hack again to try and make sure I’ve caught everything.

I think with v.06.4, I’ve finally ironed out all the bugs. Except for Oscar and Elaine’s stats from Valeria’s story not transferring over. Which thankfully doesn’t make the game unplayable, so I’m leaving that as-is for now.

Hey, I’m gonna make another post. I know it’s a bit early, but I’ve put down the hack for now and I thought it’d be a good time.

No gamebreaking bugs this time! I encountered 0 crashes, so that’s great.

For reference, I played chapters 7-9 this time.

I hope that this stuff can help you improve your hack, and I’m looking forward to trying it again, maybe restarting from the very beginning! I’m really sorry about not being able to continue forward, but in this state I just wasn’t having very much fun. However, I think the ideas presented here are really strong, and it’s clear all you need is a lot of polish and refinement. I’d be open to helping in any way I can, whether it’s more playtesting, or maybe some simple sprites, or whatever. Just contact me via discord, since I believe you’re also on the FEU discord.
Once again best of luck!

Wait, does Louis not have C-Rank lances? He didn’t originally, but I thought I changed that a month or two ago. I guess I forgot to save when I made that change? (Also yeah, that’s not the right portrait. I must’ve changed where the data for certain units was stored at one point or another.)

I’ve found that using Dianne and the walls to your advantage can make the enemy units not too difficult to handle on one side. (Also, not importing the monster classes from Sacred Stones is a deliberate choice. Their minds have deteriorated, but they are still living, breathing people.)

There is a story reason that Edrick’s as broken as he is. And leaving the player unsure of how to win is intentional, though I should probably be a little less vague. I should probably reduce the turn count a bit, though. Waiting 9 turns for Edrick to spawn is a bit too much. (Also, did I seriously forget to write a Talk conversation between Edrick and Valeria? I did, didn’t I. I’ll have to add one in. Maybe that can be how I make the objective clear.)

Yeah… I’m not really gonna make excuses here. This one suffers from “I’m too excited to make Chapter 10 and too frustrated with getting the cool cave thing working right to want to give this chapter enough time to make it good”-itus. I’m honestly considering removing it entirely. (If I really wanted an excuse, I could probably go with something like “It’s a breather chapter”, but that’d be lame.)

Thanks so much for playing as far as you did! The feedback you gave will be a great help with polishing things up! I’m sorry that my early chapters are so bad. I’d like to think the newer ones are actually pretty decent, now that I’ve had time to learn how things work (and finally give the player a Convoy), but I don’t blame you for wanting to stop where you did. You’ve been a big help, and I’m grateful that you played so much of the hack!

I’ve found that using Dianne and the walls to your advantage can make the enemy units not too difficult to handle on one side. (Also, not importing the monster classes from Sacred Stones is a deliberate choice. Their minds have deteriorated, but they are still living, breathing people.)

I did this
dianne died lol she’s very frail
And on the monster classes, that’s fine, I guess, but every enemy being a shaman is still pretty bad imo. You can probably justify them being in different classes.

There is a story reason that Edrick’s as broken as he is.

I get it, but it’s a bit much lol. I don’t think it’s really an issue here since he comes so late and is only available for a little while, but in ch9 it was obviously an issue. I assume it’ll be one in ch10 as well.

And leaving the player unsure of how to win is intentional, though I should probably be a little less vague.

I get the idea of wanting the player to not know quite what to do but it’s something that is unacceptable imo. Clarifying it more and pulling his spawn back would be nice, but you should really just cut out the middleman and make what is meant to be done obvious. Stuff like not conveying to the player what they need to do looks pretty bad, and I think most people would probably give up halfway through the time before Edrick shows up since the game is just telling you to wait, which isn’t engaging at all. The dialogue cues about him coming are nice but it doesn’t really tell me when he’s coming or if he will show up at all, and then when he shows up as a blue unit the objective still doesn’t change, etc etc. I know the feeling of how as a creator something can feel very cool, but I think it’s a sacrifice worth making for the experience.

I think this is the right move honestly.

Thanks so much for playing as far as you did! The feedback you gave will be a great help with polishing things up! I’m sorry that my early chapters are so bad. I’d like to think the newer ones are actually pretty decent, now that I’ve had time to learn how things work (and finally give the player a Convoy)

It was no problem! It’s been a while since i tested a hack so it was nice to get back into it, and I’m very excited to see where it goes. Maybe if the later chapters are so much better, I’ll hack past ch10 and play the rest of the hack from there or something.