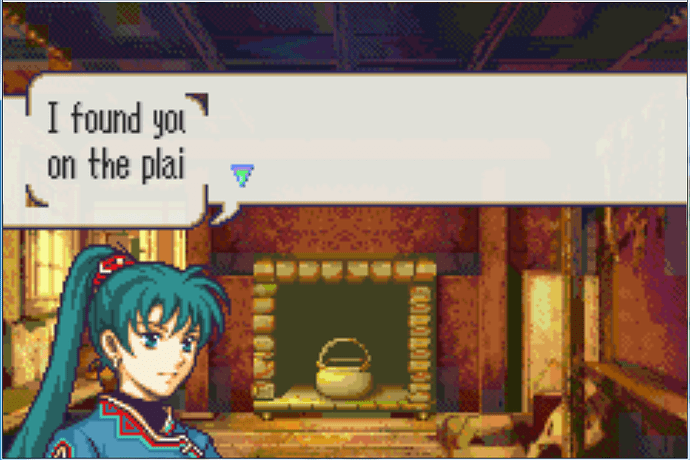 So where’d I go wrong here? The dialogue right before that works just fine, and other instances of dialogue edits also seem to work still, but this whole tree, starting right at that line, totally breaks. Nothing after it can work right either. I’m certainly not a pro, but I can’t see anything visibly wrong with the text through the editor FEBuilder has. I can include the source text below to see if anyone can spot anything out of the ordinary with it, because like I said I’m no pro with this. If that doesn’t help, I’ll include a dump of the event this is built into in a future post. I’m sure it’s probably just something simple I’ve overlooked though to be honest. That sounds about right for me. My general rule of thumb is to always just copy what the vanilla game does and I could have sworn I did, but clearly something isn’t right.

It just doesn’t feel like it’s worth bringing into the FEBuilder thread because it just feels like I overlooked something, or didn’t know about X, etc. I’d kinda prefer not to put something on 7743’s plate if I don’t have to. I’d feel guilty doing it again so soon after they fixed another minor oversight of mine recently.

One (or more) of the lines in that box is too long. Add some line breaks to fix it.

If someone at the same location speaks again, a line break is required after [A].

This is because the person at OpenMidLeft is talking again.
When the same person starts speaking again, the lines are joined.
If the width of the text exceeds the limit, the conversation box will be broken as shown in this screenshot.

FELint has not been able to detect this yet.
That’s because it doesn’t exist in vanilla that people in the same position start talking again.

OpenMidLeft is not required because people at the same location talk continuously.

Usually, when the left person speaks, the right person starts speaking.
Because they are in conversation, they talk alternately.

Conversely, line breaks are not required when OpenMidRight people speak.
A line break is automatically performed.

Well, uh, sorry to bother you again, 7743! I was kinda trying to avoid putting something I felt was an easy fix off onto you, but you’re just too helpful. I really appreciate it though!

As for the issues… That’s all pretty odd, actually. I’ve never edited the source text that I posted, just looked at it. My edits came from using the simple mode to do things and assuming that it would just do everything right like it had when I used it before. But I guess something went wonky?

Running back through it using the simple mode and just remaking this from scratch, it seems like it’s repeating some of the same behaviors that helped cause this situation. It’s still adding in extra [OpenMidLeft]-adjacent codes in places where I guess it doesn’t need to? At least if I’m understanding it right. Either way, removing the extra ones from the simple text field seems to fix the issue with no downsides as of yet, so I might just have to check for extras whenever I run into a text issue again in the future. The text is appearing properly and is being spoken by the right person, so it does seem like for whatever reason, it was just added in by simple mode.

Afterthought edit: I might have found the issue, actually. Maybe. It seems like when you add a new part in by pressing new addition in simple mode, sometimes it leaves some junk depending on what you added it from. I assume because it’s just duplicating the command. When I added a new addition by duplicating a move function, then turned it into a text command, I noticed it left in the [MoveMidLeft] even after I had turned it into dialogue in simple mode. It wasn’t visible in the simple text window, but checking in the source text, there were two [MoveMidLeft] commands when there should only have been one, and the second one was at the start of the new dialogue I added in.

If that is in fact the case, it would explain why I occasionally get an extra command added in out of nowhere, even now. Or I’m just crazy! Could be either one.

As for linebreaking properly, it seems like it’s doing it right this time. No issues with that as of yet.

So the morals of the story seem to be: (1) Always check your line breaks even with helpful automatic tools. (2) Delete extra commands that appear like ghosts in the night. (3) Be thankful when people help you out.

Thanks so much. I really and truly do appreciate the help here, as simple as the problem was. I’m so dang new and inexperienced I wasn’t even really aware of what to look for with this issue, so I probably never would have figured it out on my own.