Making a separate post for this because this isn’t something that I think belongs as part of my review section. Or maybe it does. Idk. (I guess you could consider this a spin-off of my main reviews, which you can find here.

So what is this?

This is me talking about certain things I like or don’t like dealing with when it comes to FE Hacks- and also, I guess the main series in general.

How often will this be updated? Idk. Just like the reviews, it happens when it happens. I’ve also put it in doc format because some of these will be pretty damn long.

You mean like, 1-2 range shortbows, or shortbows that have only just 1 range altogether?

Because I’ll do it if it’s the latter, but I’m afraid I can’t agree with you if it’s the former…

This seems like a neat little series. It would be nice if you talked about siege tomes and especially siege tomes with 20+ uses

Ohh, that’s definitely on the list of things to cover now. Really, though, I can’t believe there are siege tomes with more than five uses… well, actually, I can, but there’s a reason for that.

Finally you know, what all enemies feel like. What they feel like, when they face your army of dodgetanks. Justice I say. Justice for all the generic soldiers you slaughtered in your FE career, Telos!

The vision quest weirdo was indeed a very hateable swordmaster boss. Both gameplay and characterdesignwise.

Truth be told, enemies with high dodge are always annoying, boss or not- that generic enemy Swordmaster in Chapter 10 of The Dark Hour is a good example: He’s a strong foe for the point in the game he shows up in, plus his location (combined with the fact that, I believe, he moves if you’re in his movement range) makes dealing with him an unfun challenge, in my opinion.

Really, the solution for these kinds of enemies is to give them something like a heavy weapon- take that one chapter of Eliwood mode in FE7 where you go get Durandal- the boss there is a swordmaster, and he’s strong too, but the weight of Durandal I believe slows him down to where he’s not overwhelming like Mr. K, for example. Plus, he shows up at a point in the game where you’re supposed to have more than sufficient tools to deal with him, even if you can’t bring that many units.

Here’s another one! Today, I, Telos, will be talking about… Shortbows!

You can find the doc with my thoughts by clicking here.

A shortbow is an actual literal thing, a smaller bow as opposed to a longbow which is… long.Typically used on horseback where a longbow is too cumbersome, or maybe if you need to shoot in cramped spaces.


I don’t see any issue with 1(-2) shortbows because, as you’ve already said, an archer is generally not suited to close combat so the player won’t want to do it much regardless. But it’s still nice to have that option if you want it and literally. Every. Single. Other. Class has access to 1-2 range in some capacity.

But i also agree with you that better range is the best way to buff bows. This is purely anecdotal, but when i played Sacred Stones with 1-2 range shortbows and 2-3 range on all other bows, i barely use the shortbow because the 2-3-range gave archers something to do that wasn’t just “be a worse handaxe/javelin user” (which, let’s be honest, is what archers otherwise are in gbafe).

I didn’t know that was an actual thing, really, with the shortbow. (Though I guess it makes sense if you think about it.).

I’m generally not a huge fan of the short bow/longbow argument as a whole. If 1-2 range bows exist, they should be relatively pricey and limited. As for 2-3 range bows, they’re fine as long as they’re just a few select bows, such as the Longbow itself. Hacks that give the entire bow weapon line 2-3 range can be very unfun to play due to the fact only an archer can counter an archer at that point, making the class dynamics more stale and limited.

The reason why I don’t like the argument is that an archer’s biggest problem honestly isn’t regarding their range in Vanilla FE, IMO - that one is fine just as it is. It’s about the staleness and lack of variety in the weapons they wield. Bows have no weapon triangle (therefore also lack reavers or, in some hacks, gem weapons), uninteresting stats, and lack special effective weaponry (since all bows are effective against fliers already).

Our solution to this in LoA was to make shortbows 1-2 range, longbows 2-3 range, and have pretty common iron, steel, and silver shortbows thrown around. If using a shortbow at 1 range or a longbow at 3 range, there are fairly substantial debuffs to attack, AS, and hit rate. I think it works pretty well, and I don’t think anyone’s complained about it.

Hacks that give the entire bow weapon line 2-3 range can be very unfun to play due to the fact only an archer can counter an archer at that point, making the class dynamics more stale and limited.

Wow i do not agree with this on a single point. Any “class dynamic” that exists in most fe is “archers get dunked on by every class with an attack command” and that, if anything, is “stale”.

Hell you can dunk on archers without even having an attack command by putting four clerics or something around them and then they can’t do shit. 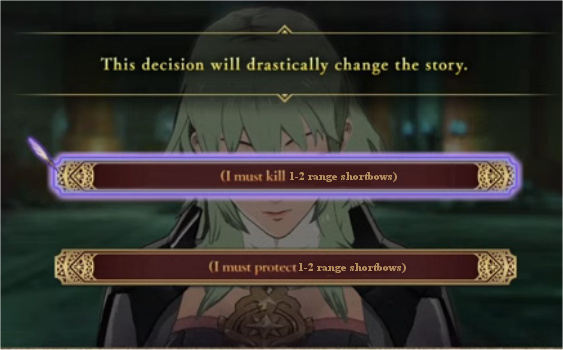 If this is the response to the shortbow post, I shudder to imagine what it’ll be like once I go into Siege tomes…

I’d really like to know what you thought of the Swordmaster doc, actually…

Good level design is ultimately what it’s about.

There is no law stating that Bows must be 2+ range, or that Pegasi must be weak to bows, or that Brigands must charge the villages. These are simply tropes that we’ve come to expect from playing fire emblem games. It’s your own hack: you can stray from these tropes and still make a good game. However, doing so puts you at a disadvantage.

When players expect a sword user to be weak against lances, but for some reason in your hack swords are weak against Throwing Knives instead, you alienate the player and force them to re-learn gameplay aspects.

I don’t think it’s quite so drastic with 1 range bows. Just consider what tropes you want the player to have to relearn and which tropes you’d rather use to your advantage. Balancing familiarity with novel mechanics is the goal.

I agree, honestly- and that’s honestly what I like to see in hacks- a mix of novelty and familiarity. Too much of one honestly ruins the other in my opinion.

… and I also admit I might’ve been drastic in my opinion of one range bows.