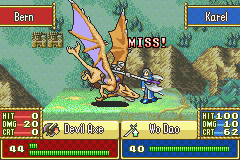 Does somebody have the full sheet?

I’m too lazy to rip the animation XP

even though the new feditor gives you the individual frames…?

even though the new feditor gives you the individual frames…?

I haven’t opened the Class Animation Manager in a while, I wasn’t aware of that.
I’ll do that right now, thanks.

Ok, I tried to dump the frames, but it doesn’t rip all the frames of a custom animation, it just gives you the attack frames: So… I still need the complete sheet…

what frames do you still need? the crit is exactly the same as the lance crit(and you can rip those ~3 frames with animget)
If you’re referring to the handaxe that’s a different animation(a different index)

No it does miss frames; I remember because I asked yeti to rip one of my old anims after I lost my stuff and some frames were missing

I guess check to see if you have the latest version? Maybe this problem was addressed @temp already

A lot of the mounted animations native to FE6 will use repeat frames, so it would be pointless to re-rip frames that are already there. The script should have repeat image names throughout the critical animation modes.

You realize he’s talking about a custom animation right?
Aka not native to any game

Will this do the trick?

Apologies if the animation isn’t supposed to be posted in public (I’ve never used it since I never got permission); I’ll take the link down immediately if so. It doesn’t seem very harmful to post a simple link to anything nowadays given that it can all be ripped by FEditor now anyway.

edit: derp, it also appears to be on the Serenes resource thread. [insert proverb about looking everywhere but the most obvious place]

That animation uses a vanilla animation as a base, so it should most likely follow the same rules.

what frames do you still need? the crit is exactly the same as the lance crit(and you can rip those ~3 frames with animget)

I’ll rip the crit and dodge frames, those are the missing ones.

Will this do the trick?

I’m looking for the frames, not the animation itself, I just want to make a Dracomaster (Using lances and axes) with a different rider.

uh you’re not making any sense
this animation is not an edited sheet animation that was re-inserted
it was inserted frame by frame with a script(so it follows none of the rules as the animations that exist in game).
idk how to explain this any clearer other than it’s treated like a custom animation

No it does miss frames; I remember because I asked yeti to rip one of my old anims after I lost my stuff and some frames were missing

Just wanted to pop in and mention that this only occurs with animations compiled in FEditor (read basically all custom animations) made prior to any additions like frame dumping.

I’ve sussed out a solution and updated the Animation Creator to remedy the issue for dumping frames, but I need to do some further testing to make sure it’s ready for a public release. I’ll add the details to the FEditor Adv thread once it’s all finished.