I wanted to make more original character splices so I used this oc generator to make some OCs for me, however it’s got me wanting to do more with the characters than just giving them a face; so now I’m considering using them for a story and possibly make a hack out of it too (a loooong time in the future, if at all). This thread is meant to be an ideas/concepts dump (that’s fine rules wise, right? Do let me know if not!).

Suggestions very welcome for any fixes that could make these look better! I’m a complete beginner, so I’m not above even the most obvious tips :’)

Lord 1’s dice rolls gave me dark blue hair, pink eyes, and undercut/balding. I found a grand total of one singular existing undercut in vanilla portraits (Barthe’s, and it looks awful on just about everyone else’s head), so I went for balding.
ETA: nevermind, I went for both after all since he was in need of a younger version! Made an attempt at a shaved undercut, which was kinda fun actually. 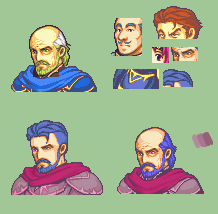 I’m trying to keep a cohesive color scheme for each kingdom (even more so for family members), but I worry it makes things too samey so I might change that eventually.
He’s lord 2’s grandfather; late 40s in the prologue, early-mid 60s after.

For the Jeigan I rolled the class as well and got manakete, so, yeah. I’ve got a few solutions in mind to make it not broken, and it might be interesting for the story, so why not? For hair I got light blue and long (I cheated a little since Pent’s hair should count as a ponytail, but whatever), and for eyes turquoise. 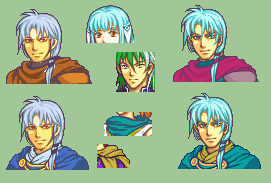 In the prologue he has a Lord-provided armor and cape in the local colors, the second outfit (and the undershirt in the first) is from his region. Also I’m getting a lot of mileage out of Eliwood’s wardrobe.

Regular manakete, not the Jeigan brand: 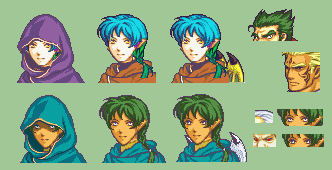 Rolled dark green hair with short braid/s, and white eyes. She’s the one who changed the most from the initial draft, which was your run-of-the-mill baby dragon.

Lord 2 was assigned light brown hair, pink eyes, and a long ponytail, though I ended up ditching it after the wardrobe change. Speaking of, can you tell I like wardrobe changes yet? 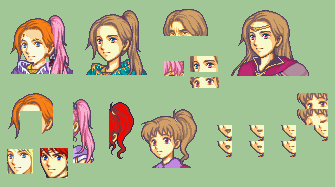 Kid version is for the prologue. I’m figuring things out as I make these, and I’ve started brainstorming some plot and worldbuilding, but it’s still very much in the stream of consciousness phase. It’s a start, though! 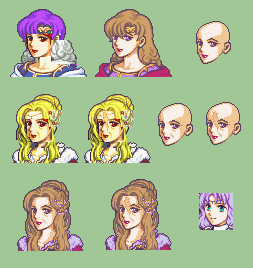 For an NPC, her role is shaping up to be pretty prominent. I may or may not decide to make her playable, but it’s up in the air for the time being!
Edit: fixed a mistake in her hair

Xmas cavs 1&2: first rolled green hair (bob cut) and brown eyes, the other dark brown hair (“exotic”, whatever that’s supposed to mean) and dark purple eyes. I’m ngl these are pretty sloppy (green cav in particular gave me a lot of trouble), I’ll go back to them in due time to clean them up. 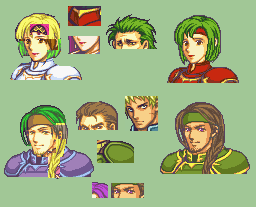 I was thinking of having them be a married pair, but we’ll see. They won’t join immediately, so a pre-built A support shouldn’t be a huge deal by the time they show up.

I’m not dead yeehaw. I made this way back in December and have since been busy with my classes, so I’m a bit fuzzy on the details, but the dancer rolled red hair (short) and green eyes and here’s what I did with that.

Fwiw, for the undercut you could take the current bald guy and splice the top part of someone’s hair on top by erasing everything but the top strands, if that makes sense. I’m at work right now so I can’t demonstrate unfortunately

No need, I got what you mean! Thanks for the tip, I’ll try it out tomorrow. Someone’s getting their weave snatched

also if you’re having trouble with frames, like if you can’t transfer frames from the source splice because of issues, I can do the frames. same with minis but the minis sometimes take longer and I’d request some sort of compensation

(you should just follow the tutorial in the repo for frames tho, and I can do a writeup on some of the more subtle parts/conventions that I’ve noticed in vanilla mug frames)

(is there a tutorial for minis yet lol, someone should make one. possibly me)

final edit: under hood shading should be a mixture of manual antialiasing and just using colors one shade darker, you might have to do the mid shade for contour of the face in some cases. manual antialiasing is probably one of the main things one should grasp as a splicer to elevate one’s art, and tbh I have no idea how to teach someone this technique other than “stare at the jaw of mugshots from other games for a few hours” because that’s how I learned lol

I think I got the hang of it! I won’t get around to making them until I’ve finalized the colors, but I should be fine on frames. Blinking frames are still a little iffy since FE6 eyes means I can’t just copypaste them, you can definitely pick out the ones I made by hand since they’re pretty bad, but practice makes perfect I guess! As for minis, until now I’ve just halved the size then cleaned them up a little. When I’ve got more free time I might try splicing the minis too, but atm I’m just too lazy to :’) a tutorial would be cool if you ever get around to making it!

Funny you should mention that, since I just noticed (when making the manakete girl) that I had completely forgotten to adjust the antialiasing on…just about everything I had done so far. I tried it out on the Eirika bangs I gave her (mostly copied from the source, tweaked just a tiny bit to adapt to the new face) and it looks so much better already! I really need to learn how to do it properly.
Thanks again for the help!

I tried out both the undercut and hood shading, if you don’t mind (totally fair, no worries) could I ask for your opinion on them?

they look pretty alright as far as things outside of techniques specific to pixel art. you’re pillow shading, is the problem. To avoid pillow shading you want to add the manual antialiasing shades in a staggered manner, preferably in a way that makes the outline suggest the form of the object in the small space you have.
Also, for a shaved/fade version of the undercut you can probably take the original guy hair and splice multiple layers of hair on top rather than just glass/puzon, so you can cover the baldness. the other layers can be taken from dudes who have hair that goes that low lool. but I understand if you’re trying to avoid a lotta long bangs on the guy. in that case, the contour of the skull is off - shading it that way makes it look like his brow ridge goes all the way there. you’d actually be better off without shading most of that section of the head, weirdly enough

your second lord looks pretty cleanly done, I can’t really pinpoint what’s slightly off bc I’m on my phone and the screen is small

Edit: finally had some time to do this :’) I updated the pics in the OP!

Ahh, I thought I might be- I read up on it on a few tutorials and thought I had it figured out, but I guess I still don’t have a clear idea of how to avoid it :’) I’ll try and touch up the shading as soon as I have some time to myself! The “suggest the shape of the object” thing actually makes it a fair bit easier to understand, here’s hoping I really got it this time.

Thank you so much for all the tips

I was going to try dithering (I think that’s the term?) for the shaved part but your method is definitely a better way to go about it. For the second lord it’s probably the face/eye placement, I used Cath’s head so the hair would fit properly but I slapped Lucius’ face on there as a unit, instead of placing the eyes/nose/mouth individually. I’ll try moving them around and see if it looks more natural!