I don’t really know if this is a TSA glitch or not, but that’s what my gut’s telling me.

These are inserted with @circleseverywhere’s inserter, and this happens with multiple spells.

So whenever a custom spell plays, other graphics are screwed up. As seen in the gifs, flux is messed up, Seth’s sagey blue thing doesn’t happen the second time in one, exp bars don’t show up, the level up is messed up, and the text box in O’Neil’s death quote doesn’t show up.

Check the value in BG1VOFS. I don’t think it has any relation to TSA.

Err…
Where exactly could I… uh… find that?

I’m sorry. I haven’t meddled in RAM much at all yet.
I’ve gone to the offset there in the RAM, but I don’t know how to make sense of it.

That register controls the Y position of the BG1. I guess it may be messed up from your screenshots.

When I start playing the spell, these become checked… 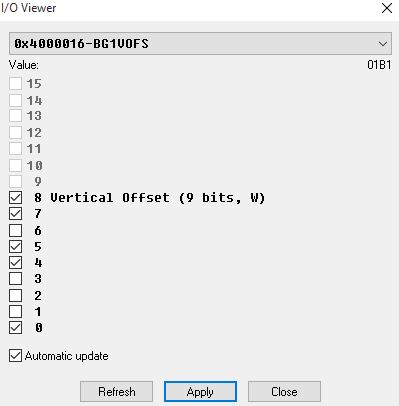 They don’t with a vanilla spell.

Is this what you mean?

So how can I fix this problem though?
Also, when I insert the spell in FEditor, it doesn’t have this problem.