This is technically an SRPG Studio game and not a hack, but I’m not sure what else to categorize this as.

Anyway, for some time I had this Written Works project on Serenes Forest called Fire Emblem: Ascension where I was presenting an original story of mine as a hypothetical fangame, including the mechanics I wanted to appear in it since I found learning how to hack intimidating.

And then SRPG Studio came out in English, and everything changed. I was amazed at the sheer potential it had as an easy-to-learn fangame making tool and knew at that very moment it was what I was looking for all this time.

So here’s some of what you can expect to see:

Spreadsheets (all subject to change):

So for now, have some screenshots: 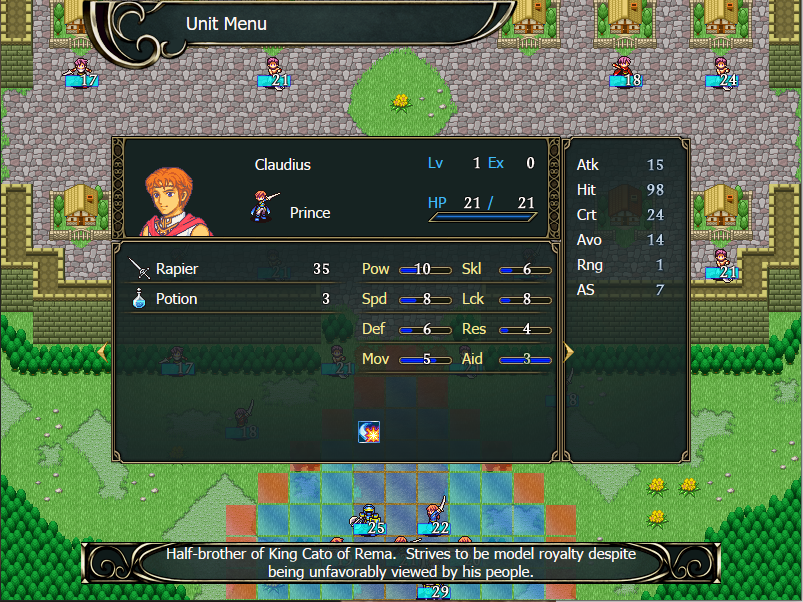 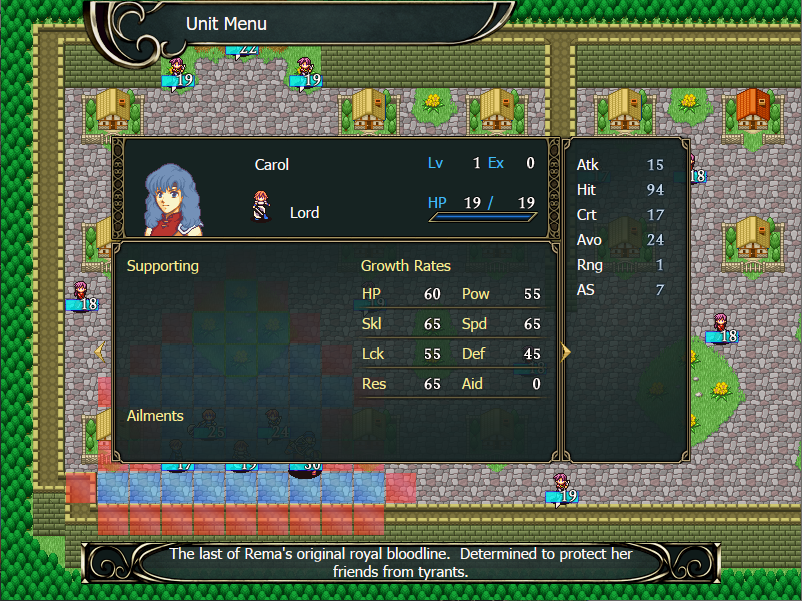 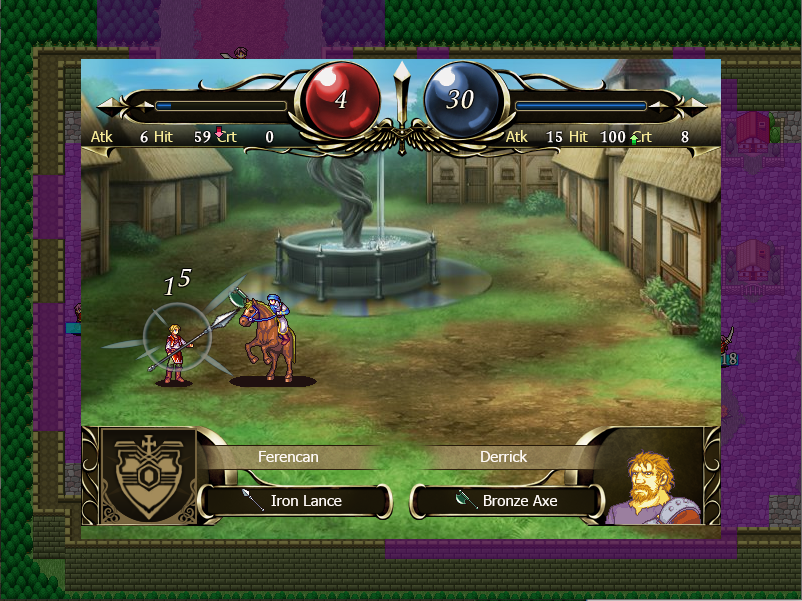 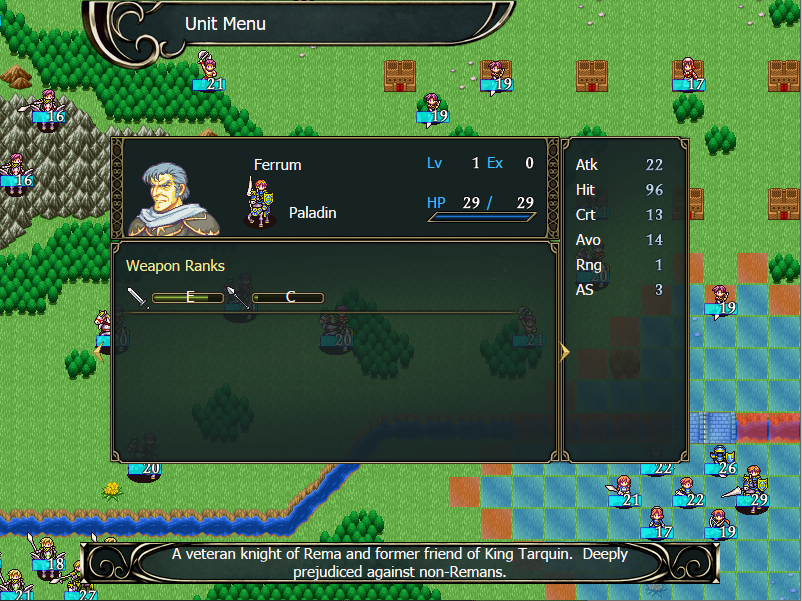 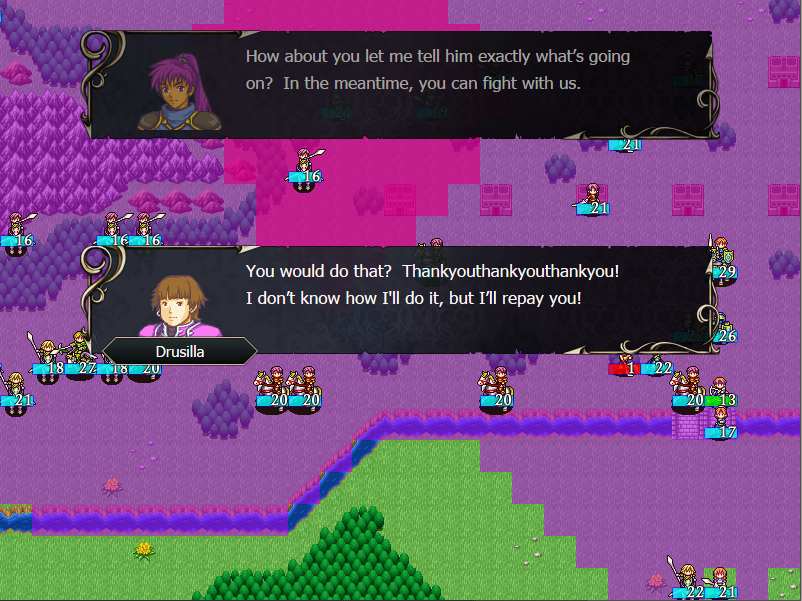 Bows (all of which are 2-3-Range) and Fates-style Daggers, which are triangle-independent

Yes! I remember a time when I came up with this idea and everyone thought it was dumb, and now all the dudes recognize it’s the best way to make archers viable!

This project looks fun. Can’t wait to give it a try, and I hate everything.

I’m interested to see where this goes. I think the graphics stand out to me as the most out-of-place but I’m sure things like the tilesets and map sprites could be changed rather easily. I imagine you plan on changing the portraits at some stage as well as they don’t blend well with existing graphics.

so expect to see a lot of low-percentage critical hits

FYI the two-RNG system applies only to hit, not crit, so the critical hit rate is a true representation (and always has been) of chances

Agro:
I think the graphics stand out to me as the most out-of-place but I'm sure things like the tilesets and map sprites could be changed rather easily. I imagine you plan on changing the portraits at some stage as well as they don't blend well with existing graphics.

If I recall correctly, someone made some modified GBA tilesets compatible with SRPG Studio. If I can find those, I might be able to replace the default ones with them (because I’d like to keep the GBA-style portraits, since I don’t think I could draw my own portraits of sufficient quality, yet also don’t want to use the SRPG Studio default portraits).

Well, here’s the flipside: you can commission ANY artist to do portraits for you. Since they’d just be small pictures of head + shoulders, I think most artists would be willing to do something like this at a good rate for you. Spriting is definitely more difficult than hand-drawing. I wasn’t saying to use GBA tilesets either; there are probably heaps of free-to-use tilesets on the internet specifically for projects like this.

I would prefer not to spend any more money than I already have buying SRPG Studio. So commissioning other people to do the portraits might not work out for me either, especially taking into account portraits for various NPCs and bosses.

I did find some other alternate tilesets (like an indoors one), but couldn’t figure out the correct way to use them. I may keep looking.

Honestly I’d rather not worry a whole lot about the graphics aspect of things.

v1.0 is now available! Give it a try and tell me what you think!

Somehow the opening events of Chapter 5 got messed up so that Cato turns into Claudius and is unable to kill Duncan like he should, making the chapter pretty much unplayable. So I guess you’ll only be able to play up to Chapter 4 right now.

I’m going to need to fix that ASAP.

I think it’s been long enough now that a progress update is in order.

I’m still trying to come up with ideas for every Support chain to be available in v1.1. As of this post I currently have 18 Support chains left to figure out before I can start implementing them. On the upside, implementing them should be relatively fast since by then I’ll have a better idea of where exactly I want to go with the conversations.

In the meantime, I’ve been continuing to polish the game to a high level of quality. I’ve gotten some VERY helpful feedback from the /r/SRPGStudio Discord server about how I can improve it. Many of v1.1’s changes include level design and quality of life tweaks, such as visible Triangle advantage indicators and a page on the Unit Menu for growth rates.

If you’ve played all the way through the current version of the game and have some ideas for Support chains, again, please let me know in a PM and if I like what you have to say, I’ll add it to the Supports spreadsheet and give you a contributor’s credit. If you want me to get this thing done and out faster, you can help!

v1.1 is now available for you to play! Check it out, especially if you haven’t played earlier versions already! Think of it as an early Christmas present to you all!

First off, v2.0 is now available! It’s got 15 of the planned 29 Chapters and a ton of new characters! (Their Support chains will have to come later, though.)

Second, the project now has its own Discord server that you can join! It should be the best place for you to keep up with the game’s progress and provide feedback now.

Third, and possibly most importantly, FuranSuwa has decided to lend their services and create new halfbody portraits for the game! It’ll probably take a very long time to get this new portrait system implemented, but what I’ve seen of their work looks highly promising.

Check out FuranSuwa’s new halfbody portraits for Claudius and Carol! 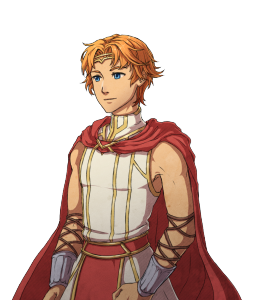 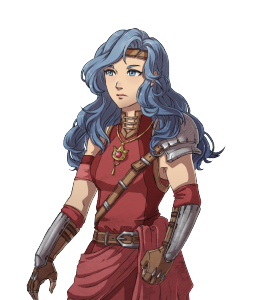 They probably won’t see their intended full use yet (I’d need everybody’s for that), but they’ll still be visible in the next version under Extras!

Only thing is… what’s going on with her hands? She looks like she’s supposed to be holding a horse bridle or something, but isn’t. Her right hand (our left) also looks extra weird because of this.

Small nitpicks though. These are super cool!

Yup. If you think Carol is waifu material, wait until you see Elma.

More of the portraits Furan has completed so far:
(Generic Myrmidons)

Careful there. If you don’t like Tharja, chances are you probably won’t like Petricia very much, either. Though I did try to make her a better character in that area. You’d have to read her Supports to see if I succeeded.

Why would you ever intentionally make that type of character