This might kinda sounds like a bad Idea, but what is your opinion about a lord that is also a Jagen? (Or at least like Oifey?)
One idea I had is a story about an old trainer who wants to find a student to pass his skill into, similar to the Kung Fu chapter in Live A Live.

That’s what Sigurd is.
also ew, distinguishing between Jagens and Oifeys, gross

It can work if you design around it well. Think it can be a fun premise.

Yeah, we have that kind of pre-promoted lord, but he got BBQed.

Definitely not a bad thing; if story-gameplay integration is a thing, most lords would’ve been prepromotes (New Mystery Marth, Eliwood/Hector, Chrom, Byleth) and I think that should’ve been the idea if devs were to make a game where the lord is powerful (and build the enemy around the idea of the lord being prepromotes as well to balance it) as opposed to just make them a somewhat good unit that grows better than most others from level 1 unpromoted or just outright strong without explanation.

i have seen once, he died and restructured as a final boss ,holding a super heavy lightning rod to fight us.

I thought about doing this for making a Three Houses style hack. I never got far, I just planned some basic ideas and focused on other things instead.

You’d play as a pre-promoted teacher whose class you got to choose at the beginning of the game along with which group of students you wanted to teach. There would be a timeskip just like in 3H and I thought it would be a good idea to give the teacher Aptitude (+20% to all growths) at that point so that they wouldn’t fall behind as a mandatory deployment.

But yeah, like people have said, it could totally work.

I dont think its a bad idea at all. One of the two protagonists/lords for my hack is gonna start as a higher level tier 1 unit.

FE2/FE13 actually has a pretty clever workaround- Alm isn’t a prepromote, but almost everyone else in the starting party is a villager, which makes him look more experienced by comparison.

Besides Siegfried and Sigurd, Ava from The Road to Ruin is a good example for Jagen lord

Technically Celica is prepromoted as she is a priestess lol. Though it’s her exclusive version. 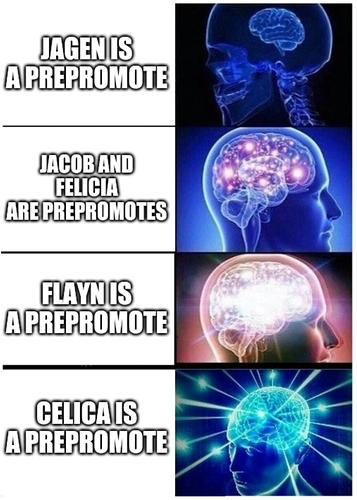 Welp, Thanks a lot for the answers. Turns out that not only it’s actually a good Idea, but they already exist in the from of Sigurd and Siegfried.
Although I wondered if I made the lord a Jagen, would it be a hassle for players to be forced deploy it in the lategame? Considering some people hate useless lords like Roy etc.

don’t make them useless in lategame then

Setting aside the occasionally vague line between Oifeys and Jagens, there are ways to keep a Jagen viable in the lategame. If they start with multiple high weapon ranks they have a versatility that most units won’t be able to naturally attain. Skills or Prf weapons can also give them a unique utility to keep the useful.

Alternatively, from a narrative stand point it might make sense to have the Jagen leave the team at some point. It could be a fully fledged second generation, like Sigurd, but it doesn’t necessarily have to be so drastic. The main character being someone who is already very experienced is really outside the wheelhouse of the average Fire Emblem narrative, so you could probably make something really unique with the concept.

Making the lord have such an important role as the jagen or a healer is good, since it ensures the player, no matter how badly things go, will always have the lord and their use cases. We all say Jagens are good but the fact that you can lose them early can easily screw over players. Like losing Marcus in FE6 Chapter 4.

it was used in genealogy therefor it’s bad

in all seriousness though as long as the lord doesn’t become completely useless late game (ie rescue utility, hp sponge, able to use better weapons, etc) I think it can work