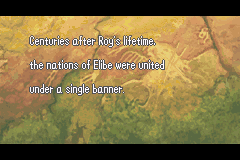 So I just got done playing through Fire Emblem 6 The Binding Blade. I got the “bad” ending since Zeiss got killed. I read this and thought: What if this is a possible sequel to FE6?.

I remember too that it says that Roy’s descendant arose to fight a new evil. So my headcanon for the bad ending is that after years of peace Idunn comes out from hiding. Then Roy’s descendant follows in his ancestor’s footsteps and seal this new threat. Somehow this descendant manages to bring all of Elibe into one nation.

In conclusion, I personally think this is a cool concept in general and I have yet to see anyone else talk about it. Hey for all we know Roy’s descendant might have some decent stats. So what are your opinions on this Elibean Nation?

It’s always been a concept that I’ve been interested in seeing. I’ve seen the bad ending on video, but never actually got it myself.

So my headcanon for the bad ending is that after years of peace Idunn comes out from hiding.

but the real ending is that she gets restored to her divine dragon status so uh
nope, gonna have to get another baddie

But why would the real ending be relevant if this branches off from the only other ending.

seems nice but it might seem hard to sort of make a full game out of something that is probably just roy’s people just fighting a bunch of dragons. I don’t really see how a full on campaign can work when the enemy is just Idunn and her war dragons. I doubt she’d ally herself with any humans other than Zephiel so… Yeah it might be tricky to make gameplay/story interesting when theres only 2 factions fighting against each other

Well it could even be a whole different plot just taking place after the events of fe6.

Yeah that’s true but I imagine Roy’s descendant in a future Elibe fighting against Idunn. A future Elibe after the war with Bern allows for many possibilities. It did say long after Roy’s lifetime.

(I think it’s bad, reusing villains always is trite and a story retread but with children as if a plot echo is always going to be boring if nothing else.)

I like sequels and seeing characters I like aged up as much as the next guy, but it takes more than that. You have to introduce new characters, villains and plot elements or else it feels incredibly stale.

this already exists
its called DDOP

An FE6 sequel would always be better than FE7 as a prequel. Change my mind. Anyways, who would be the villain in that theoretical sequel? Bern cannot be it or else it just becomes lazy writing. And Etruria again would be boring. Maybe extremists from the church since their original objective was to keep dragons out of this realm and that never changed in the bad end. Maybe people who are racist against dragons and some randos who want power yet again as sidevillains.

Could actually be an interessting hack or fangame if anyone is up to that. I would personally rather adapt Ais story as a prequel tho since that is preestablished history of certain characters existing and than failing to stop Bern in the end. It would be less of a gamble which mugs would be nessesary for the project and which would not be.

Its says in the epilogue of Fe6 that all of Elibe would eventually become one nation. It would be interesting to explore the culture clash and inevitable conflict. It would be easy for nations like Bern, Lycia, and Eturia to unite. However, nations like Sacae or Nabata would be very resistant to such a movement. It would kinda be like seeing how Valentia was in Awakening. Gaiden setted up the perfect happy ending for Alm and Celica. However we learn that the nation fractured, and Alm’s descendant became like his father Rudolph. Not going to lie I would like to see how the Scouring would fade even more into legend. It was shown that most people didn’t actually believe in dragons in FE6. They are surprised that the “myths” are true. FE6 is my 2nd favorite game of the franchise, but has the lingerings of the Kaga era. (why are armor knights so bad) A true FE6 sequel seemed like a chance to fix some of FE6’s biggest mistakes. (Like Roy) Yet they decided to make FE7 which is pretty mediocre in terms of gameplay.

I mean, armorknights as a class are always bad. just that some earlygames(HHM and fates conquest)are demanding enough statwise that a high def-unit will almost be nessesary.

Yeah but we got Bosswin in fe7 and Gilliam in Fe8. They were pretty good armor knights. Especially with Gilliam and his Great Knight promotion. What do we get in fe6? Bors, Wendy, and Barth. Hands down the worst armor knights in the whole series.

So, what happened between FE6 and FE7 No one want to know that?

Play Elibean Nights lol. I might actually release a fixed fanversion for it eventually since I want to make one anyways for a translationpatch of it I want to make(Of course as a patch that requires you to already have the original hack on a rom. I don’t have Archs approval and I ain’t no thief.)

I personally like to keep it vague y’know? I think the effect of a timeskip to be more effective when there is a long gap in between. That way you can see characters grow in between the years. I LOVED how FE4 did this with its timeskip. You see how the legacies of the 1st Generation carries on. My personal favorite from Elibe is definitely is Zephiel. The last time you see him in FE7 he is happy and hopeful. (Unless you got the full ending) Then comes FE6 with him being a complety different person. Then you’re left with questions. Questions that are answered. The only glaring problem is if a PREQUEL is made. Its naturally going to retcon a lot of elements. We still haven’t perfected this. (For some reason) So why not make a Midquel? Its really hard to make a story that can bridge all the connections between two stories. I respect Arch for some of his ideas in Elibean Nights. Killing off Raven, Showing Hawkeye’s death, and the journey of Karel. He killed off some important characters in not so savory ways, but it seems… more realistic. (Still disappointed we didn’t get a Gonzales story though

Even retconny prequels can be good if they are at least made with the honest intention to further the original story. In the case of FE7,that is only really the case with hectors character and who roys mother is,as everything else from lore to finer details is either a bad type of retcon or just makes no sence internally in FE7 itself. It just feels as if they had no idea what to do after ripping off kaga in FE6(still good game storywise) and just did whatever at that point.