Greetings, FEU! After a year or so of restructuring and reworking, I’m proud to present the revival of my romhack, now (informally) titled OC Emblem Redux!

I started over from scratch, this time using FE8 as a base, and overhauled the gameplay, visuals, music, and script so much that 95% of the (admittedly crappy) original has been shredded down to its last atom. Thanks to planning this out a lot more orderly this time around, I now have a general outline planned!

OC Emblem’s features so far include:

And here are the credits as well! (Everyone is credited only once for convenience. If you made something used and seen in-game but I forgot to put your name anywhere in the credits, please notify me about it in private on Discord or here so I can rectify the problem.)

That’s all for now, so if you have any feedback or thoughts please let me know! I hope you can all enjoy my personal passion project of a romhack!

Is this the pogger

yes very much so, good sir

This looks amazing! The color scheme is probably my favorite I’ve ever seen in a hack(I am alittle biased towards purple and blue since that’s my favorite color combination) and I’ll be rooting for the completion of this as well! Good luck my friend as I know it’ll be good(I’ve also played a PME that you’ve done in the past so I know that this gonna be a good one).

Hey all, thanks for the support so far! I’ve updated the patch quite a lot over the past week or so, since it was mostly polishing and little fixes here and there, I’ve used the same link. I hope you’re all enjoying the hack so far!

Part of the hotfixes include: Bugfixes, rebalancing, and aesthetic weather! Chapters 1 and 4 both have snow you can enjoy without having to trudge through the sloggy reduced movement!

Hi guys, new update is out, including Chapter 5 and tons of early chapter polish. The original post has been updated with the link to the new patch.
In the meantime, have some screenshots: 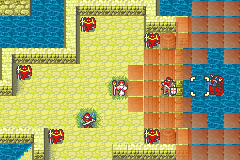 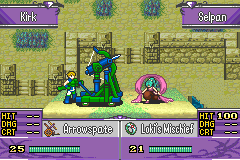 And to celebrate the hack’s planned playable cast being finalized, here’s a tier list maker for some more fun: https://tiermaker.com/create/oc-emblem-characters-final-roster-tier-list-1429345

And don’t worry, the rain is just aesthetic. Enjoy the chicken chapter!

Chapter 6 is here! Did plenty of things behind the scenes to get this chapter up and running. Enjoy the game!

I’ve uploaded Chapter 7. I was gonna wait until I finished Chapter 7x to post a new update so we’d have the entirety of Act 1 released, but I kinda got tired lately. Hope you all enjoy!

Bump. Chapter 7x has been out for quite some time. I’ve been doing tons of QoL changes behind the scenes as well, such as implementing Tequila’s text engine rework and using it to make dialogue flow a lot better and adding sound effects for fun. I’ve condesned the OP for a much more appealing experience. And with that, Act 1 is finally complete. Act 2 coming soon, but I’d like to get some supports done before then, if possible.

Chapter 8 is live? Has been finished since last week! Thought I’d wait til the FEE3 video release to announce the update and bump the thread.

Following this can’t wait to play this

You could try out the current patch to see how it’s going so far! As of now, it goes up to Chapter 8 with three unlockable side chapters as well.

Hey everyone, not sure if anyone’s still interested in the hack, but Chapter 9 is out now! It’s the biggest chapter so far in terms of unit count, and I’ll let the image speak for itself: 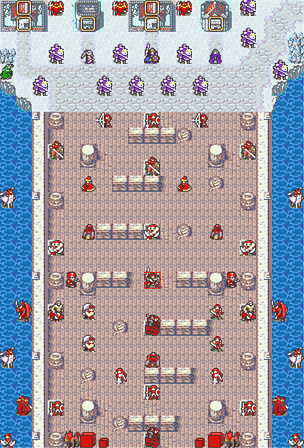 JEBUS this map is big. Ima probably play the hack again after chap 10 releases but still keep up the good work.