Need someone to fix portrait

I’ve redone this portrait about 1000 times for FEditor, but it always messes up every single time. I spent weeks getting this all together and now this dumb portrait is the only thing in my way. It would be extremely appreciated if a kind soul would be willing to make this portrait in an acceptable format for FEditor. If it helps, he was made using Pent and Roland.

An example of the FEditor format

how is it messing up, and how are you formatting it? which program are you using? it’s well and all for us to do it for you but it’s going to happen again unless you learn to do it right

I happened to get the issue fixed after pulling an all-nighter. To help make it look natural, we were overwriting an already existing portrait with what we needed, but it wasn’t matching up. We just changed the portrait to something that looked more like him from FE7 and it worked.

so you didn’t use usenti at all?

My guy who does it isn’t very familiar with usenti or any Fire Emblem hacking tools, so he just uses other applications and his programming knowledge to do it. He’s done a pretty good job so far. Everything looks natural.

well that’s why it wasn’t aligning correctly and wouldn’t work with FEditor, because if you want a portrait to be properly aligned in FEditor, it has to be 16 colours or less and the frames have to match up with Usenti’s 8x8 grid.

Oh yeah, we’ve been doing that so far. This one just didn’t work because we were having issues overwriting the previous portrait, but it looks fine now. 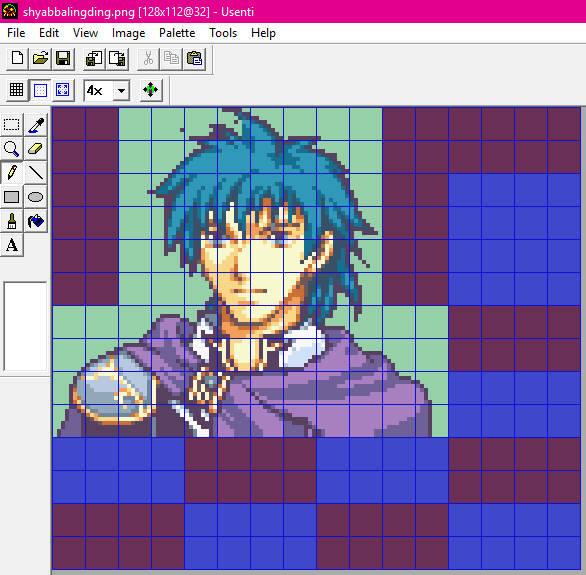 Mug also has more than 16 colours, will be an issue.