My ROM got bugged and I need help

I’m not quite sure what caused it, but someone playtesting a hack I’m working on told me that everything got messed up, and I went into chapter 1 and figured out exactly what. 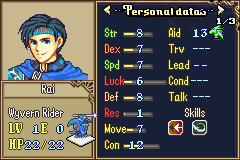 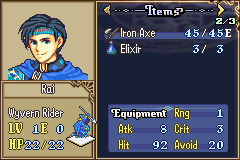 As you can see, the attack power of this unit isn’t calculated properly, 8 Strength + an 8 might weapon SHOULD be 16 attack. But its not.

I used Rally Spectrum with the troubadour and that didn’t change it either, so for some reason strength isn’t being used in damage calculation. 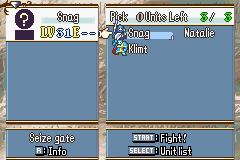 I’ve seen this before. If you’ve gotten these results from inserting animations incorrectly or things of a similar caliber, I’m afraid to say your ROM is corrupted and you should start over unless you’re using buildfiles or have a backup. 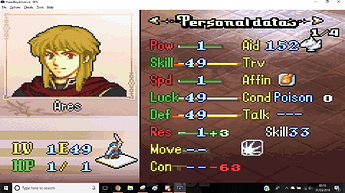 Your thing is nowhere as close to being as bad as mine once was, and I imagine it’s POSSIBLE someone who really knows their stuff could try to fix it, but with issues like those there may be more under the surface.

Ok so, I figured out what went wrong

The ROM had an older version of the Skill System on it, and when I went to update it I didn’t uninstall the old version, so that messed everything up.

Now I’m gonna have to redo a ton of work

If you send a report 7743 may be able to help update it without having to redo the work.