My First Project, an FE8 PME

Some dialog is bugged, and will overlap. I’m not sure if this is because I’m hitting A to mash through it, or if it’s a speedup thing.

Hello! This is perhaps due to having too much text on a single line. Splitting text between more lines should help with that.

While I’m here may drop a bit of a character. Will likely finish tomorrow unless I forget. Need sleep.

Who they are replacing: Rennac
Portrait:

Character Description: A blind Bishop of Grado. Although she can ‘see’ with light magic.

Definitely not Shiori, nope. …When making her originally I wasn’t thinking Midnight Sun’s Shiori, just that light = sight in a sort, so it’d be a fun concept to play with, hehehe.

Ended up finishing her up anyway instead of sleeping. Should’ve seen that coming. Thanks brain!

For a bit of character, if people make jokes about her blindness and some are worried she takes offence, Etro’s generally the first in line to make jokes out of her own blindness. It doesn’t really bother her at all especially due to being able to rectify it somewhat by using light magic to recreate a very rudimentary type of vision.

Maybe being split from the other two is less Rennac shenanigans and more just ‘couldn’t see, got lost’.

I’d need to replace a promo’d unit with another one, but maybe I could just toss a guiding ring in like… a chest somewhere. You guys do have two thieves lol.

Hmmmm… Not being a growthy prepromote about kills the weird niche. What to do, what to do…
Maybe she’d replace Rennac then…? A bit late and possibly useless by that point, but being a healer is always appreciated.
I’ll probably try to think of an unpromoted healer tomorrow, for now editting Etro for Rennac stuff.

Let’s replace the Demon King with the true most powerful entity in Magvel… average stats level 20 Seth with an inventory full of Javelins. 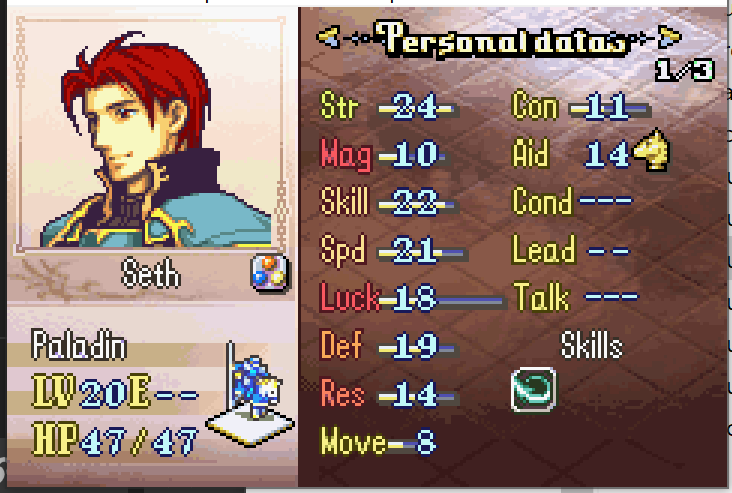 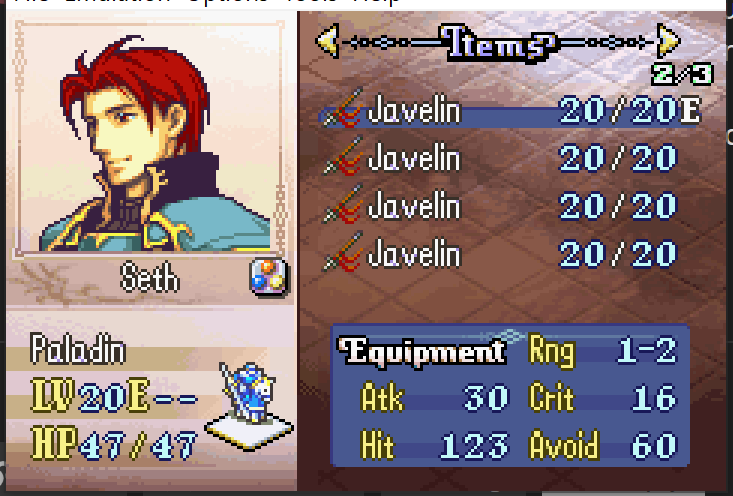 Don’t worry, I’m gonna do something similar to this lol.

A public graphics repository for Fire Emblem portraits, battle animations, map sprites, and other assorted graphics people might like to use. - FE-Repo/Battle Animations/Mounted - Pegs, Wyverns, Gr...

Why Javelins?
…He can use Spears without any weight penalty after all.

Because Javelins are all he needs

I dunno if it counts as a separate day yet, but uh… proper…er Natasha replacement!

Who they are replacing: Natasha
Portrait:

Character Description: A young woman of two minds, interested in bloodlines… and definitely not blood.

Another weirdo! …probably the first foxgirl I’ve tossed at any one of these actually, huh. Weird.
Minori has a …somewhat? split personality, though it’s more magical in nature, she knows of every single action the other takes and she is able to swap at any point. ‘light’ is more perseverant and generous, while ‘dark’ is more ambitious and confidant. Aside from those ‘personality biases’ the rest of her personality stays intact. Generally ‘dark’ comes out in more stressful situations. She’s also a healer with hemophobia, doesn’t that just suck?
If you’re lazy or something ‘light’ would probably just be the one for cutscenes and ‘dark’ would be the gameplay one, or just use whichever the whole way through, your choice really.

@Omnifox999 i played the pme recently and i leveled up garrison but his speed doesnt ho up despite him having a 100% Speed growth.

Who they are replacing: Tana character Description: an adoptive daughter of king hayden

So, real quick, do you have a portrait in mind? Or am I gonna go repo diving again? Lol.

Who they are replacing: Duessel
Portrait:

Character Description: Someone who makes herself as unapproachable as possible so people don’t talk to her. Secretly likes cute things.

A public graphics repository for Fire Emblem portraits, battle animations, map sprites, and other assorted graphics people might like to use. - FE-Repo/Battle Animations/Infantry - (Axe) Brigs, Pir...


Basically a sword version of Panette from the new game in a way, but I made her before knowing Panette was a thing, haha.

Name: kalru
Gender: female anim but male character (I’m basing him on me and all my friends say I look just like a girl)
Class: Pegasus knight (I have become what I sought to destroy)
Growths:
(Feel free to tinker with these)
Hp:50
Str:20
Mag:50
Skl:50
Spd:60
Lck:0
Def:50
Res70

Link to Mug, if you have one
I guess just use something femine (one of my friends friend literally asked me if i was trans :<)

If you have any questions just text my discord, kalru#0413