Hi there! The title is probably a tad misleading since there’s…well only one thing in it right now, but I hope to eventually have more things in the future! I’m a very VERY novice romhacker and I don’t really have much skill in terms of animating or spriting, but I can splice if need be. Hopefully as I improve I’ll have more to contribute here, but in the mean time I’ll throw some stuff in here on occasion.

So in my quest to break traditions and gender-locked classes, I thought I’d start with a splice I made that could serve as the base for a male Valkyrie with a sword animation (since there…aren’t any sword Valkyrie animations, at all). Pretty much just spliced together with the Templar sprite by GabrielKnight and the sword animation for the male Mage Knight by Aruka and Kenpuhu. Palette was simplified a bit just to allow for a difference in outfit and horse banner color. 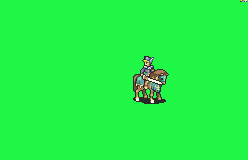 Any comments or suggestions are appreciated! If I didn’t give proper credit or there’s a preferred way of doing that on here, just let me know and I’ll happily edit this post to credit those responsible for the original assets.

Well staff animations seem to be fairly simple to make, so here’s a T1 Pegasus unit that now uses staffs. Well, the gif of it anyway. I have each individual frame made but I’ve got no clue how to actually make it into an animation from here.

This one just used the vanilla Pegasus animation and I used the staffs from the vanilla clerics/priests to design that.

You could extract other staff animations with Febuilder and look at the script to those and work from there.

But im almost certain that you could take a random vanilla staff script and add it to the frames of the pegasus and it would work.