Hey everybody, Runa here, famed creator of Runa Does A Thing (And Saves The World) [Featuring Dante from the Devil May Cry series]. I’m here to present to you a new project that’s been nagging at me for a very long time. I came up with the main ideas for this project in April of 2018, and I only started working on this project in September of 2019. A lot has changed since I first came up with everything, but this project idea has latched onto me for a very long time. I feel that I need to do this project justice by making it a reality. So, I present to you:

Fire Emblem: Last Heavenly Throne is an FE8 ROMhack made using buildfiles. The hack is split into several different parts, as this hack takes quite a bit of inspiration from Fire Emblem: Radiant Dawn and Fire Emblem Echoes: Shadows of Valentia. I understand that both Echoes and Radiant Dawn have a bit of controversy when it comes to its gameplay mechanics and story, but I hope that this hack can still be enjoyable both in story and play.

Unfortunately, this hack is currently a work in progress, and as such it is lacking a bit of polish. Some songs from vanilla may be unchanged, and most characters are still lacking non-placeholder mugs! That’s why I’m hoping to post this, and hope for feedback and perhaps even some help. Of course, if people want to play it simply for their own enjoyment, that’s perfectly fine too! That’s what hacks are for.

What is the plot of this hack?

In the continent of Maghmeall, four nations stand.
The Principality of Heichalot, The United Macha, and the Kingdoms of Corbenic and Srughna.
The people of Maghmeall venerate beings known as the Wardbearers, deity-like figures who purged away corruption and impurity, allowing their descendants to live in peace.
The Wardbearers disappeared almost a millenia ago. The year is 879.
Conflict brews in the north, and begins to spread south as Heichalot declares war on Corbenic, encroaching on their border. Macha and Srughna are silent.
In Caer Rigor, a province of Corbenic, a young boy joins the fight against Heichalot’s invasion.
He hopes to do his grandfather, Sir MacCumail proud, and keep his village safe.
His decision changes the course of both Maghmeall’s devotion and fate. 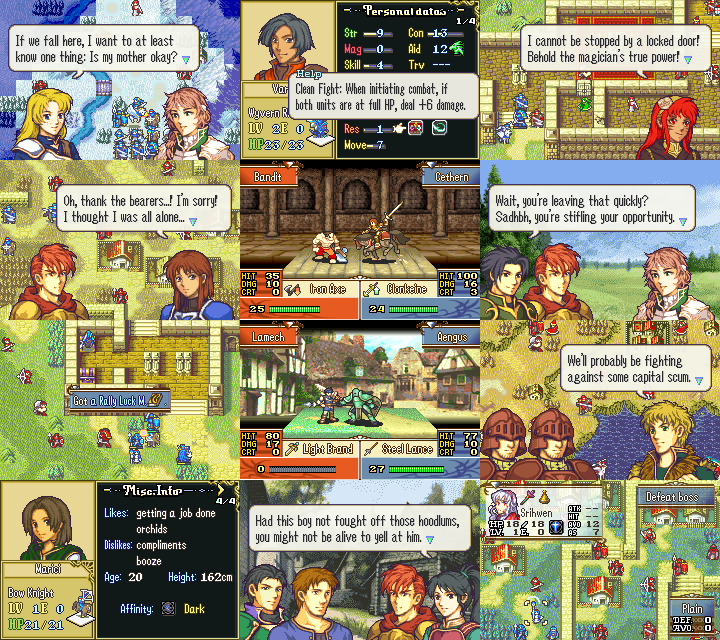 You can grab it right here!

Is there a Discord for this hack?

You bet there is! You can find it right here!
This is the best place there is to give feedback, report bugs or give help with the project.

Congrats on the release! Looking forward to trying this out

lets goo its at the top of the page now

Hello friends! Thanks to everyone who voted this project as Project of the Week.
I figured I should make an update post to show where exactly I am in this hack’s progress.
So let’s show some stuff off!

First off, we have some new mugs for two characters: Gedeon and Lalitha! That’s right, Gedeon is no longer Innes. Shoutout to Levin for Gedeon, and Glac, 2wb, Pikmin, and Levin again for Lalitha! 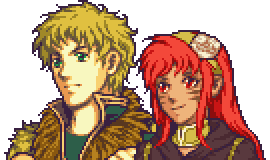 We have some new music, courtesy of myself. Unfortunately, it’s pretty tricky to show it off, so you’ll just have to trust me when I say it’s good.

The next part of this update post may have spoilers for Part 1 in it. If you haven’t played it yet, continue with caution :OOO

Thanks to everyone who has contributed to this hack in some manner, and thanks to everyone who has played it! I’ve been dealing with some personal issues right now that have made progress a little trickier, but I’m hoping to get yet further and finish all of Part 2 out before May. I am debating whether to release Part 2 in halves, along with the fixes for Part 1, so more information on the releases will come soon. Thanks FEU!

Is Srihwen a staff lord

If so I love this idea

I beat Act 1! It was a fun hack, and I’m glad I had the chance to play it! Now, it’s time for a long detailed review post, because those are apparently a thing.

Overall, I liked Last Heavenly Throne, at least what’s shown so far! The story is fine, the gameplay has some great chapters, it has a great Axe Cavalier (which I always love), and an incredible soundtrack to top it all off. Thanks for making this hack available on FEU!

Pretty Decent.
I had a lot of problems with this but overall it was good.
Let’s go over my pros with this and cons.

It’s been a minute since I posted but I wanted to give my thoughts on this. Hope I didn’t screw up.
-Kaiden

Since it’s been almost a month, I figure I’d give another progress update! I’m still dealing with a bunch of issues that make motivation for progress a little trickier, but I’ve still tried to get a bit done this month! There may not be as much as last month, but I’ve still been working! :OOO

I guess I should start by saying what exactly I’m working on currently. Part 2 is not what I’m working on right now, and its progress is close to the same as it was last month. I’ve been trying to polish Part 1 as much as I can, with feedback from the community (shout outs go to @RandomWizard, @KaidenMelon, @Tequila and @Bloopy for their helpful feedback, there were others of course but those are the ones I remember). A huge part of that polish is reformatting all of the text currently in the game to no longer use AutoNewLine. I love AutoNewLine, but after using it for a while, I’ve weighed the benefits and downsides for having it in my hack. And after some thinking, that has led to me having to redo all of my text. Luckily, I was already planning on doing a bunch of dialogue rewrites, so it’s not as bad as it could be! However, it is a bit tedious, and I’m trying my hardest to get through it!

Okay, now for the stuff you actually came for. Here’s some new mugs for the dastardly defense tank siblings, Aengus and Ethniu! Thanks to @Levin64 (god bless his soul) for Ethniu, and Vlak (don’t know your forum name sorry!) for Aengus! 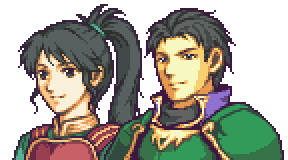 Thanks to everybody for your support! I’m hoping that I can get to a good place in March to get some heavy work done (at least before Animal Crossing comes out and takes over my entire life). Hopefully a release will be sooner than 20XX!

Def want to playtest this at some point, so I, too, can bask in the glory of Malkuth I.

I like how everything has been going. Those portraits looks pretty nice as well. Rewrites and stuff can take awhile I hope you feel like you’ve accomplished more before you enjoy Animal Crossing.

wait, your sibling get caught so you (IDK if my eyes deceived me at the script) went a random fort instead of saving her?
and the jeigan’s name is good , teach me how to pronounce this shxx,

They’re just placeholders, it doesn’t matter what they are since they’re getting replaced anyway.

and what is Mayhaps lol fusion words

i looked it up to make sure it’s a real word and realized it’s mayhap, not mayhaps :L

I played through the entire public release on my twitch stream! Normally I plan to add a written review section when playing hacks, but I honestly had very little to criticize while playing blind. My entire playthrough and commentary is available through this vod:

I just want to finish by saying I very much enjoyed the current release of LHT, and I highly recommend that other people consider trying it.
Hack Good.

Today on the list of things Runa is doing instead of being productive:

(shoutout to vlak for icons)