The patch is currently set to be written to 0xD01000, let me know if you need assistance in writing it somewhere else (the reason i didn’t use my patcher + script is because the way the “link” is done is pretty specific in this case).

It’s “prelimfix” because I have plans to make the fix more extensive - I’m going to see if I can’t compress the data table in memory a bit more and eliminate the last few bugs.

Contrary to what the title may imply, this fix doesn’t actuall have anything to do with the IIBF patch included in FEditor

it turns out i screwed up the patcher format

I suppose this is for FE7 only. Is it possible to research this for FE8?
It would be awesome, especially with skills becoming a thing thanks to @Brendor . Btw my forging system also requires a lot of icons due to materials and new weapons, etc etc.
Also this would be useful for Sacred Shell in the future.
Maybe @Venno or @CT075 or @Crazycolorz5 or @jjl2357 could look at this?
Thank you so much!

are you sure the glitch exists at all in FE8?
@AlfredKamon

Huh, oh… I’m not.
I just assumed it had the same problem, so I’ll be checking this out and tell ya.

@CT075
Excuse me, I let FEditor eat the space where your patch would go. In order to avoid having to redo everything, would you be able to rewrite your patch somewhere else? If you need a specific place to focus on, there’s plenty of free space at 0x01015980.

My apologies, but it still doesn’t seem to work. I uploaded the edited patch below, but when I inserted it the problem persisted. Strangely, the icons work fine until Icon 0xB8 and after (I’ve tested it up to 0xC0), so I think your patch is simply not being read. Any ideas?

well considering the original issue started at like 0x80, I suppose the fact that anything changes at all is a start

if you throw me a patch (like, the actual version of your game that has the bug), i can try to see what’s up (and/or install the fix manually if i have to)

so it appears my original recollection of the bug was wrong and that 0xB8 is in fact the correct cutoff for the original bug. That’s annoying. You should still throw me a patch so I can see where it’s going wrong (i would fix the fix patch for you except it works for me locally so it’d be less of a hassle for everyone if i just installed the fix for you)

Sorry Cam. Got really busy and forgot about this.
So, I tested it and nothing happens.
Maybe I’m doing something wrong?

I open GBAGE and go to 5926F4, set it to be 32x28 tiles and export it, then I resize it to 32x32 and add some icons in that new space, I import the new file into free space and I toggle “repoint graphic pointers”. It confirms that it has repointed two pointers. Then I open Nightmare and set one of the items to have an icon past the previous limit, but instead of loading any graphics, it displays a glitchy mess.
Did I miss something?
Otherwise I assume it doesn’t work.

This patch isn’t made for FE8; I was wondering if the issue exists in FE8 at all (because if it doesn’t it would save me the problem of tracking down how to fix it)

Yeah I assumed so.
Hextator made a patch that allowed to display more icons, but said patch had a few issues so you made a fix for it. Did I get it right?
So if I can’t get it to show more icons by just replacing and repointing the graphical thing, I suppose I need something akin to hextator’s patch for FE8?

/ maybe I just don’t get what the problem is, it’s been a long time since I last checked that topic

in fe7, if you have an icon from beyond a certain point, loading and reloading it repeatedly causes the icon to bug out (for example, random things will turn into vulneraries)

Ok then I don’t get why the repointed graphics aren’t even showing properly. I assume I did something wrong. Need to further investigate this, I’ll get back to you when I have more information

FE8 item icons 0xE8 and up display correctly the first time, but after that they get replaced. 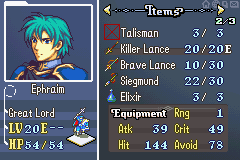 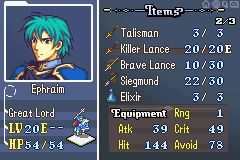 The shop seems to work fine though.